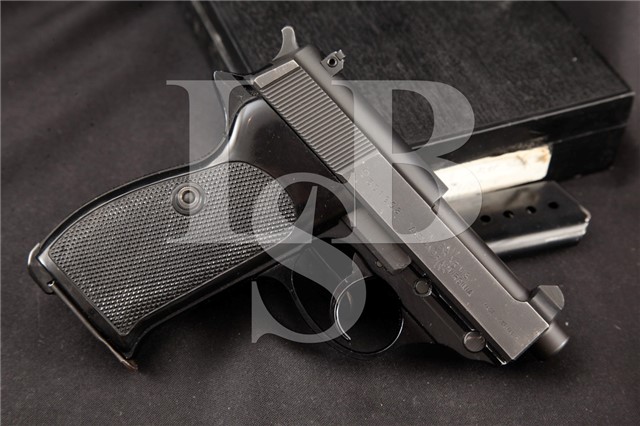 Sights / Optics: The pistol is mounted with a flat topped square notched rear sight dovetailed into the slide and secured with a set screw. The front sight is a blade with a slightly ramped rear face and a curved front face that is fixed to the top of the slide. The rear face of the front sight has a small white dot and there is a small white square under the notch in the rear sight, creating a two-dot aiming system.

Stock Configuration & Condition: The grips are black checkered plastic with shallow thumbrest on the left side and a cutout for a “D” shaped lanyard ring at the bottom of the left grip. The grips enclose the backstrap. There are a very few light marks in the smooth borders of the grips with several tiny dings and a few scratches on the bottom surfaces. The checkering shows light wear without mars. The grips rate in about Excellent overall condition.

Type of Finish: The slide and barrel have a matte black finish. The alloy frame is painted bright black.

Finish Originality: The finish is original. All of the markings are crisp.

Overall Condition: This pistol retains about 97% of its metal finish. There is thinning on the edges of the slide and de-cocker, with several light marks in the top and right side of the slide, a small scratch in the trigger bar and a tiny mark through the finish in the trigger guard. The slide serrations and the serrations on the small parts are sharp. The markings are crisp. Overall, this pistol rates in about Fine to Excellent condition.

Mechanics: The action functions correctly. The double action trigger pull is a little stiff, and the single action pull has a small amount of creep. This pistol was not designed with a magazine disconnect, but does have a decocker on the left side of the slide, which does NOT function as a safety. The slide is tight to the frame. We did not fire this pistol. As with all used firearms, a thorough cleaning may be necessary to meet your maintenance standards.

Box, Paperwork & Accessories: This pistol comes with a total of two blued 8 round magazine and a factory box. The magazines are marked on the left side with a Walther banner logo and “P38  9mm”. The magazines show minimal wear and are in Excellent condition. The box is black plastic, marked on the lid with a black on silver Walther banner logo. The inside of the box is fitted for this pistol and accessories. The box shows several light marks on its smooth sides. The box is in about Fine condition.

Our Assessment: The P38 was the first locked breech pistol to have a single action/double action trigger and used a de-cocker instead of a safety to lower the hammer and allow the pistol to be carried hammer down on a loaded chamber. These features are still in use today on modern pistols such as the Beretta Model 92. The P38 was adopted as Germany’s main service pistol at the beginning of WWII and during the war, it was made by both Mauser and Spreewerke in addition to Walther. After the war, P38’s were manufactured by the French using captured Walther machines, and Manurhin was eventually licensed by Walther to produce the pistols commercially. In 1955, West Germany was allowed to reestablish its armed forces and Walther secured a contract to produce pistols for the newly established Bundeswehr. In 1963, the Army formally adopted the pistol as the P1, while the P38 continued to be made for commercial and police use. The post-war P38’s and the new P1, which were essentially the same pistol, were different than the wartime P38’s in that they were both made with aluminum frames. In the 1974, the P38-K was developed by shortening the barrel and slide, moving the front sight from the top of the barrel to the top front of slide. The safety mechanism of the decocker was eliminated, so now the decocker is only a decocker – when you depress it, the hammer falls, and when you release it, the decoder springs back up into the FIRE position. The grip frame was kept the same size so that P38 magazines could be used. Although this model was made from 1974 to 1981, only 2600 were made. This P38-K pistol is in about Fine to Excellent condition, and comes with its factory box and two magazines. This compact pistol would make a great carry pistol, but with only 2600 having been made, and given the nice finish remaining on this pistol, we think the Walther collectors will be very interested. That is almost a shame, because we like the fact that the safety was eliminated: it now acts like a double action revolver – when you pull the trigger, it fires. The shooters out there are going to miss out on what we think is an improvement to the P38/P1 design in a compact form.