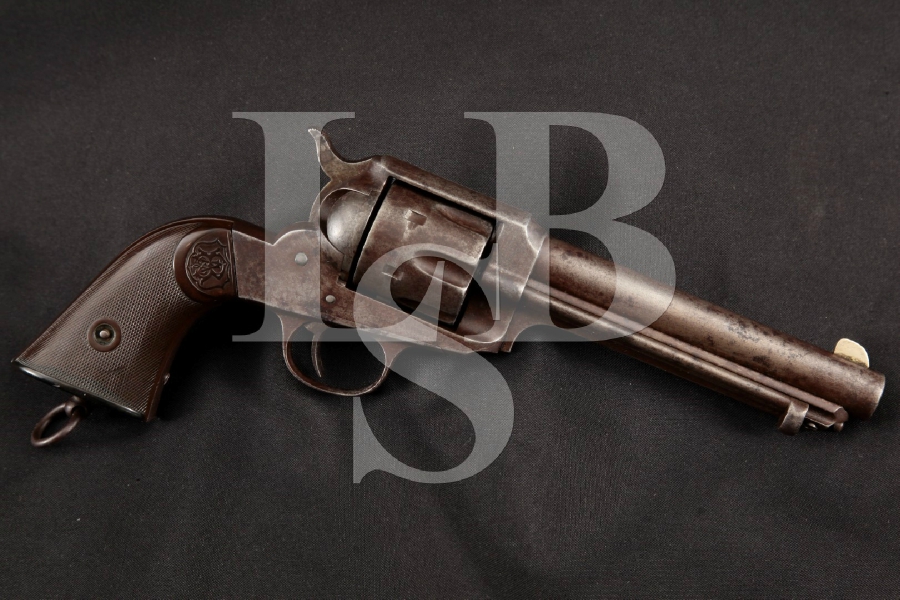 Barrel Length: 5 3/4″, which is a length indicated in Flayderman’s Guide; we do not believe the barrel has been cut down, there is some loss of definition at the muzzle that may be from holster wear before the new finish was applied. If it was ever cut down, the job was done well.

Sights / Optics: The front sight is a quarter-round German silver blade, fixed to the barrel, the top of the frame is ‘pinched’ and produces a shallow “U” sight.

Stock Configuration & Condition: The grips are browned hard rubber panels with “R A Co.” monogram on the upper flanks, which borders the flank’s checkers. The grip frame butt has a lanyard ring installed. There is rubbing and compression in the checkers, the butt of the right panel has a large chip loss. The grips fit the straps very well. The grips rate in Very Good overall condition.

Bore Condition: The bore is dark, the rifling is still defined but worn. There is surface erosion and pitting in the bore.

Overall Condition: The underside of the barrel is protected by a web-like ejector rod housing. When removed, the barrel still shows factory bluing at depth! The other surfaces have a mottled gray and brown patina, this is a really honest looking piece that has seen many a moon. There are scabs of erosion and mild pitting on most surfaces. The screw heads have bow-tied slots. The markings are clear, some are still raised and crisp. Overall, this handgun rates in about Very Good condition.

Mechanics: The action functions correctly. The cylinder produces about 1/8” side to side with 1/32” back play in all 6 chambers. The hammer’s spring is very heavy but does the job. We do not recommend firing this pistol. We did not fire this handgun. As with all used firearms, a thorough cleaning may be necessary to meet your maintenance requirements.

Our Assessment: From https://en.wikipedia.org/wiki/Remington_Model_1890 “The Remington Model 1890 New Model Army was a revolver by the Remington Arms. It was a based upon the successful Remington Model 1875 and the lesser known Model 1888 with both revolvers having the same size, appearance, and the removable cylinder. The 1890 Remington single-actions kept the solid frame and similar styling of the 1875 model, but lacking the large web under the ejector rod housing and equipped with checkered rubber grips. Like the 1875 model, the 1890 was suitably made for metallic cartridges, but only issued in .44-40 caliber.[2]” This pistol has seen a full life but the mechanics are still functional and the nice Remington monogram grip panels tie it all together. This pistol was made when America’s expansion west was in the middle of danger and adventure. This one looks to have been there and done that; how it ended up in Southern California in 2017 is anyone’s guess. With many stories to tell of its own, it can now be in your safe, to admire for generations yet to come.