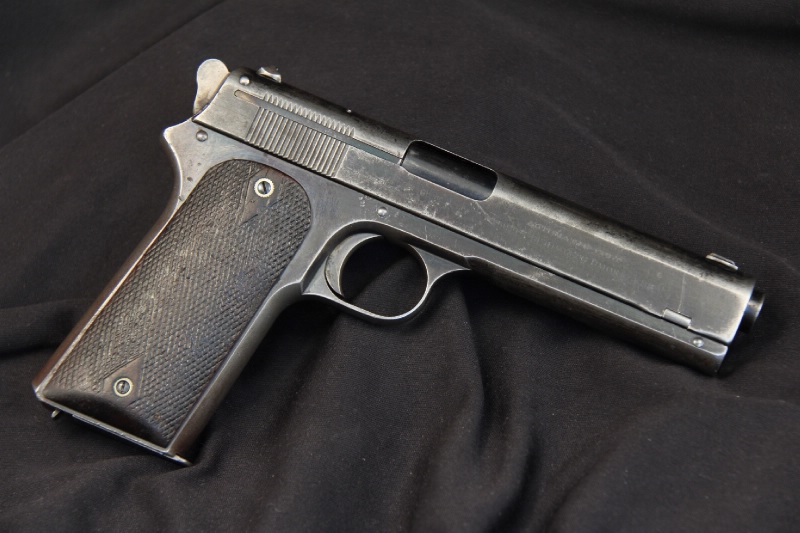 Make: Colt
Model: Model 1905
Serial Number: 665
Year of Manufacture: 1906
Caliber: .45 ACP
Action Type: Semi Auto Pistol, Single Action
Markings: The right side of the slide is marked “Automatic Colt / Calibre 45 Rimless Smokeless”. There is an “E” in the forward right frame rail. The left side of the slide is marked “Patented / Apr 20 1897/ Sept 9 1902. Dec 19 1905. / Colt’s Patent Fire Arms Mfg. Co. / Hartford Conn. U.S.A.”. The rampant Colt logo, in a circle, is on the left rear of the slide. The serial number “665” is found on the left side of the frame. The left trigger guard bows are marked with the Verified Proof and a “W”.
Barrel Length: 5”
Sights / Optics: The gun is mounted with a standard dovetail set rear sight and a dovetail set, bead and blade front sight.
Stock Configuration & Condition: The grips are hand checkered wood. The checkering is qorn, though present and the panels are free of cracks and losses. The right panel shows more wear to the checkering than the left. The grips rate in about Good overall condition.
Type of Finish: Blue
Finish Originality: Factory Original
Bore Condition: The bore is gray and the rifling is visible the entire length, though somewhat worn. There is mild frosting throughout the length of the bore.
Overall Condition: This gun retains about 65% of its fragile original metal finish. This high polish blue is very fragile and is seldom seen on early Colt autos. This gun shows much original finish, with general thinning and edge wear throughout. The upper right edge of the slide shows some erosion. There is some marking on the right side of the frame at the trigger pin and two nicks on the right side of the frame, behind the upper ¼ of the right grip panel. The front and back strap show thinning, with a light patina forming. The hammer still has visible case colors, and the small parts show fire blue color. The Screw heads are very good, showing little use. The markings are all legible. Overall, this gun rates in about Very Good – Fine condition.
Mechanics: The action functions as designed, though we have not fired this pistol.
Our Assessment: The Colt 1911 is the best gun ever made, and this is the most important gun ever made. This gun was developed out of the partnership of Samuel Colt and John Moses Browning and was developed to meet the Military’s desire for a .45 Caliber automatic pistol. The military had previously purchased and tested the Colt Model 1902 in .38 auto, but found the round too anemic for the fighting conditions in the Philippines. The round simply was not effective. Browning responded with the development of the .45 ACP round and the 1905 Colt to fire it. The round proved itself, as did the gun in the 1907 trials, making Colt the primary firearm for Millions of Soldiers across decades and continents and making the .45 ACP round the round that all others will always be measured against. Whether your focus is American firearms, Military Firearms, .45’s or American Handguns – the Colt Model 1905 is one of those guns that literally changed the industry. This pistol belongs in every collection. 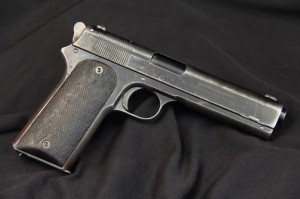