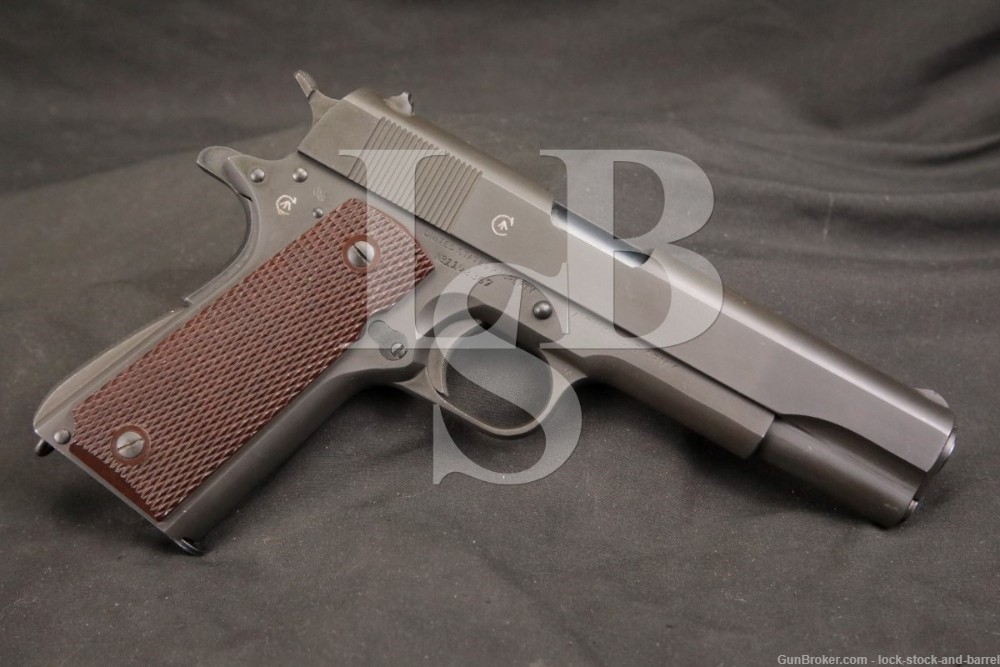 Stock Configuration & Condition: The grips are two-piece checkered brown “Coltwood” plastic with large reinforcement rings around the grip screws and reinforcement ribs on the interior. The grips have only a few scattered minor marks. The checkering is well defined. There are no chips or cracks. Overall, the grips are in Fine-Excellent condition.

Overall Condition: This pistol retains about 97% of its metal finish. The finish is generally strong throughout. There are a few light marks on the chin of the slide. There are only a few other scattered minor marks and minor operational wear. The screw heads range from sharp to lightly tool marked with strong slots. The markings are clear. Overall, this pistol is in Fine-plus condition.

Box, Paperwork & Accessories: This pistol comes with a single 7-round magazine, marked “L” on the floorplate.

This example was produced by Colt in 1943 as the design saw some tweaks and changes. This pistol was made after the switch to parkerized finishing and retains about 97% of its finish. It has the later-style ramped front sight which replaced the earlier rounded blade and a square notch rear sight which replaced the “U”-notches. The hammer has the original wide-spur which would soon be replaced by a spur of the same width as the body. The slide stop, thumb safety and mainspring housing are all checkered, each of which would eventually be serrated. The grips are the third type of Colt plastic grips with large reinforcement rings and reinforcement ribs on the interior. In all, this is a great example of a 1943 production Colt M1911A1. It was produced when the slides were still serialized, so it’s nice for the collectors to know that the slide is original to the frame.

There is also something of a mystery in the markings. The slide and frame each have a “C” surrounding a broad arrow which is typically found on pistols which went to Canada during Lend-Lease. These markings, however, are through the finish and have been applied with electric pencil, rather than stamped as we have seen on other examples. The pistol’s serial number is also outside of the range in which the Canadian guns are typically found. It’s not clear if this is an anomalous Canadian pistol or if the markings are spurious.

Otherwise, the pistol is in Fine-plus condition, retaining about 97% of its metal finish, a great bore and strong mechanics. It will make a nice addition to a Colt or WWII small arms collection. Please see our photos and good luck!