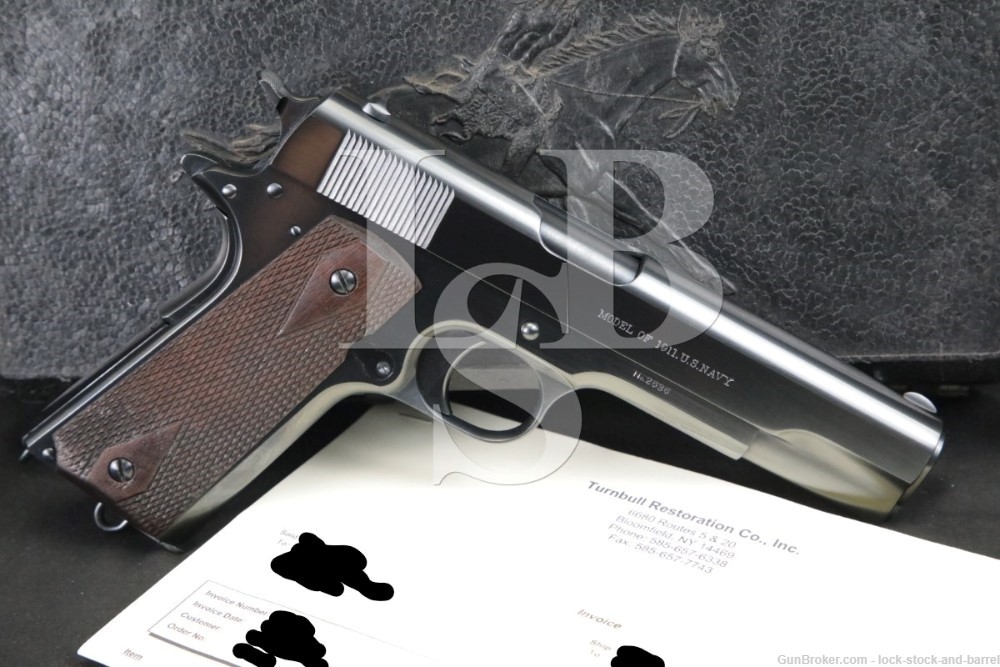 Stock Configuration & Condition: The grips are checkered walnut with smooth diamonds around the grip screws. Each panel has a few light nicks and scratches with wear in the checkering at the bottom. The checkering is generally well defined. There are no chips or cracks. Overall, the grips are in Very Good-plus condition.

Finish Originality: This pistol was professionally restored by Turnbull Restoration Co. The included invoice indicates that the rear sight and magazine catch release were replaced with period-appropriate types.

Bore Condition: The bore is gray. The rifling is worn, but visible, with some portions sharp. There is erosion and pitting scattered through the bore.

Overall Condition: This pistol retains about 99% of its current metal finish. There is no notable wear or damage, only light handling marks. The screw heads are lightly tool marked with sharp slots. The markings are clear. Overall, this pistol is in Fine-Excellent condition as professionally restored.

Mechanics: The action functions correctly. The trigger pull is crisp and the slide has minor play to the frame. We have not fired this pistol. As with all used firearms, a thorough cleaning may be necessary to meet your maintenance standards.

The U.S. Navy contract pistols with the early U.S. Navy marked slides and early style small lettering and serial numbers are probably one of the most difficult of the standard issue Model 1911s to acquire. There was a total of approximately 15,037 of these early style, U.S. Navy marked slides produced in total and this was changed (to standard U.S. Army markings) after 1915 as the Army, who was the Ordnance proponent for service pistols, wanted standard markings and serial number placement throughout the Model 1911 production.  So, their survival rate in original unaltered condition is extremely low, since they were in service for the next 80 years.

This is a Colt Model 1911 that was made in the first year of production, 1912, and was one of 3rd lot ever shipped to the Navy. The pistol has been to Turnbull Mfg. recently for a restoration and the result is a beauty to behold. Their carbona charcoal bluing is deep and rich, showing no notable defects. Many of the early features have been retained such as a mainspring housing pin which is convex on each end, though the 1st type magazine catch retainer and round-top rear sight were installed by Turnbull. The barrel used appears to be the one supplied to Turnbull as there is some erosion and pitting in the bore, but otherwise the gun looks like it could have been made yesterday. This is a neat early Colt 1911, and the Navy marked pistols were among the rarest. This pistol is destined for a high-end Colt or U.S. small arms collection. Please see our photos and good luck!