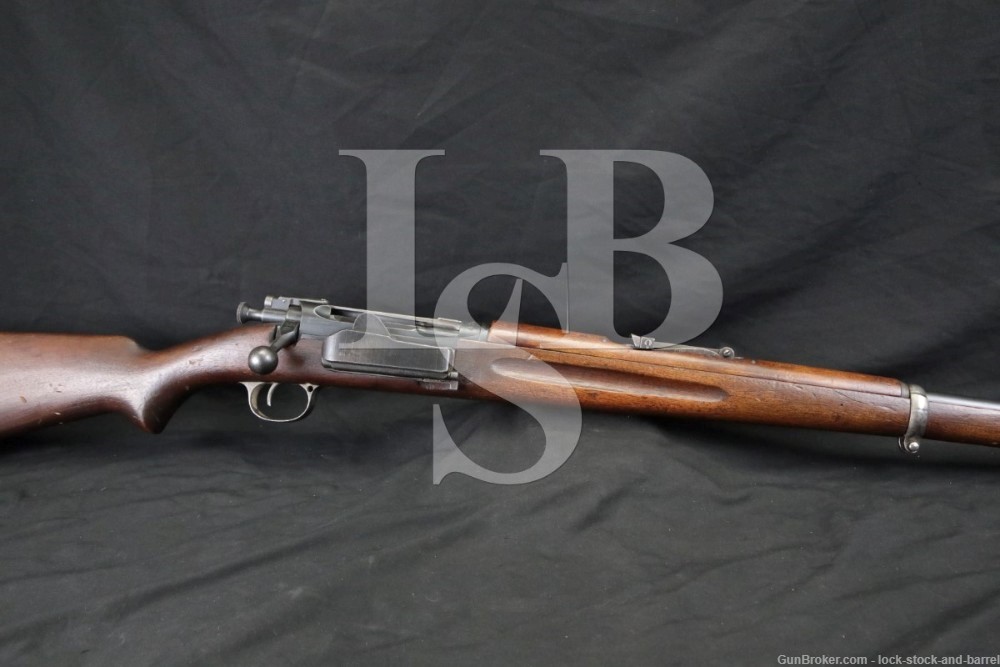 Sights / Optics: The front sight is an inverted “V” post set atop a raised base. The rear sight is a “U” notched blade attached to a sliding escalator assembly. It is marked from “1 – 21” in increments of 2 and “2200” at the top.

Stock Configuration & Condition: The hardwood stock has a pistol grip, cut out for the bolt handle, scallop for the magazine cutoff, finger grooves, 2 barrel bands, hole for the included cleaning rod, 2 sling points and a metal buttplate with hinged door for storage. The buttplate shows scratches and a freckling of surface erosion. The wood shows scrapes, scratches, and compression marks. The handguard shows a small crack at the rear of the rear sight. The crack does not flex. The LOP measures 14 inches from the front of the trigger to the back of the buttplate. The stock rates in about Very Good condition.

Bore Condition: The grooves are light gray. The rifling is deep. There is erosion in the grooves and at the muzzle.

Overall Condition: This rifle retains about 87% of its metal finish. The metal shows scrapes and scratches. The most prominent are on the top of the barrel. The trigger guard shows thinning. The top of the barrel and the trigger guard show discoloration from oxidation. The screw heads show substantial use. The markings are deep. Overall, this rifle rates in about Very Good condition.

Mechanics: The safety is stuck in the “FIRE” position. We did not try to force it.
The action functions otherwise. We did not fire this rifle. As with all used firearms, a thorough cleaning may be necessary to meet your maintenance requirements.

Our Assessment: This Norwegian / N@zi Stomperud Krag is a commercial variation of the Stomperud made up of leftover parts produced during German occupation during WWII or left over from prior production runs. True Stomperud Krags are “Shortened Krags” that were modified to conform to German K98 specifications. They were produced with a shorter barrel. This commercial Stomperud uses German marked parts and a left over 30 inch barrel. Good luck.