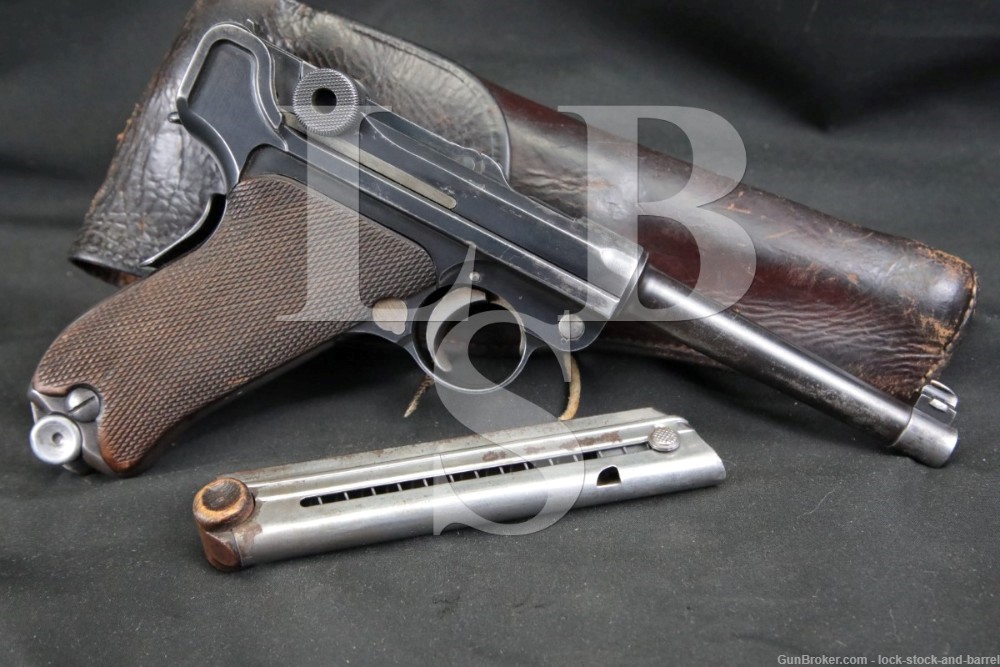 Make: Deutsche Waffen und Munitionsfabrik (DWM) later altered in Switzerland with a Hämmerli barrel and imported by Abercrombie and Fitch

Model: Custom Luger (1 of 100 handguns made for Abercrombie & Fitch in Switzerland with a mix of DWM and Swiss parts)

Stock Configuration & Condition/ Grip: The grip panels are two piece checkered wood. The grips have some light handling marks, nicks and scuffs. There are a few small notable nicks on the right panel. The checkering remains sharp. Overall, the grip panels are in Very Good condition.

Overall Condition: The pistol retains about 65% of its metal finish. There are scattered light handling marks, nicks and scuffs. Notably, the finish has largely worn off the front strap, the bottom of the back-strap’s finish has worn off, the barrel has scattered finish loss concentrated around the muzzle and flanks in addition to light finish loss along the leading edges. There are some scattered patches of light surface oxidation. The markings remain clear. The screwheads are only lightly tooled and remain serviceable. Overall, the pistol is in Very Good condition.

Box Paperwork and Accessories: There is a single magazine in the white with a wood base included with the pistol. The magazine has some scattered patches of light surface oxidation, but it remains in Very Good condition. The gun also comes with a blued Haenel magazine marked 122 over a NSDAP style eagle above “37” and its base is marked “9514 / f / +”. The magazine has some light wear but it remains in Very Good condition. Also, there is an aftermarket brown leather holster included with the gun.

Our Assessment: TThe Parabellum-Pistole, commonly referred to as the Luger, was designed by Georg Johann Luger. Luger was an unlikely gun designer, born in 1849 he was the son of a surgeon, Bartholomaeus von Luger, and while attending university he served as a One-Year Volunteer with the 78th Infantry Regiment (Infanterieregiment 78 ein) of the Austro-Hungarian Army. While in the military Luger proved himself a skilled marksman and he began to develop an interest in the small arms technology. Following four years of service Luger worked a number of jobs in Vienna. Finally, in the 1870s Luger met Ferdinand Ritter von Mannlicher who recruited him as a sales representative for Deutsche Waffen und Munitionsfabrik AG (DWM). One of the company’s weapons that Luger marketed was the Borchardt C93 (named after its designer Hugo Borchardt) which was criticized for being too heavy and poorly balanced. Luger decided to rework the design and eventually secured a contract for his new pistol with the Swiss Army which dubbed it the model 1900 which was chambered for 7.65mm Parabellum cartridges. After some minor reworking Luger introduced the Pistole 1904, chambered for 9mm cartridges, which was adopted by the Imperial German Navy, the pistol was henceforth referred to as the Luger. A slightly altered version of the pistol with a smaller barrel was adopted for service by the Prussian Army in 1908, hence the designation P08. The P08 would become one of the most iconic weapons of the 20th century. Following the end of WWI Luger was bankrupted, he had invested in War Bonds which had become worthless following Imperial Germany’s defeat and worse yet he was forced out of his job by his employer DWM which sought to appropriate his patents. The ensuing legal dispute between Luger and DWM would be decided in his favor in 1922, but he was financially ruined by that time and passed away the following year at the age of 74. His pistol would continue to serve the German military during WWII (although the P38 was the Wehrmacht’s standard issue sidearm) and saw service in a number military and police forces after the war.

Although the most famous variant of Georg Luger’s iconic design was the P.08, a variant was also adopted by Switzerland for military use. The Swiss adopted the Model 1900 chambered for 7.65mm cartridges in 1901 and a slightly improved variant superseded the m/1901 several years later, the Model 1906. These early pistols were manufactured by DWM and imported by the Swiss until 1918 when WWI turned decidedly against Germany, henceforth Waffenfabrik Bern began to domestically fabricate the M1906. It was eventually superseded by an improved variant in 1929. Standard issue Swiss Lugers were chambered for the 7.65mm cartridge until the Swiss Luger was ultimately superseded by the SIG P210, the 9mm cartridge was never formally adopted for use with Swiss Lugers although experimental variants were created. The Swiss Army managed to avoid being drawn into both World Wars and their Lugers are generally better preserved then the German ones which saw extensive service in both World Wars.

This specimen was exported by Switzerland to the United States and was imported by Abrecrombie & Fitch. A Swiss company fulfilled an order supplying 100 Lugers for Abercrombie & Fitch in 1922, they were given new barrels made by Hämmerli and about half were chambered for 9mm Luger and half for 7,65mm Luger (the Swiss Army never adopted Lugers chambered for 9mm parabellum rounds). This pistol from the Abercrombie & Fitch order is in the correct “i” suffix serial range, features the cross in sunburst logo on the chamber ring featured on the Lugers from the order, is in the correct serial range of 2162-3199 and has the distinct marking pattern used on the Abercrombie & Fitch Lugers. Although the front sight appears to have been replaced or altered and the breechblock has a non-matching number (the mismatched breechblock may very well may have been a factory error, it does not appear to be an aftermarket replacement but we are not entirely sure), otherwise the gun appears to be in its original configuration. This is a beautiful and exceedingly rare handgun that is both ergonomic and mechanically sound. For fans of the Luger, this is the gun for you. Good luck on your bid!