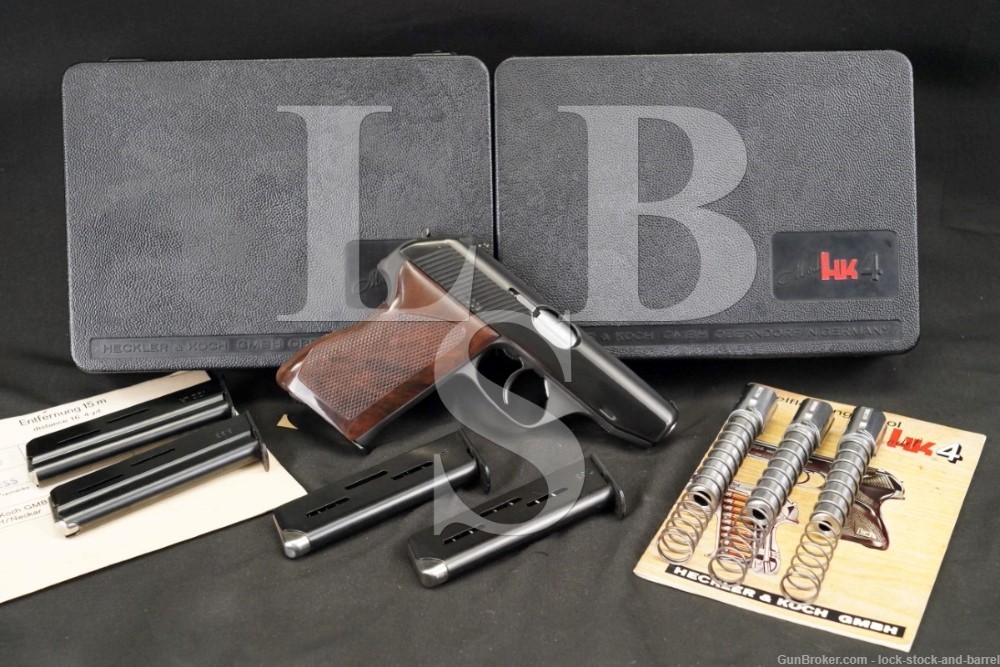 Year of Manufacture: 1967, The First Year of Production

Sights / Optics: The front sight is a low profile blade, which is integral to the slide, sitting in a “U” channel on top of the slide. The rear sight is a square notched base which is dovetailed onto the slide.

Stock Configuration & Condition: The grip is a one piece checkered brown plastic stock with nice color variation in the details, please see our pictures. The stock has a left side thumb rest; the stock has but a few light nicks & scuffs. There are no cracks or major damages. The grips rate in about Fine-Excellent overall condition.

Overall Condition: This handgun set retains about 98% of its metal finish. The finish shows some very faint marks on the shiny portions of the slide. The pistol looks to have been used infrequently and was well taken care of in the interim. The screw heads are sharp. The markings are crisp. Overall, this handgun rates in about Excellent condition.

Mechanics: The action functions correctly. The pistol has a heavy double action pull by design, the single action is crisp. The pistol takes four different calibers and can be converted for rimfire operation, though the rimfire striker is not present. We did not fire this handgun. As with all used firearms, a thorough cleaning may be necessary to meet your maintenance requirements.

Box, Paperwork & Accessories: Included are 5 magazines, two of which are for 9mm Kurz (.380 ACP), the others are for .22 Long Rifle, .25 ACP and .32 ACP. The pistol has a 9 Kurz barrel installed and comes with a .22 Long Rifle, .25 ACP and .32 ACP barrel with springs; these items have but a few light marks and rate in Excellent condition. The pistol comes in a factory box that has some light storage wear, rating in Excellent condition. Also included is the accessory box which houses the conversion magazines and barrels. This box too has light storage wear and is about Excellent condition. There is also a manual and test targets for each of the calibers tested, serial-matched to each barrel.

Our Assessment: Today, Heckler & Koch is well known as a pistol manufacturer from their USP series to the more modern P30 and VP series. In the mid-60s, however, they had never made a pistol. Heckler & Koch, quite literally, rose from the rubble of WWII, creating a metal fabrication company with what machines could be recovered from the Oberndorf Mauser factory. Initially producing parts for sewing machines and bicycles, they did not begin producing firearms until the ’50s, when they came out with the G3 in response to a request from the newly formed Bundeswehr. It was not until 1966 that H&K began looking into producing pistols with the HK4 being their first offering in 1967. The name came from the pistol’s ability to accept four different barrels in four different cartridges: .22, .25, .32 and .380. By changing the barrel, recoil spring and magazine, the pistol could be swapped between these cartridges at will, allowing for inexpensive practice, use of different cartridges based on availability and price. Though perhaps not as well known as pistols such as the PPK or HSc, the HK4 was nonetheless a commercial success and saw adoption by the German Custom Police. This example is from very early in production, before the need for import marks and with importation performed by Harrington & Richardson. The pistol is in about Excellent condition with barrels and magazines for all four cartridges, matching test-targets, and everything you need to use all four except for the rimfire striker assembly. This is a great example of HK’s first foray into the pistol market in great condition and with proper boxes for storage and display. Please see our photos and good luck!