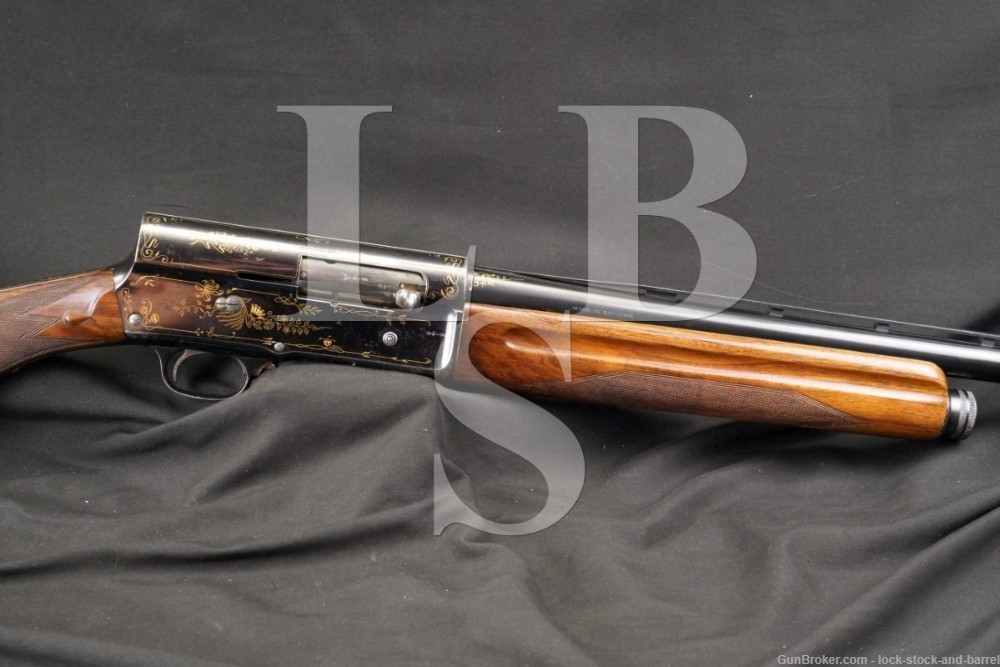 Make: Made by FN in Belgium for Browning

Sights / Optics: There is a white bead in a base mounted to the front of the rib. The top of the rib and receiver are serrated for glare reduction.

Stock Configuration & Condition: The stocks are two-piece checkered walnut with round-bottom pistol grip, straight comb, weave textured Pachmayr buttpad and finger grooves running the length of the forend. There is a thin crack in the right side of the grip and on the left side of the forearm. There is some material loss on the bottom of the checkering on the forend. There are sparsely scattered little nicks and draglines about the wood. The checkering is well defined where not interrupted. The LOP measures 14 3/4″ & 13 3/4” from the front of the trigger to the back of the buttpad and wood, respectively. The pad has light wear. Overall, the stocks are in about Good-Plus condition and would rate higher if not for the cracks.

Overall Condition: This shotgun retains about 83% of its metal finish. The finish is thinning at the edges. There are several scratches throughout the receiver as well as a light even layer of surface oxidation. There is a small streak of finish loss on the bottom of the receiver. There is also light finish loss on either side of the barrel near the. There are some scattered minor nicks and scratches on the barrel as well. The screw heads range from sharp to lightly disfigured with a useable slot. The markings are clear. Overall, this shotgun is in about Very Good condition.

Our Assessment: The Browning Automatic 5, most often Auto-5 or simply A-5, is a recoil-operated semi-automatic shotgun designed by John Browning. It was the first successful semi-automatic shotgun design, and remained in production until 1998. The name of the shotgun designates that it is an autoloader with a capacity of five rounds, four in the magazine and one in the chamber. Remington Arms and Savage Arms sold variants called the Remington Model 11 and Savage Model 720 that were nearly identical but lacked the magazine cutoff found on the Browning. Browning Auto-5s are cool. Pre-War Auto-5s are even cooler. Pre-War Grade 4 Auto-5s with the distinctive gold-filled type VI engraving are among the coolest. This example is a 12 gauge made in 1925. It looks like this gun has actually seen some responsible use in the field. This will make a neat addition to a Browning collection and would make for an eye-catching gun at the range or a classy field gun for the lucky winner. Please see our photos and good luck!