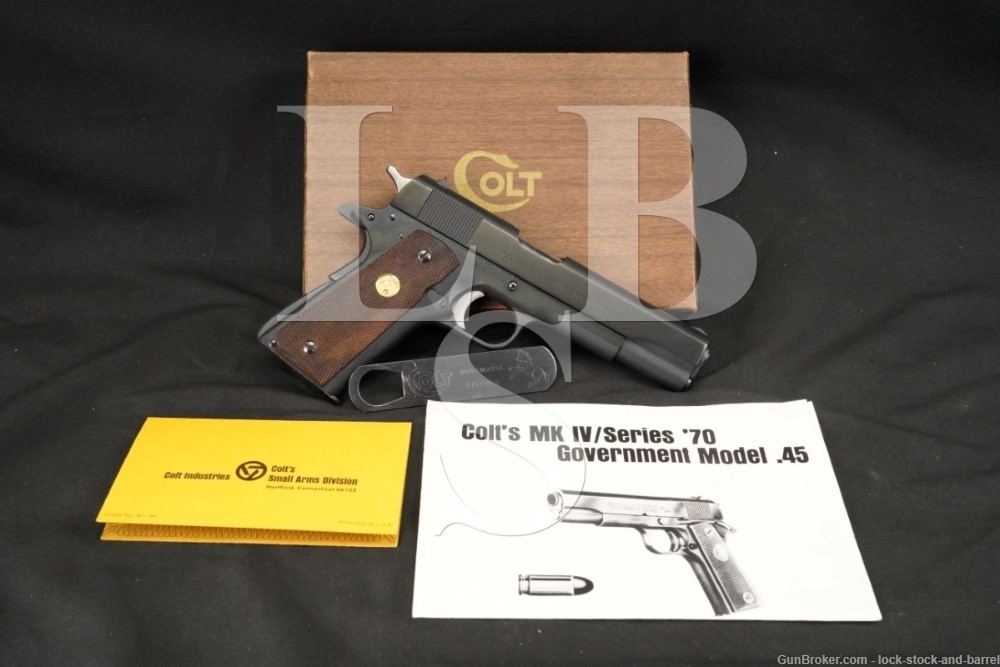 Stock Configuration & Condition: The grips are two-piece checkered walnut with gold-colored Colt medallions. The grips have no notable wear or damage, only light handling marks. The checkering is sharp. There are no chips or cracks. Overall, the grips are in Excellent condition.

Bore Condition: The bore is mostly bright and the rifling is sharp. There is no erosion in the bore, but there is some stubborn fouling, mostly along the edges of the grooves.

Overall Condition: This handgun retains about 98% of its metal finish. The action shows light operational wear. The sides of the trigger have spots of wear consistent with a previously installed trigger shoe. Otherwise, there are only light handling marks. The screw heads are tool marked with strong slots. The markings are clear. Overall, this pistol is in Fine-Excellent condition.

Mechanics: The action functions correctly. The trigger is crisp. The slide to frame fit has barely perceptible play. We did not fire this firearm. As with all used firearms, it may need a thorough cleaning to meet your maintenance standards.

Box, Paperwork & Accessories: This pistol comes in a two-piece cardboard Colt box with a worn, but serial-matching label, Colt branded bushing wrench, manual and a single 7-round magazine marked on the floorplate with a rampant colt, “COLT / 45 AUTO” and “M”. The magazine has light operational wear, intact feed lips and a strong spring. The wrench has use-wear. The box has light storage wear.

Our Assessment: The 1911 and 1911-A1 pistols served the military of the United States from 1911 to 1985, through two World Wars and the Korean and Vietnam wars. They gained a reputation as a reliable handgun with plenty of stopping power, and are held in high regard by those who have used them. The design was the end-result of a series of developments by famous gun designer John Browning, starting with the Model 1900. The advances made by Browning were revolutionary at the time, and were so successful that they are considered commonplace today. Browning not only developed first a pivoting and then a tilting barrel to allow for a locked system, he developed the concept of “the slide”, which is now synonymous with semi-automatic handguns. Having secured a contract for the US Military sidearm, Colt also offered the pistol to the commercial market as the “Government Model”.

This is a Colt MK IV Series ’70 Government Model from 1971. The descendent of the original Model of 1911, it has updates of the 1911-A1 as well as a collet-style bushing to improve accuracy. The pistol is in Fine-Excellent condition with about 98% of its blue finish, a strong bore and mechanics. This would make a great recreational shooter, carry, or home defense gun for the 1911 fan. Please see our photos and good luck!