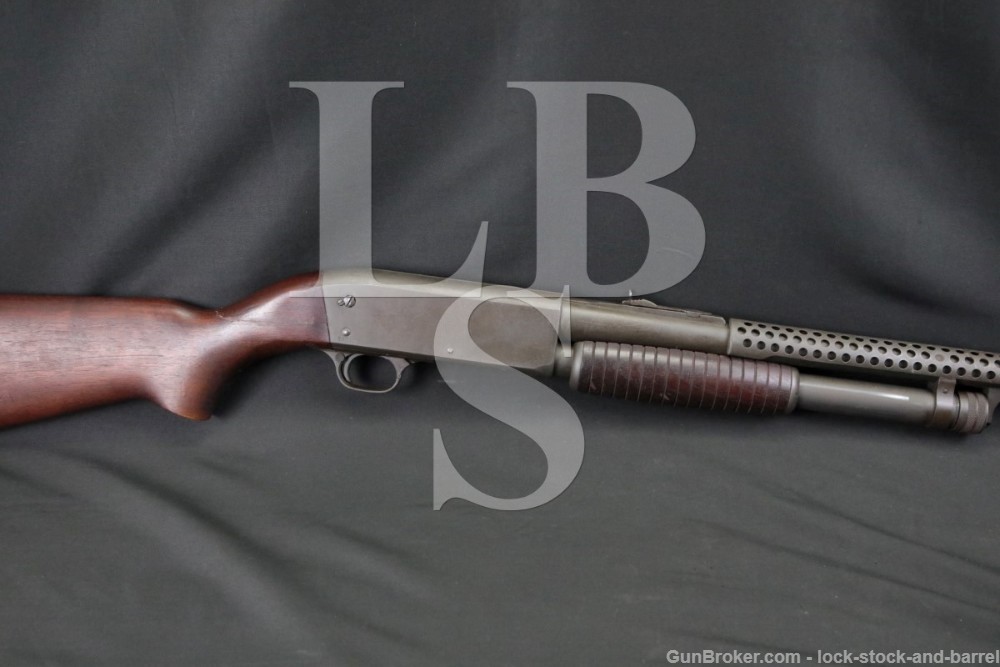 This is an Ithaca Model 37 Military & Police. Similar to the Featherlight D.S. Police Special, the M&P model featured a durable parkerized finish and plain oil-finished walnut stocks in lieu of the commercial blue and checkered stocks found on other models. Essentially the same as the Riot guns sold to the US Military during WWII, the DSPS and M&P models could be purchased with bayonet lug/heat shield assemblies but were offered with a greater variety of chokes, while the trench/riot guns made for the Military were all Cylinder Bore. This 1965 vintage gun was made before the introduction of a new style of bayonet lug and before Ithaca limited the choke options. Its 20″ barrel is choked Modified and it uses the original bayonet lug design. The gun is in Very Good-plus condition with fairly light handling wear considering its age and intended use. The bottom of the grip is stamped with “O H P”, though we have not been able to find comparable examples or documentation to conclude whether this is a personalization from a previous owner or the marking from some law enforcement agency such as the Oklahoma Highway Patrol. Despite the damage incurred from shipping—PLEASE LOOK CLOSELY AT THE IMAGE GALLERY—this is still a nice example of one of the more desirable Featherlight models, great to add to an Ithaca collection. It wouldn’t be too shabby for home defense either, especially with a bayonet hanging off the front of it!