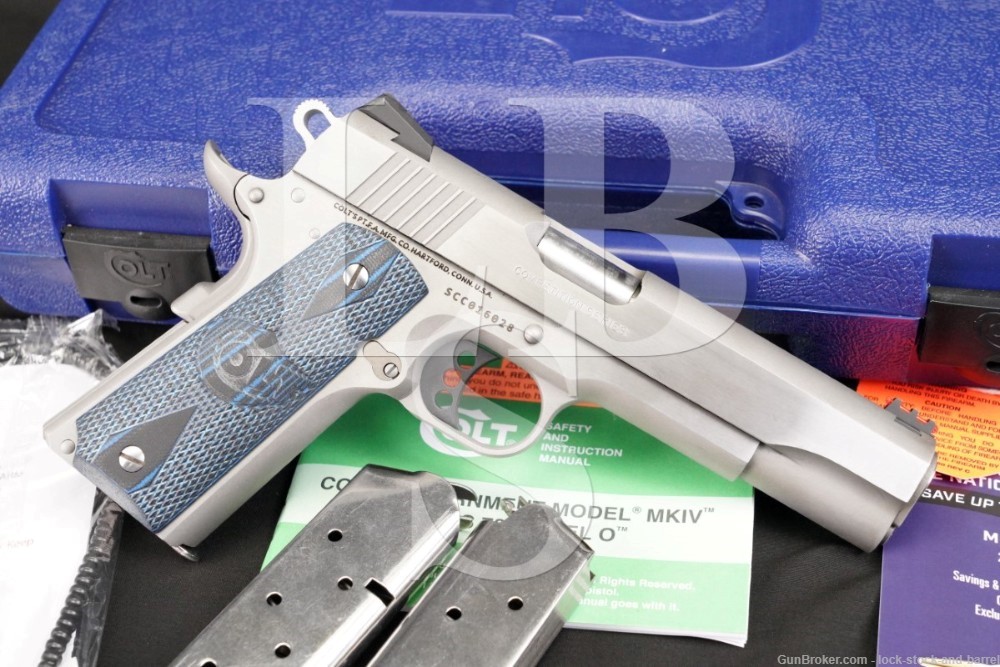 Markings: The left side of the slide is marked “GOVERNMENT / -MODEL-“, “COLT”, “AUTOMATIC / CALIBER 45” and with a rampant colt logo, the right is marked “COMPETITION SERIES”. The right of the frame is marked “COLT’S PT. F.A. MFG. CO. HARTFORD, CONN. U.S.A.” and with the serial number. The top of the barrel is marked “-COLT 45 AUTO N.M.-“. The left of the trigger guard is marked “VP” in a triangle and “L”.

Bore Condition: The bore is mostly bright and the rifling is sharp. There is no erosion in the bore, but there is some stubborn fouling along the edges of the grooves.

Overall Condition: This pistol retains about 97% of its metal finish. There are some scattered minor scuffs and scratches. The action shows light operational wear. The screw heads are sharp. The markings are clear. Overall, this pistol is in Fine condition.

Mechanics: The action functions correctly. The slide has minor play to the frame. The trigger is crisp. This pistol was not made with a firing pin block safety. We did not fire this pistol. As with all used firearms, a thorough cleaning may be necessary to meet your maintenance standards.

Our Assessment: Colt’s 1911 served the United States military through two World Wars and several other conflicts, is still in use by some units today, and has become popular with law enforcement, competitors, and recreational shooters across the nation. The design has seen some updates including a firing-pin block safety, higher profile sights, and more ergonomic grips, but the basic design and fantastic trigger remain the same after more than a century. This example is a stainless steel Competition Series model chambered for the .45 ACP, able to hold eight rounds in its single stack magazine. While marketed as a Series ’70, this pistol has a standard bushing, not a collet style bushing, though it does not have the Series ’80 firing pin block. The Competition Series has upgraded sights, beavertail grip safety, skeletonized hammer and trigger, and an under-cut trigger guard. This example is in Fine condition, appearing to have seen some gentle use. The pistol comes in its original box with three magazines and manual. If you’re looking for your first 1911 or your last, this would be a good pony to add to the stable. Please see our photos and good luck!