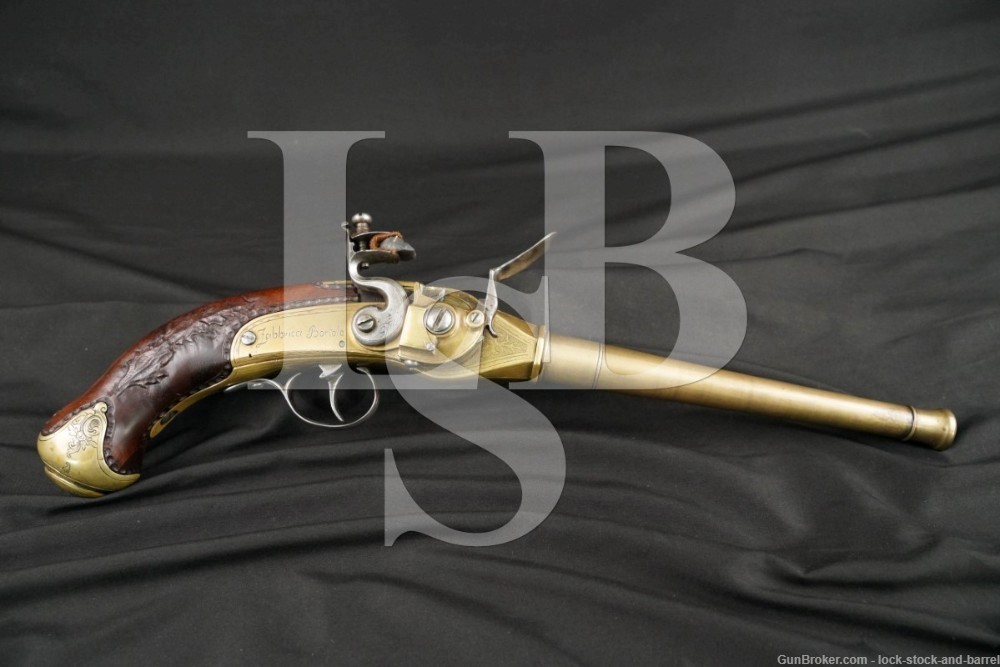 Markings: The right side of the frame is marked “Fabbrica Bortolo”. There is floral scroll engraving on the frame and grip-cap.

Stock Configuration & Condition/ Grip: The refinished grip is one-piece featuring the breech compartment on the left side of the brass frame, the action on the right side of the brass frame and an engraved pistol grip with a brass cap. The grip has some light handling marks, nicks and scuffs. Notably, there are some light handling marks on the grip including a patch repair at the front of the grip where it meets the cap. The engravings are still mostly clear. Overall, the grip is in Fine condition for an Antique.

Bore Condition: The bore is grey and coated in scattered verdigris.

Overall Condition: The gun retains about 55% of its brass finish. The brass parts are lightly tarnished, have some light handling marks and a few scattered spots of light surface oxidation. The bright parts are coated in very light surface oxidation and have some light handling marks. Notably, the internal metal parts of the gun are coated in moderate-heavy oxidation, visible when the breech is opened. The markings remain clear. The screwheads are lightly tooled and remain serviceable.  Overall, the gun is in Fine condition for an Antique.

Mechanics: The action functions correctly. The gun is loaded by opening the magazine compartment on the left side of the frame (we are unsure how many balls this gun chambers but it was typically 7) by loading balls into the upper section of the compartment and black-powder on the lower section. The lever is used to cycle the balls and the gun which is otherwise fired like a standard flint-lock. We have not fired this pistol. As with all used firearms, a thorough cleaning may be necessary to meet your maintenance requirements.

Our Assessment: The Lorenzoni system was a unique breech-loaded repeating flint-lock ignition action which was developed in Italy in the late 17th century. The system is named after Michele Lorenzoni, a Florentine gunsmith, who is credited with inventing the unique action (although there is scholarly debate over whether he actually invented the action). Lorenzoni was employed by the Medici court and the earliest reference to Lorenzoni’s work is a repeating gun he sold to Johann Georg III of Saxony (1647-1691). The action was popular and replicated by gunsmiths across Europe throughout the 18th century. This design was arguably the progenitor of the modern revolver (more information on the design can be found at the following link).

This particular Lorenzoni was manufactured by Fabbrica Bortolo, likely an Italian gunsmith operating in the 18th century (we do not have any information on the company). The gun is beautifully crafted with scroll engravings on the frame and floral engravings on the grip, these guns were considered luxury items even in their own time and remain highly coveted. This is a great option for fans of historical firearms and Antiques more broadly. Good luck on your bid!