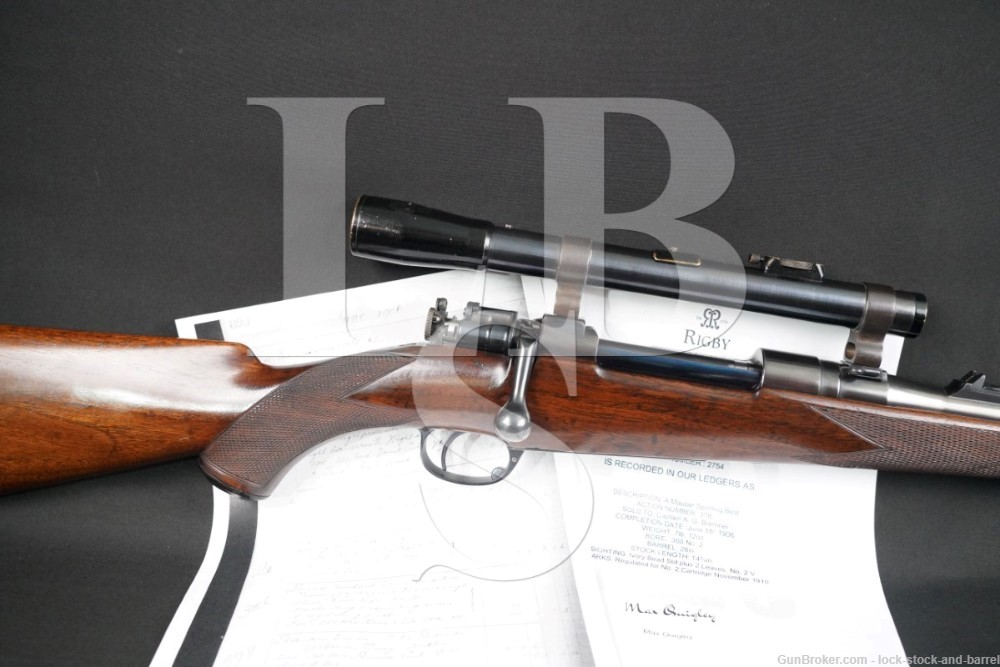 Sights / Optics: The front sight is a brass beaded blade in-line dovetailed to a hooded, ramped base at the front of the barrel. Information from the Rigby ledgers indicates that the rifle was originally equipped with an ivory bead, indicating that the bead if not the blade has been replaced. The rear sight is an Express-style sight with one fixed and two folding “V”-notches, marked “100”, “300” and “400” in ascending order. The folding notches each have a vertical platinum line, the fixed notch appears to have had its aiming reference groove filled with white paint. The rear sight assembly is dovetailed to a base fixed to a boss at the rear of the barrel. The rear of the bolt has an aperture sight which can be raised for use or lowered when not in use by rotating a disc on the rear of the bolt assembly. The top of the barrel shank has a boss with a dovetailed front scope base, there is a rear base integral to the bridge of the receiver. These bases accept quick-detach see-through rings holding a John Rigby marked scope with a German post-style reticle. The scope is adjustable for elevation with markings of “100”, “2” and “3”, fine-click adjustable between the markings. The scope has some scattered light wear on the body and the eyepiece has barely perceptible play to the body. The glass is fairly clear, but the lenses could use a good cleaning.

Stock Configuration & Condition: The stock is one-piece checkered walnut with a capped pistol grip, straight comb, serrated steel buttplate with trapdoor storage compartment (nothing in the compartment) and a sling eyelet in the belly (there is a sling mount banded to the barrel forward of the forend). The stock has some scattered light nicks with a few more notable marks on each side toward the rear. These marks are dark and have been finished over. There are only a few scattered minor marks in the current finish. There is a repaired chip at the toe. The checkering has been re-cut and is still well defined. There are no cracks. The LOP measures 14 3/4” from the front of the trigger to the back of the buttplate. The plate has some scattered minor erosion under the finish and light wear with well defined serrations. Overall, the stock is in Fine condition as refinished and repaired.

Overall Condition: This rifle retains about 97% of its current metal finish. The balance is mostly in light operational wear. The finish is thinning at some edges, most notable at the muzzle. There are a few scattered minor marks and infrequent spots of faint surface oxidation, mostly on the bottom metal. The screw heads are sharp. The markings are clear. Overall, this rifle is in Fine condition as restored.

Box, Paperwork & Accessories: This rifle comes with the installed scope as described. Also included is a copy of an Authentication Certificate and a copy of the day book entry from John Rigby & Co.

Our Assessment: The story of John Rigby & Co. is long, impressive, and continues to this day. Founded in Dublin, Ireland in 1775, the original John Rigby’s gunmaking business was nearly destroyed by the Irish rebellion of 1798 (one can imagine that this was the case with many if not all Irish gunmakers at the time). Rigby would rebuild his business over the next decade, but would pass away in 1818 leaving his business to his sons William and John Jason. W. & J. Rigby developed a reputation for their abilities in barrel making and rifling as well as for high grade dueling pistols. W. & J. Rigby’s tenure was an exciting time for firearms development, seeing the technology advance from flintlocks to the early metallic cartridge era.

The third John Rigby would open their London office at 72 St. James Street in 1865 and would eventually close the Dublin location. Rigby was quite an excellent shooter, winning Wimbledon Cups and even posting the best individual score in the first International Rifle Match at the Creedmoor Range in New York. He also was obviously well suited to the business of both fine rifle making as well as helping the technology of gunmaking to mature, being selected to refining both the cartridge and the mechanism of the .303 Lee Enfield rifle as the superintendent of RSAF Enfield.

As the Rigby name only gained in prestige, they secured an exclusive import contract with Mauser for their rifles and components in the Empire and Rigby would do great things with the Mauser action as they developed new cartridges. This is an excellent example of their work, a Mauser Sporting Best rifle from  1906. The rifle is chambered for the .350 Rigby No. 2 cartridge, a rimmed cartridge which can push a .358” diameter 225 grain bullet past 2,600 feet per second! The rifle has not only a nice set of Express iron sights, not only a Rigby designed retractable, bolt-mounted peep sight, but also a quick-detach Rigby-marked scope with see-through rings.

Any rifle is only as capable as the man who owns it, and this rifle’s first owner has quite the story. Born in Halifax, Nova Scotia in 1867, Arthur Grant Bremner graduated from the Royal Military College in Kingston, Canada in 1888 as a 2nd Lieutenant. He was then made a Captain in the Royal Engineers, assigned to the 3rd Sappers & Miners. He participated in the expedition to Dongola in 1896 during the Egyptian conquest of Sudan. Captain Bremner purchased this rifle from John Rigby & Co. in 1906, just two years before his promotion to Major. It’s even likely that the rifle was purchased in advance of his being stationed in Kirkee (Khadki), where it would have made a fine hunting rifle for a British officer stationed in India. While the rifle was completed in 1906, Rigby’s records indicate that it was “Regulated for No. 2 Cartridge November 1910”. When the Great War broke out, the 3rd Sappers & Miners were transferred to the Ypres sector in France, participating in the 1st and 2nd battles of Ypres in 1915. In 1917, Bremner had been temporarily promoted to Brigadier General, where he was the Chief Engineer of British XIX Corps, 5th Army during the battle of Pilckem Ridge. Bremner survived the war and passed away in 1924.

This rifle has been beautifully restored, looking gorgeous despite its age and would be a great addition to even advanced collections. Not only a Best quality Rigby rifle, it was purchased and owned by a notable Canadian member of the British Royal Engineers who served in WWI. All that said, it still has a good bore and strong mechanics, still suitable for hunting here in America or on even for your next expedition to Sudan or India. Please see our photos and good luck!