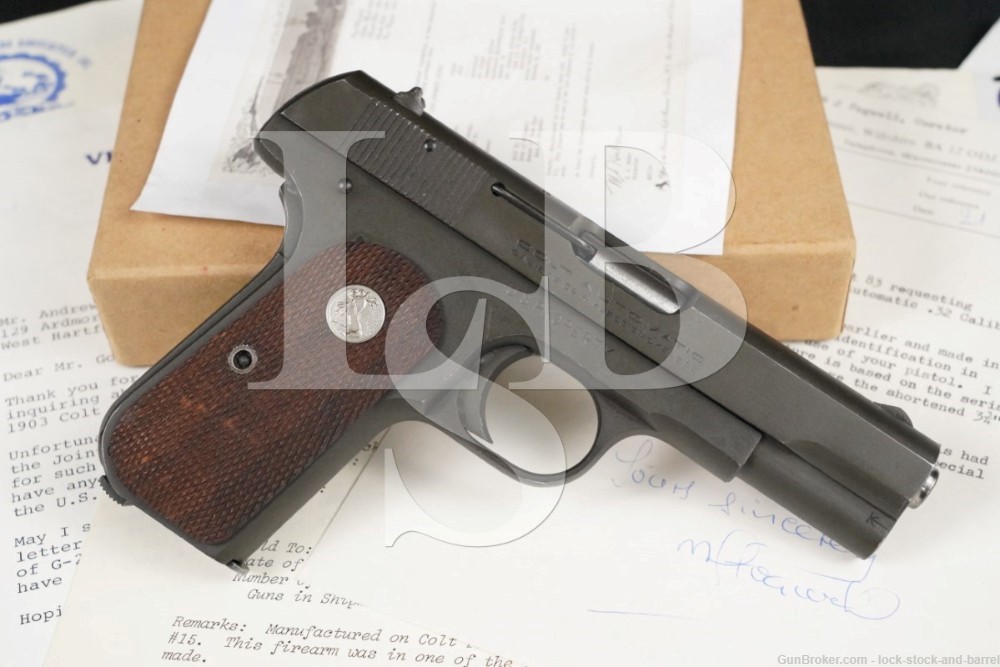 Stock Configuration and Condition: The grips are checkered walnut with silver-colored rampant colt medallions. The grips have have a few scattered small nicks, most on the right panel. Otherwise, there are only light handling marks. The checkering is generally sharp. There are no chips or cracks. Overall the grips are in Fine-plus condition.

Overall Condition: This handgun retains about 97% of its current metal finish. The finish is lightly thinning at some edges. There are a few minor nicks, scuffs and scratches with one small but more notable nick on the bottom-front of the trigger guard at the right edge and a thin, light scratch on the top of the slide between the rear sight and extractor pivot-pin. The action shows minor operational wear. The screw head is sharp. The markings are clear. Overall, this pistol rates in Fine-plus condition.

Box, Paperwork, and Accessories: This pistol comes in a (modern) two-piece cardboard craft box with wax paper, cleaning rod and a single blued 8 round magazine. The magazine has light operational wear and some minor oxidation, mostly on the floorplate, with intact feed lips and a strong spring. Also included is a Colt letter and correspondence with various museums, the Department of the Army, the NRA, Colt Collectors Association and Veterans of OSS. The Colt letter confirms that this pistol shipped February 20, 1945 to Washington Quartermaster Depot in Cameron VA for the Property Officer G2/Mis as one of 500 guns of the same type in the shipment.

Our Assessment: The Colt Model 1903 Pocket Hammerless is a semi-automatic pistol designed by John Browning, and was the 1st of the Colt concealed hammer models, followed by the M1908 in .380 ACP. Despite the title ‘Hammerless’, the M1903 and M1908 pistols do have a hammer, which is covered and hidden from view under the rear of the slide. This allowed the weapon to be carried in and withdrawn from a pocket quickly and smoothly without snagging. These pistols were popular civilian firearms for much of their life, and also served as United States General Officer pistols from the 1940s until their replacement by the M15 General Officers pistol in the 1970s. The Office of Strategic Services issued the Model 1903 to its officers during World War II and it was a popular back-up/off-duty model with police officers in the United States.

This example is quite interesting for a couple of reasons. It was purchased by the United States government and the Colt factory records indicate that it was addressed to the Military Intelligence Service. Established in 1941, MIS had two sections, one focused on Japan and the other on Germany. On both fronts, they were instrumental in deciphering intercepted communication, interrogation of prisoners, and in some cases even translating order shouted during battle or shouting conflicting orders to confuse the enemy.

This pistol is also one of the very last Model 1903s made. The Colt letter indicates that it “was in one of the last shipments of .32 caliber’s [sic] made”. Given that there were 500 pistols in the shipment and serials stopped at 572215, fewer than 200 after this pistol, it may well have been in the last shipment of .32 Automatics. This pistol also comes from the collection of author Kevin Williams, best known for his exceptional work on the topic of General Officers Pistols & Clandestine Organization Pistols of WWII. This pistol’s history and high condition will make it a great addition to any Colt or US Military sidearm collection. Please see our photos and good luck!