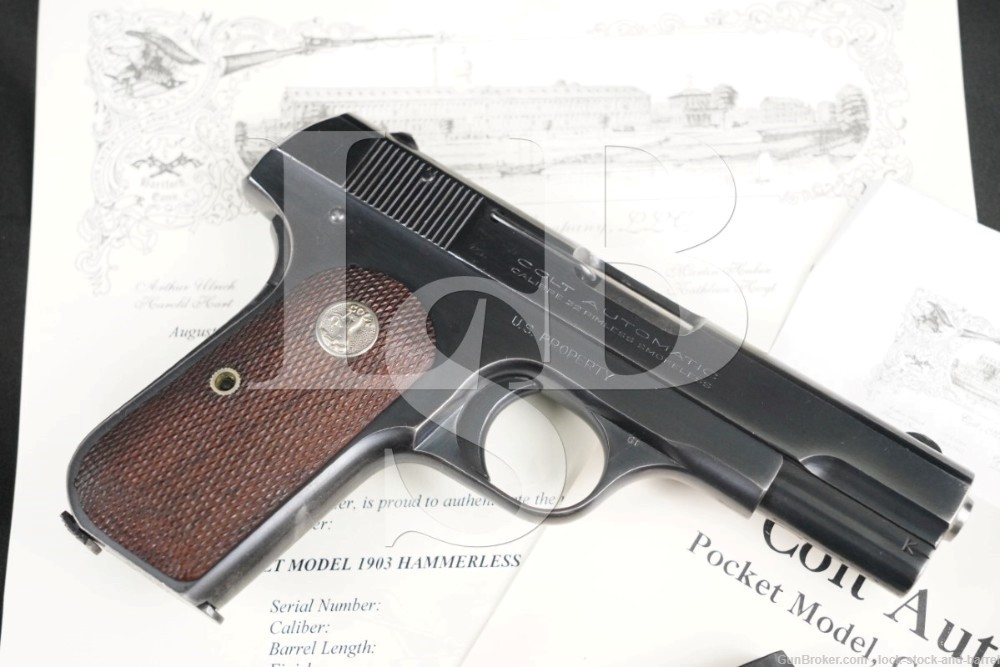 Stock Configuration and Condition: The grips are checkered walnut with silver-colored rampant colt medallions. The grips show minor handling wear with a few minor nicks. The checkering is well defined. There are no chips or cracks. Overall the grips are in Fine-Excellent condition.

Finish Originality: The frame’s finish is Original. The slide has been refinished.

Overall Condition: This handgun retains about 92% of its current metal finish. The finish is thinning at all edges. There is handling wear in the grip areas. There are some scattered light nicks and scratches, mostly in the grip straps and clustered around the thumb safety on each side of the frame. There is infrequent minor surface oxidation. There is a small notch in the top-rear of the slide, it appears to line up with the rear sight notch which would indicate that the notch was cut when the base was installed on the slide. The action shows light operational wear. The screw head is tool marked with a strong slot. The markings are clear. Overall, this pistol rates in Very Good condition as partially refinished.

Mechanics: The thumb safety is designed to be able to also lock the slide back. The slide will only be held back when the safety lever is being pressed upward manually. When released, the slide will fall. Otherwise, the action functions correctly. The slide has minor play to the frame. This pistol has a grip safety, a manual safety and a magazine disconnect. We did not fire this handgun. As with all used firearms, a thorough cleaning may be necessary to meet your maintenance standards.

Box, Paperwork, and Accessories: This pistol comes in a two-piece cardboard craft box wit, Colt Archive letter, a total of two blued 8 round magazines, cleaning rod, manual, and wax paper. One magazine has minor operational wear, intact feed lips and a strong spring, the other shows almost no wear. The letter confirms that this pistol shipped February 8, 1942 to the United States Government, factory marked “U.S. Property”. It shipped as one of 200 guns of the same type in the shipment.

This example is one that was made for a contract with the United States government, as is evident by its “U.S. PROPERTY” marking, and was a fairly early example. These earlier pistols received acceptance marks much like 1911A1 pistols and Victory revolvers, this one having the inspection mark of Waldemar Broberg. Later, pistols would receive a discreet punch-dot marking and then crossed-cannon Ordnance wheel marks. This makes for an interesting example for the collector, adding a WB marked Model M to a collection can be somewhat challenging.

Interestingly, this example has had its sights modified, though it is not clear if this was performed by an armorer while in service or after leaving service. In any case, the pistol is in Very Good condition, showing fairly light wear for a military issue sidearm and retaining a great bore and strong mechanics. This will make a nice addition to a Colt autoloader collection, especially as it comes from the collection of author Kevin Williams, best known for his exceptional work on the topic of General Officers Pistols & Clandestine Organization Pistols of WWII. Please see our photos and good luck!