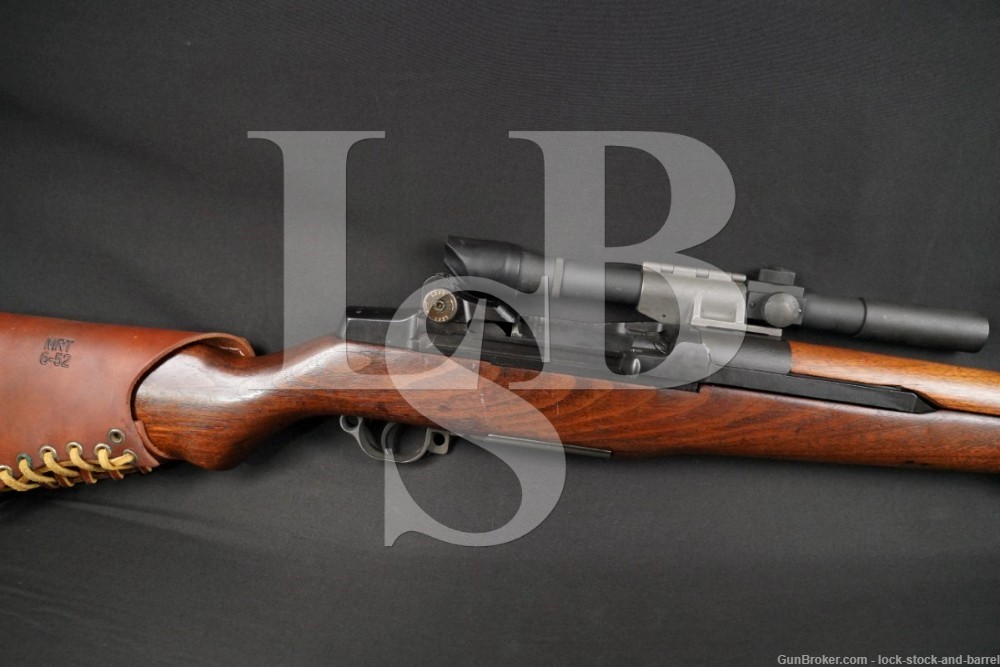 Model: M1 Garand. Converted to an M1D Sniper rifle. The conversion was NOT done by a Military Armory.

Sights / Optics: The front sight is a blade set between two protective wings. The rear sight is a fully adjustable aperture set between protective wings. The windage knob is marked “LEFT arrow” twice and “DRC”. The elevation knob is marked from “2-12” in increments of two and “HRA”.
The rifle comes with an M82 Scope assembly. The M82 was originally used on M1C Garand  Sniper Rifles with a Griffin & Howe mount. This M82 is set in an M1D mount. M1D Garand Snipers were issued with an M84 scope in an M1D mount.
The M82 scope tube markings are mostly covered by the mount; “82 / 4688” is visible. It is marked “7634671” below the top adjustment knob. The scope has been refinished. The view is mostly clear. There are small black flecks along the edges. The scope uses a tapered post reticle that is not centered. It sits slightly to the right of center. The scope assembly is in about Good to Very Good condition.

Stock Configuration & Condition: The left side of the buttstock, under the pad, is marked with a partial Springfield Armory stamp “S.A. in a box”. The face of the grip is marked with 2 “circled P” proofs.
The three piece oil finished stock has a pistol grip, metal nose caps, two sling loops, stacking loop and a metal buttplate with a hinged door for storage. The refinished buttplate has surface erosion and scratches showing through the finish. The wood shows scuffs, scrapes, and handling marks that have been oiled. The left side of the stock shows two small filled surface repairs below the receiver. The butt shows large scuffs from the cheekpiece. The LOP measures 13 inches from the front of the trigger to the back of the buttplate. The stock rates in about Very Good Plus to Fine overall condition as refurbished.

Bore Condition: The muzzle and grooves are semi bright. The rifling is deep. There is fouling in the grooves which should clean up a bit. There is some oxidation in the grooves near the muzzle. The bore shows an M.E. of 1. The throat shows a T.E. of 2.

Overall Condition: This rifle retains about 90% of its metal finish as refinished. The metal shows scrapes and small scratches. The left side of the receiver has been polished clean of its finish. The receiver and bolt show light operational wear. The markings on are well defined. Overall, this rifle rates in about Very Good Plus to Fine condition as refinished.

This Springfield Armory M1 Garand was originally produced back in 1945. It has since been converted to an M1D Sniper rifle. The conversion was not done by a Military Armory. The rifle comes with an M82 Scope set in an M1D mount. Both the rifle and scope have been refinished.
The Springfield Armory barrel is marked properly with the correct date and stampings on the top & side of the barrel. This is a good looking Garand to add to your collection.