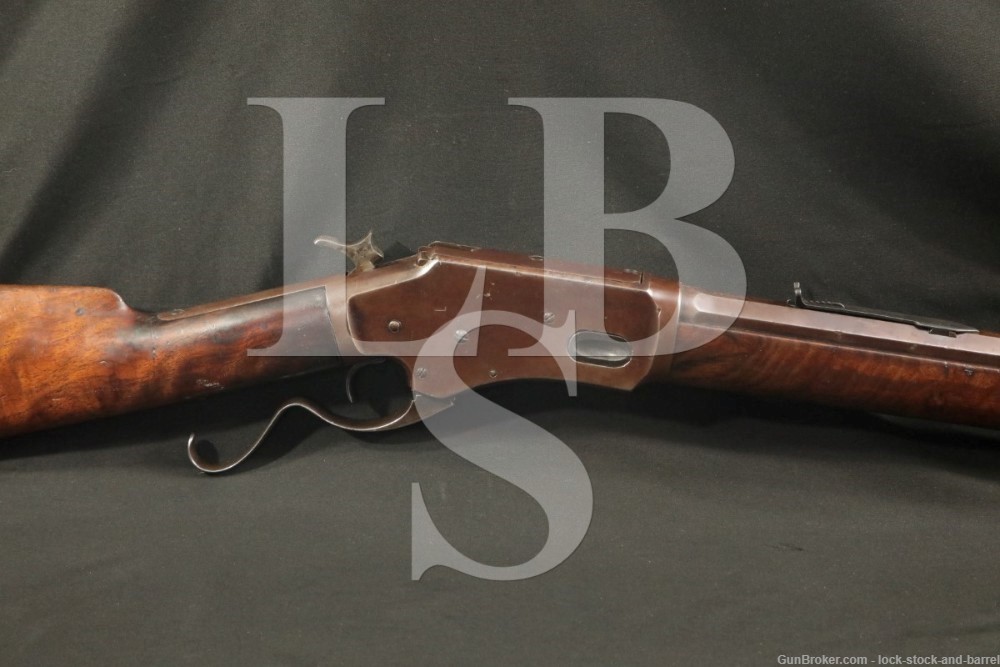 Sights/ Optics: The front sight is a brass blade fixed by the muzzle. The rear sight is a “V”-notch leaf dovetailed over an elevator.

Stock Configuration & Condition/ Grip: The stock is two-piece wood featuring a forend with a metal cap, a slot in the forend for the tubular magazine, a straight wrist, a straight comb and a metal butt-plate with a storage container. The stocks have light-moderate handling marks, nicks and scuffs. Notably, there is a small chip at the woodline on the rear left portion of the forend, a small chip at the front left portion of the top-tang, a light crack at the tip of the bottom tang, a light crack at the tip of the top-tang, scattered light nicks and scuffs on the butt and a small patch of white discoloration on the right side of the wrist and a gap between the wood and butt-plate at the toe. The LOP is 12.75” from the trigger to the rear of the butt-plate. The butt-plate is coated in light-moderate surface oxidation and has some light handling marks. Notably, the storage compartments brass cover is tarnished and coated in light surface oxidation. Overall, the stocks are in Very Good condition for Antiques.

Bore Condition: The bore is grey and has mostly sharp rifling. There is scattered light-moderate erosion concentrated in the grooves and some scattered light pitting.

Overall Condition: The rifle retains about 5% of its metal finish. The rifle is coated in oxidation and has taken a patina color. There are scattered light to moderate handling marks, nicks and scuffs on the gun’s metal surfaces. There is light wear along the leading edges,  scattered light nicks and scratches on the frame, a few scattered nicks around the front sight and some light pitting between the rear sight and receiver. Also, there is scattered light wear on the dust-cover, some light wear on the hammer and there is some light wear at the front of the tubular magazine under the muzzle. The markings remain clear. The screwheads are lightly tooled and remain serviceable. Overall, the rifle is in Very Good condition for an Antique.

This particular specimen is a Whitney Kennedy-Tiesing Lever Action Repeating Carbine. The gun is a redesigned version of the Model 1878 Burgess Repeater which was redesigned by Samual V. Kennedy and Frank W. Tiesing which was designed to chamber the .44-40 Winchester Center Fire cartridge (a popular round at the time). The gun incorporates both Andrew Burgess’ patents (who designed the Burgess Repeater) in addition to a patent held by Kennedy and a joint patent held by Kennedy and Tiesing. The gun has the serpentine or “S” shaped lever of the early production carbines made until mid-1883 (the gun was discontinued in 1886). This is a sporting variant of the iconic design and not one of the few sold to several Latin American countries for military service. The gun has wear consistent with an Antique firearm, but it remains markedly well preserved. This is a great option for fans of historical firearms. Good luck on your bid!