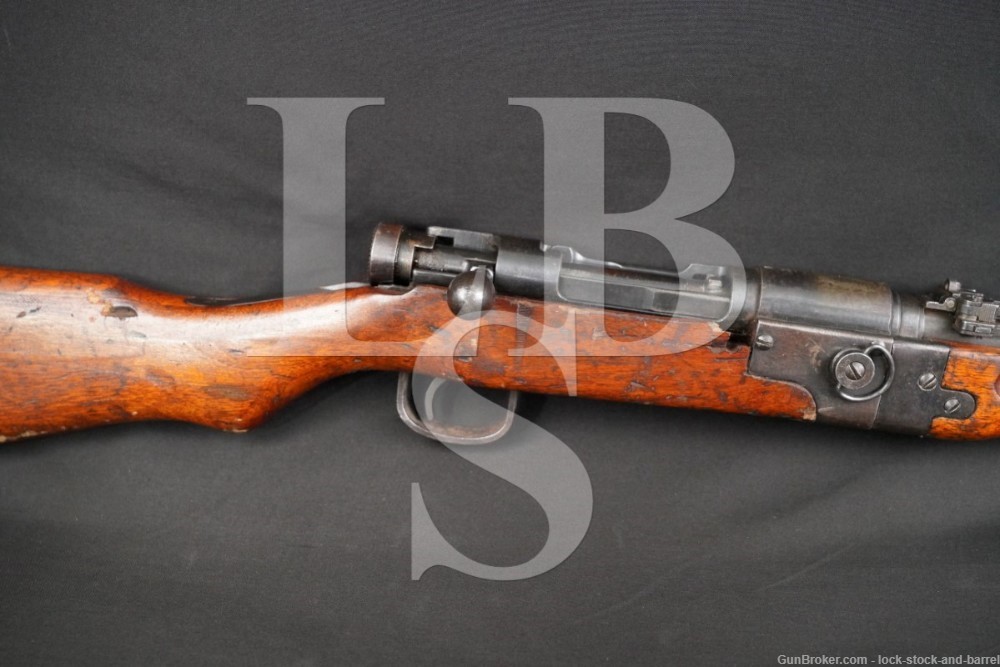 Sights / Optics: The front sight is an inverted “V” dovetailed into a banded rectangular base with protective ears. The rear sight is a ladder sight that is screwed to the barrel. The rear of the ladder has a fixed peep sight for use when the ladder is folded down. When the ladder is folded up, there is an aperture in the center of the slider for use. The sides of the ladder are marked from “3” to “15”. The slider has spring-loaded latches for raising and lowering the slider and locking it into position. The ladder has folding anti-aircraft wings attached, each marked “2” and “3”, and with a “V” notch on the outside edge (lower edge when unfolded to the horizontal position).

Stock Configuration & Condition: The three-piece stocks are smooth wood with finger grooves, a pistol grip, sling loops on the left of the buttstock and barrel band, a straight comb, and a metal buttplate. The buttstock is made from two pieces of wood, with the bottom piece starting near the bottom of the pistol grip. The lower tang wraps around the front of the bottom piece to better secure the piece. There is a drain hole in the bottom of the forearm and on the right, below the chamber. The stock shows numerous scrapes, gashes, compressions, scratches and impact marks. The most notable defects are a gash on the bottom front of the forearm and a few small cracks and chips around the right side drain hole. The LOP measures approximately 12 1/2” from the front of the trigger to the back of the metal buttplate, which shows an even patina with erosion and scrapes at the heel and toe. Overall, the stocks rate in about Fair-Good condition.

Bore Condition: The bore is bright and the rifling is deep. There is no erosion in the bore.

Overall Condition: This rifle retains about 75% of its metal finish. The balance of the finish shows surface oxidation which is most notable on the bottom metal. There are scattered little nicks and scratches. There is standard operational wear. The top front of the receiver shows finish loss around where the mum was defaced. The connecting metal has turned to a patina. The screw heads range from tool marked to slightly disfigured with serviceable slots. The markings are clear. Overall, this rifle rates in about Good-Very Good condition.

Our Assessment: During World War II, Japan did not use paratrooper forces as extensively as other powers and development of the related equipment was also slow. The experiences of airborne attacks in Sumatra and other places may have provided the impetus to develop a rifle specifically for use by paratroopers. The precursors to the Type 2 were the Type 100 and Type 1 paratrooper rifles. The TERA Type 2 was designed in 1942 using these designs as a basis as to how to collapse the gun. Production of the Type 2 was carried out by the Nagoya Arsenal, with the rifle produced between 1943 and 1945; the Type 2 remains the only paratroop rifle used by the Japanese which was produced in any significant quantity and used by Japanese paratroopers. Production ended in 1945 with the end of the war with some 21,200 produced (although some sources say 19,000). Some rifles were taken home by the Allies as war prizes and were sometimes used as film props. This rifle is in about Good-Very Good condition with a bright bore and intact AA sights. The rifle is taken down easily as designed and will make a great addition to a WWII or Japanese small arms collection. Please see our photos and good luck!