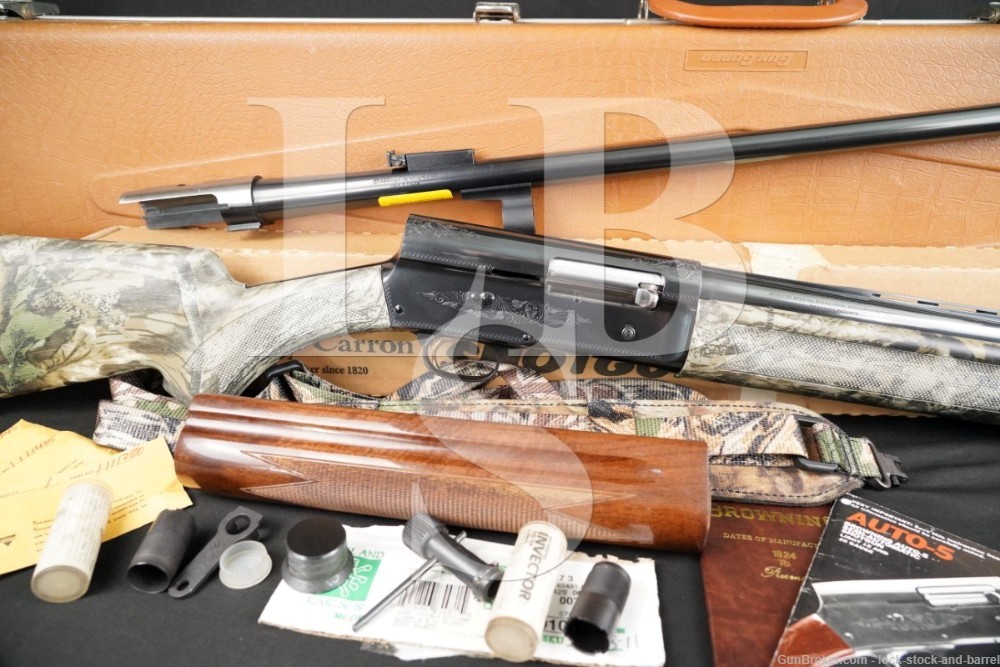 Markings: The left side of the barrel is marked “BROWNING ARMS COMPANY MORGAN, UTAH & MONTREAL P.Q. / MADE IN JAPAN”. The right side of the barrel is marked “BROWNING AUTO-5 / INVECTOR SPECIAL STEEL 12 GA. SHELLS-2 3/4″-26″ / BROWNING PATENTS”. The left side of the receiver is marked “Light Twelve / ® / BROWNING” with a bust portrait of John M. Browning, the underside has the serial number. The receiver has tasteful Grade I engraving. There is a Browning Buck-Mark logo on the bottom of the trigger guard filled with gold paint.

Choke: The installed barrel is threaded for Invector chokes with Full installed, Modified and Improved Cylinder are included.

Sights / Optics: There is a bead which has been painted orange at the front of the rib. The top of the rib has checkering and the top of the receiver has serrations for glare reduction. The Hastings barrel has a brass beaded blade dovetailed to a serrated, ramped base fixed to the front of the barrel. The rear sight is a “U”-notch adjustable for windage and elevation in a base fixed to the rear of the barrel.

Stock Configuration & Condition: The stocks are two-piece Bell & Carlson camouflage pattern checkered synthetic stocks with finger-grooved forend, straight comb, black rubber B&C buttpad and sling studs front and rear. The stocks have a few scattered light nicks and scuffs, most going unnoticed due to the camo pattern. There is one more notable nick in the front of the grip. The checkering is well defined. There are no chips or cracks. The LOP measures 14 1/4″ from the front of the trigger to the back of the pad. The pad has a little bit of stubborn brown residue, otherwise showing some minor scuffing and remaining quite supple. Overall, the stocks are in Fine condition as not original to the gun.

A Browning checkered walnut forend is also included. The forend has some light nicks, scuffs and scratches but no notable damage. There are no chips or cracks. The checkering is well defined. Overall, the wood forend is in Very Good-Fine condition.

Overall Condition: This shotgun retains about 97% of its metal finish. There are a few minor scratches on the left of the receiver, a scuff to the left of the sighting plane on the top-rear of the receiver and a small but deep nick in the top tang at the front. Otherwise, there are only light handling marks. The screw heads are generally sharp, the bottom tang screw is tool marked with a strong slot (and a replacement screw is included). The markings are clear. Overall, this shotgun is in Fine-Excellent condition.

-Walnut forend as described above

Browning would eventually license the design to FN in Europe and later to Remington for their Model 11 and to Savage Arms for their Models 720 and 755. These designs went on to be a great commercial success, the first truly successful autoloading shotgun. This Auto-5 was built in Japan by Miroku in 1987, after production was moved there from FN. It is a Light Twelve chambered for 12 GA. 2 ¾” shells with Grade 1 engraving and has a 26″ vent-rib barrel threaded for Invector chokes with Full, Modified and Improved Cylinder tubes included, making for quite the versatile hunting gun. Adding to its versatility is the included 24″ rifled slug barrel from Hastings which will make this gun suitable for hunting terrestrial game as well. The gun appears to have been well cared for, in Fine-Excellent condition with more signs of handling and storage than actual firing, though it has been equipped with camo synthetic Bell & Carlson stocks as well as coming with a padded sling, all set for your next hunting season. Please see our photos and good luck!