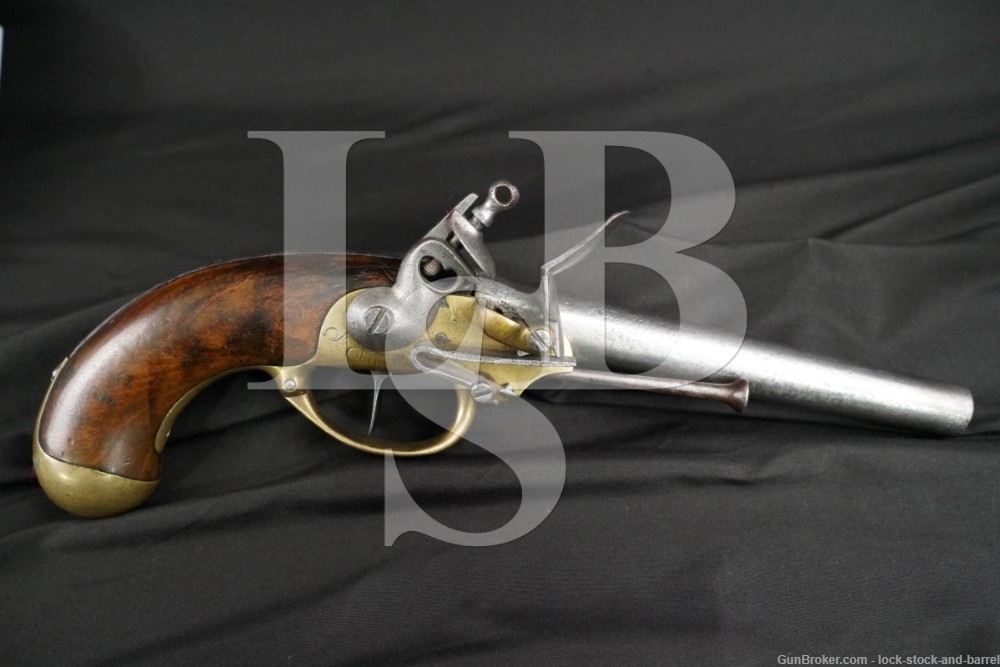 Stock Configuration & Condition/ Grip: The pistol features a provision in its frame for the included ramrod and has a wood grip with a metal back-strap in addition to a brass cap. The grip has some light handling marks, nicks and scuffs. Notably, there is a small hole on the upper left portion of the grip, adjacent to the back-strap. Overall, the grip is in Very Good condition for an Antique.

Bore Condition: The bore is dark with scattered moderate-heavy erosion throughout.

Overall Condition: The pistol retains about 20% of its metal finish. The brass parts are mostly tarnished, have scattered patches of light surface oxidation in addition to some light verdigris in the recesses and the grip-cap.  The bright parts are coated in scattered patches of light pitting, light surface oxidation and some light handling wear. Notably, the muzzle has some light handling wear. The screwheads have light-moderate tooling, but they remain serviceable. Many of the markings appear to have faded, but some are still clear. Overall. The pistol is in Very Good condition for an Antique.

Box Paperwork and Accessories: There is a ramrod included with the pistol.

Our Assessment: The French Model 1777 was a handgun that entered service in 1779. The Model 1777 replaced the Model 1763/66 and was manufactured at Charleville, Maubeuge and Saint-Etienne arsenals  until 1792 when it was phased out. The gun was well received by French soldiers when it first entered service, but there were complaints about its utility in the field. Aside from seeing use in the French military, thousands of Model 1777 pistols were supplied to the American Revolutionaries by France during the American War of Independence. Remarkably, the stalwart handgun was still in service among French forces fighting at Waterloo in 1814 (more information on the gun is available here).

This pistol was manufactured at Saint-Etienne and remains well preserved for a pistol made well over 200 years ago. A number of the gun’s markings have worn off, thus establishing certain specifics about the gun is difficult (the date code and unit markings). Despite this, the gun is nicely preserved, retaining both its unique aesthetic and remaining mechanically sound. This is a great option for historical firearms collectors. Good luck on your bid!