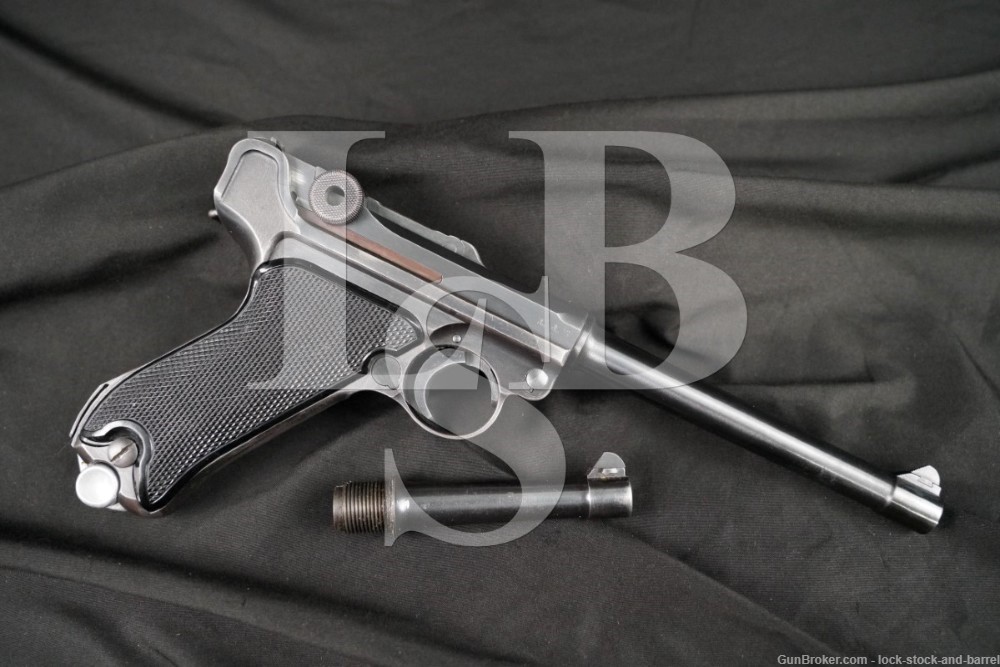 Bore Condition: On the installed barrel the bore is mostly bright with sharp rifling. There are a few trace spots of stubborn fouling in the bore.

The original 4” barrel’s bore is  grey and has mostly sharp rifling. There is light-moderate erosion concentrated in the grooves.

Overall Condition: The refinished pistol retains about 80% of its metal finish. There are some light handling marks, nicks and scuffs. Notably, the finish has worn off the leading edges of the frame and action, but the barrel is still nicely preserved. Also, the finish has largely worn off the grip straps. The markings remain clear. The screwheads are only lightly tooled and remain serviceable. Overall, the pistol is in Very Good condition.

Box Paperwork and Accessories: There is a single magazine included with the handgun which is not serial matched. The bottom of the magazine is marked “9977 / u / +” above a NSDAP-style waffenamt above “63”. Also, a standard 4” original P.08 barrel is included with tha handgun (it is currently not installed). The barrel is marked “2231 / 8,81” on the bottom and features an eagle clutching a swastika on the right side. There is finish loss on the barrel, concentrated on the left  side. The original bore is non-functioning per the cosigner and is in poor condition overall.

This particular specimen, despite having an aftermarket barrel installed, comes with its original 4” barrel and all the components are serial matched with the exception of the magazine and grips (the grips may be original but we can not confirm this). Mauser used the code “byf” on its output beginning in early 1941 and continued to use that code until the end of WWII, which aligns with the waffenamts and date code on the slide. This particular Luger was manufactured in 1941 two years into the Second World War. It would prove to be the most decisive year of the conflict, on June 22nd, 1941 a German led coalition invaded the Soviet Union and initially made massive inroads into Soviet territory. The Red Army took massive losses in the early months of the invasion, millions of Soviet soldiers were taken prisoner (where they would be starved to death by their captors) and the German military appeared poised to capture Moscow by the end of the year. What Hitler and his High Command had not foreseen was a massive Soviet counteroffensive. On  December 5th, under the leadership of General Giorgy Konstantinovich Zhukov, Red Army units which had been stationed in the Far-Eastern portions of the Soviet Union were transferred to Moscow and launched a masterful counterstroke which repulsed the German advance and secured the imperiled capital of the Soviet Union. Also, following the Japanese attack on Pearl Harbor, Germany declared war on the United States which only further complicated Germany’s position. Despite some light handling wear the gun remains aesthetically pleasing and it is both an ergonomic and mechanically sound option. If you are a fan of German military arms and WWII history then this is the handgun for you. Good luck on your bid!