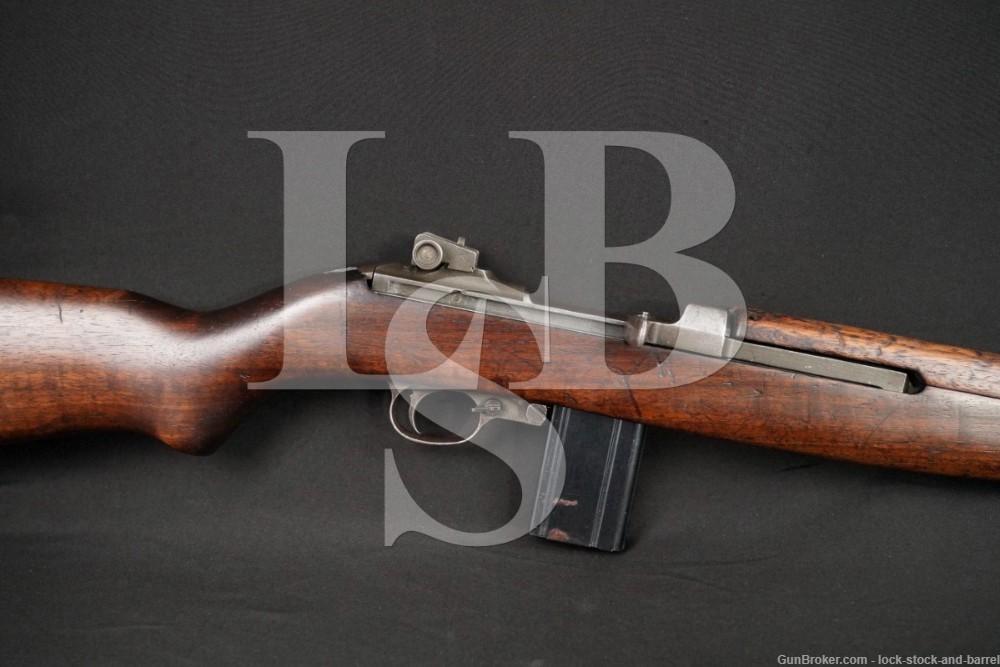 Stock Configuration & Condition: The wood stock has a pistol grip, Type III barrel band with sling loop & bayonet lug, sling well, sling pass through, and a metal buttplate. The  buttplate has been refinsihed. The barrel band shows thinning and surface erosion. The wood shows numerous scrapes, scratches and compression marks. The wood has been oiled. The LOP measures 13 1/4 inches from the front of the trigger to the back of the buttplate. The stock rates in about Very Good overall condition.

Bore Condition: The lands are bright. The muzzle and grooves are semi bright. The rifling is deep. There is fouling and light erosion at the muzzle and in the grooves. The fouling should clean up a bit. The bore shows an M.E. of 1.3.

Overall Condition: This rifle retains about 60% of its metal finish. The metal shows scrapes, scratches, discoloration from oxidation and a few areas of light surface erosion. The sides of the trigger group and receiver show thinning under the wood. The exposed portion of the barrel shows surface erosion and thinning. The right front of the operating slide shows an area of surface erosion and thinning. The receiver and bolt show operational wear. Most of the markings are deep. Overall, this rifle rates in about Good to Very Good condition.

Mechanics: The trigger housing retaining pin is broken in half. Only half of the pin remains. It holds the trigger group in place.
The action functions correctly. We did not fire this rifle. As with all used firearms, a thorough cleaning may be necessary to meet your maintenance requirements.

Box, Paperwork & Accessories: The magazine has some dried grease residue on it. It shows several small scrapes. It is in Very Good Plus to Fine condition.
The 15 round magazine is not available to residents of California or any other state with magazine capacity restrictions.

This Winchester M1 Carbine was made back in 1943. At some point it was rebuilt by the Underwood Elliott Fisher Company and is marked accordingly on the stock. It was rebuilt using a mix of USGI parts but still retains its original Winchester marked barrel. The rifle has seen some use but has deep markings, nice wood and a very good bore. It will add to your collection and should be fun at the range. Good luck.