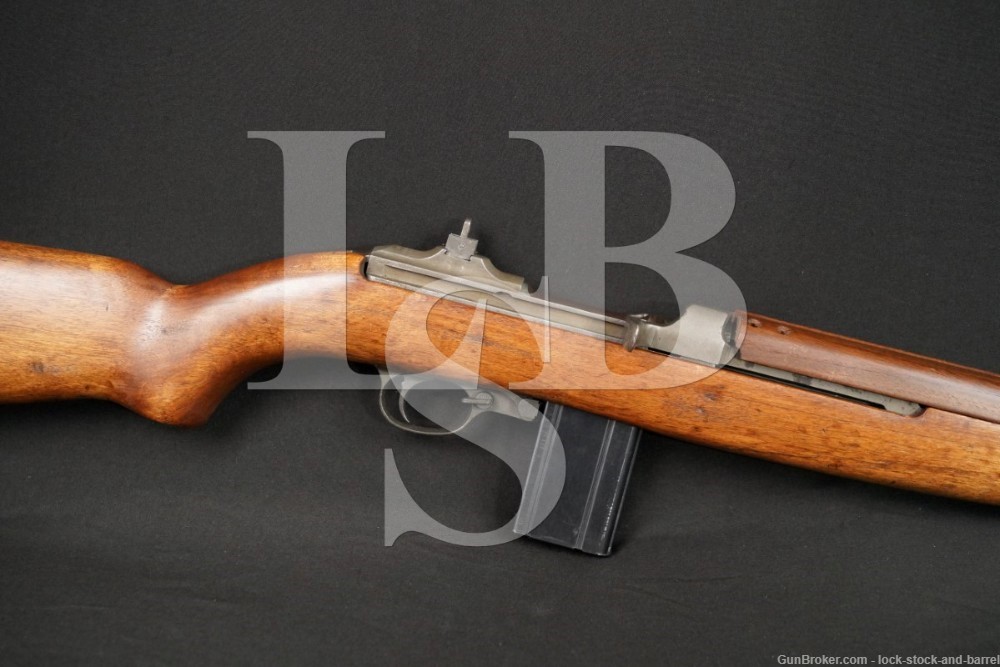 Sights / Optics: The front sight is a post set between two protective wings. The rear sight is a Type I dual flip up aperture. The rear aperture is broken.

Stock Configuration & Condition: The two piece hardwood stock has a pistol grip, Type III barrel band with sling loop & bayonet lug, sling well, sling pass through, and a metal buttplate. The buttplate shows surface erosion. The wood shows scrapes, scratches, and compression marks which have been finished over. The stock shows repairs on the nose, the grip and the forearm. The forearm and grip each have large cracks that are still visible. The right side of the butt shows sanding marks. The LOP measures 13 1/4 inches from the front of the trigger to the back of the buttplate. The stock rates in about Good overall condition as refurbished.

Bore Condition: The muzzle and grooves are semi bright. The rifling is sharp. There is erosion at the muzzle and a small amount of erosion in the grooves near the muzzle. The bore shows an M.E. of 0.5.

Overall Condition: This rifle retains about 85% of its metal finish. The metal shows scrapes, small scratches and thinning on the leading edges of the metal. The receiver shows areas of discoloration from oxidation below the wood. The op rod shows surface erosion. The markings are well defined. Overall, this rifle rates in about Good to Very Good condition.

Mechanics: The slide lock and slide lock spring are missing. One of the rear sight apertures is broken.
The action functions otherwise. We did not fire this rifle. As with all used firearms, a thorough cleaning may be necessary to meet your maintenance requirements.

Box, Paperwork & Accessories: The rifle comes with a 15 round magazine. It shows light scrapes and light handling marks. It is in Very Good Plus to Fine condition.
The 15 round magazine is not available to residents of California or any other state with magazine capacity restrictions.

Our Assessment: The M1 Carbine was developed and produced after WWII started. Over 6 million were made by a number of U.S. companies to assist with the all out war effort. The M1 Carbine was widely issued to U.S. Military Forces which numbered over 16 million during WWII. The M1 Carbine contributed greatly to U.S. efforts during WWII.
National Postal Meter (NPM) was one of several contractors who tooled up during WWII to produce M1 Carbines in support of the war effort. NPM rushed into the war effort as did other companies with no firearms background. At the time of their first contract NPM had no tools, no employees, and no location for building carbines. National Postal Meter’s test fire range was built by raising the floor of the carbine manufacturing plant three feet above the building’s concrete floor and literally shooting under the feet of the production line. Despite these issues NPM was able to produce about 6.8% of the total number of WWII M1 Carbines.

This National Postal Meter M1 Carbine was built back in 1943. It has been rebuilt using a mix of USGI parts but still retains some NPM parts. The metal was refinished during the rebuild and the stock has since been repaired. This is a good looking M1 Carbine that should be a lot of fun to take out the range. Good luck.