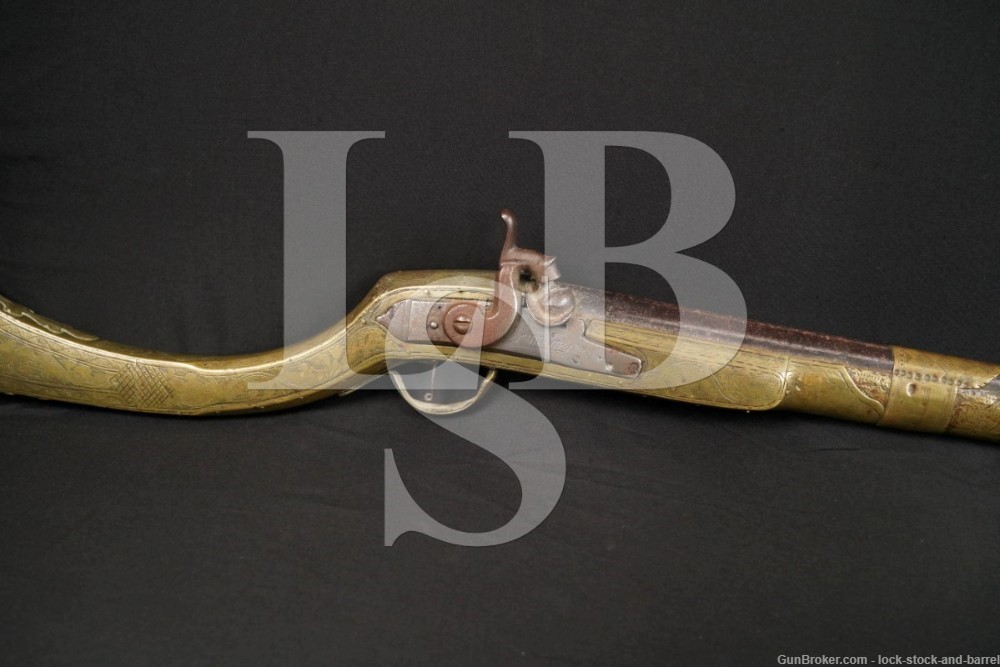 Markings: There are floral scroll engravings on the stock and the lock-plate is marked with a faded marking.

Sights/ Optics: There is provision for a bead at the muzzle but it is filled with the remnant of a front sight that has broken off.

Stock Configuration & Condition/ Grip: The brass stock features a forend provision for a ramrod (no ramrod is included), three brass barrel bands, a slot for a forend wedge (no wedge is included or installed), a lock-plate,a curved wrist, a curved comb and a semi-crescent butt-plate. The stock has some light handling marks, nicks and scuffs. Notably, the stock has scattered light-moderate patches of tarnish, scattered light surface oxidation and scattered patches of light verdigris concentrated in the gaps. There is a crack in the ramrod’s provision. The LOP is 11.75” from the trigger to the rear end of the butt-plate. The butt-plate is lightly tarnished, has a small patch of tarnish at the bottom and some light handling marks. Overall, the stock is in Very Good condition.

Bore Condition: The bore is dark with scattered light erosion.

Overall Condition: The gun retains about 30% of its metal finish. The barrel and lock are coated in light-moderate patches of surface oxidation and have taken a patina color from oxidation. There are some light handling marks, nicks and scuffs. Notably, there is light wear along the leading edges including around the muzzle. Some of the markings have faded, but most remain clear. The screwheads are lightly tooled, but they remain serviceable. Overall, the musket remains in Good condition for an Antique.

Mechanics: The nipple is deformed, but otherwise the action functions correctly. We have not fired this musket. As with all used firearms, a thorough cleaning may be necessary to meet your maintenance requirements.

Our Assessment: The Jezzail is a term used to describe a style of musket primarily used in South Asia and the Middle East, and they were primarily manufactured from the 17th-19th century. These muskets were typically made by hand and had varying features. The Jezzail featured prominently in the two Anglo-Afghan Wars fought during the 19th century, they were the main armament of the Afghan tribesmen who battled against the British led forces that invaded the country. In these regions the aged muskets remain family heirlooms today.

This particular specimen was originally manufactured with the flint-lock ignition system but it has been converted to the percussion ignition system, as evidenced by tool marks surrounding the breech. We were not able to conclusively determine where this particular specimen originated, but its construction is consistent with a Jezzail. This is a great option for fans of historical firearms. Good luck on your bid!