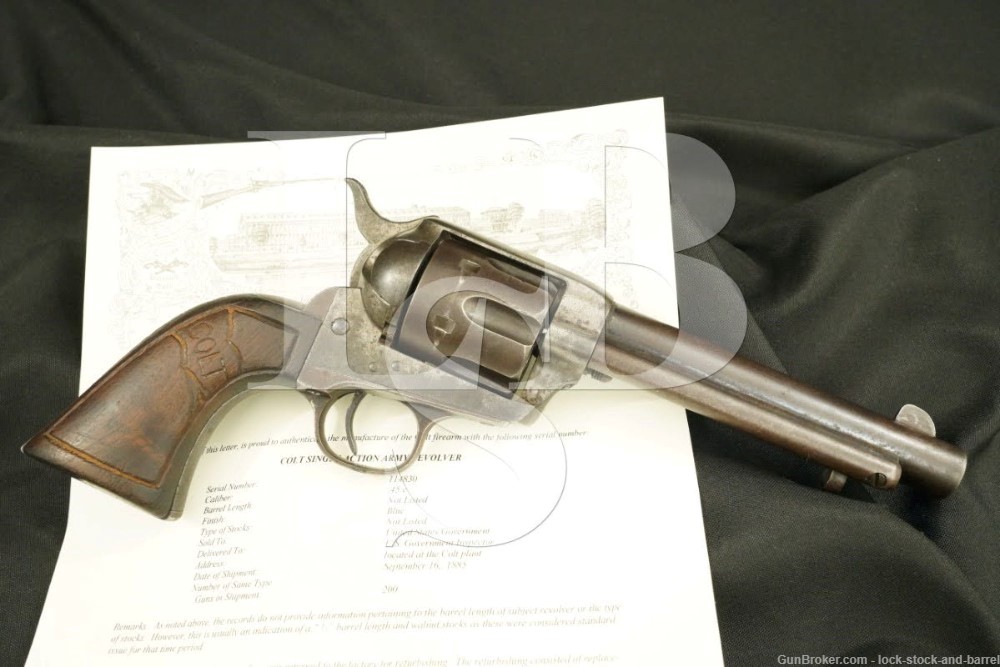 Barrel Length: The barrel has been cut to 5 ½”.

Sights / Optics: This revolver is mounted with a “V” notch in the top strap for a rear sight and a quarter round blade front sight fixed to the barrel.

Stock Configuration & Condition: The grip is one piece walnut. Each side has custom hand-carving around the borders and a banner across the top, the right’s banner has had “COLT” hand-carved. The right also has a faded “1903” inspection cartouche. The bottom has “RAC” cartouches to each side of the backstrap. There are some scattered light nicks, scuffs and scratches with four more notable notches at the bottom edge on the left which appear to have been intentionally applied. There are no chips or cracks. Overall, the grips are in Very Good condition as customized.

Finish Originality: The included Colt letter indicates that the revolver was returned to the factory in 1903 for refurbishing. This refurbishment frequently involved installation of non-serial matching parts and this is likely the reason for the non-matching parts on this revolver. We don’t see any signs that the revolver was refinished since this refurbishment.

Bore Condition: The bore is semi-bright with well defined rifling. There is some scattered light erosion and infrequent pitting in the bore, most notable toward the muzzle-end.

Overall Condition: This revolver retains about 15% of its current metal finish. Most remaining finish is in protected areas such as around and under the ejector housing, at the rear of the barrel where it enters the frame, the corners formed by the trigger guard where it widens to meet the frame, the rear face of the cylinder and at the top of the backstrap behind the base of the hammer. The frame shows scattered remaining case color, also mostly in protected areas such as the face of the recoil shield, the loading groove, and the pinched area at the front under the cylinder pin. Other areas of the frame are fairly evenly mixed between areas which have muted, almost looking like old nickel plate, and areas gone to a light-moderate patina. Most of the exposed areas which were blued have gone to a moderate patina with some grip areas worn to white. There are some scattered light nicks, scuffs and scratches with infrequent spots of minor surface erosion. The cylinder has a turn-line and a few more notable nicks around the outside. The rear face of the cylinder has a ring of wear between the chambers at the location of the firing pin, but the firing pin is intact. The grip screws range from sharp to disfigured with useable slots. The bottom backstrap screw appears to be a more modern replacement. The markings range from clear to worn and incomplete. The revolver is in Fair-Good condition as Antique (see Mechanics).

Mechanics: After the first click (the safety notch), the trigger moves forward excessively in the trigger guard and the trigger can be pulled back, causing the hammer to come back until the sear slips out of the notch and the hammer falls. The trigger can also be pulled to drop the hammer from half-cock, though this takes excessive force. The hammer has four clicks, but the third is very close behind the half-cock notch, requiring the user to be careful when engaging half-cock if you wish to be able to turn the cylinder (such as for loading/unloading). After the fourth click, the hammer falls forward to the half-cock notch and the trigger pull is crisp, but still quite heavy. We have not fired this revolver. As with all used firearms, a thorough cleaning may be necessary to meet your maintenance standards.

Box, Paperwork & Accessories: This revolver comes with a Colt Historian letter which states that this revolver’s frame, serial 114830, was originally assembled as an 1873 Cavalry model and shipped to the United States Government on September 16, 1885 in a shipment of 200 guns of the same type. The letter further confirms that the revolver was returned to the Colt factory for refurbishing, consisting of replacement of worn parts, exterior refinishing and reassembly, with the majority of revolvers refinished at the time having their barrels shortened to 5 1/2″. This revolver was shipped to Springfield Armory after refurbishment on August 21, 1903 in a shipment of 317 guns.

Our Assessment: This revolver started out life in 1885 as a Cavalry Model SAA revolver with 7 ½” barrel made for the U.S. Army. In their book “Colt Cavalry and Artillery Revolvers”, Kopec and Fenn indicate that between 1900 and 1903, Colt altered and refinished 5,444 revolvers into “Artillery” models (5 ½” barrel). Per Kopec and Fenn, “A single Artillery revolver often will have parts from three or four different Cavalry revolvers”. The “Artillery” moniker is a collector’s term, as the modified revolvers were most notable for their issue to U.S. Artillery units in the Spanish-American war, however the later 1900-1903 altered revolvers saw mixed serial numbered parts.

The included Colt Historian letter indicates that this is one of those 5,444 revolvers converted by Colt into an Artillery model for use in the Philippines, though it was delivered too late for the Philippine-American War. The revolver looks like it’s in pretty good shape, given its age and use, though there is a mechanical issue in the lockwork that should addressed if you wish to actually shoot this revolver. This revolver’s frame probably saw service during the Indian Wars and later again in the Philippines after being converted to an Artillery model (though not during the Philippine-American war, perhaps in the Moro Rebellion).

This revolver must have a very interesting history, if only it could be told. All of the Colt 1st Generation revolvers are heavily collected, and this Artillery Model will not be an exception. Please see our photos and good luck!