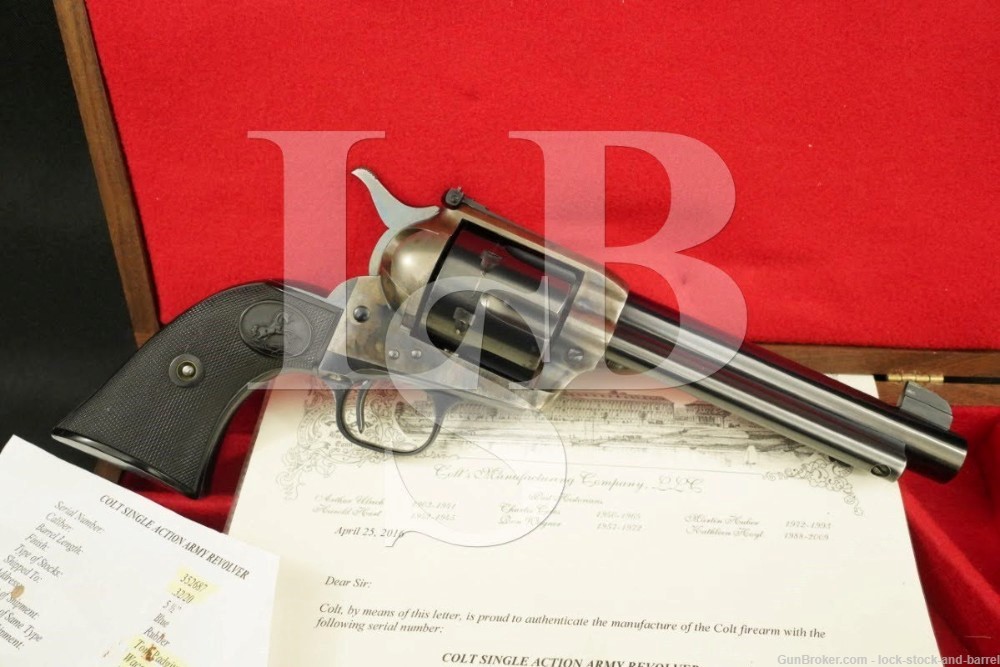 Caliber: This revolver has been converted to .38 Special.

Sights / Optics: The front sight is an after-market stepped blade fixed to the front of the barrel. The top strap has been cut for a square-notch sight, adjustable for windage and elevation, screwed to the topstrap.

Stock Configuration & Condition: The grips are two-piece checkered black hard rubber with rampant colts in ovals at their tops. The grips have minor handling wear with a few light nicks and scratches, mostly at the bottom edges and one more notable nick in the front edge of the right panel. The checkering is well defined and there is good detail in the rampant colts. There are no chips or cracks. Overall, the grips are in about Fine condition.

Finish Originality: Apart from the hammer, the finish appears Original to the parts. The barrel and cylinder are not original to the frame. The hammer was refinished, likely at the time it was modified. The interior of the frontstrap has been modified for the after-market mainspring.

Overall Condition: This revolver retains about 92% of its metal finish. The finish is thinning at most edges. The barrel has some minor nicks and scuffs at the muzzle on the left and a few light marks on the bottom which appear to be from removal/installation of the cylinder pin. The frame has some scattered muting and discoloration, but generally has strong color and good figuring. The cylinder shows light turn wear with spots of more notable wear at the point of each lead-in groove. The cylinder has some scattered minor marks with a small patch of minor oxidation between two of the flutes near the front. The grip frame has light handling wear, minor nicks and scuffs, and infrequent minor surface oxidation. The screw heads range from sharp to lightly tool marked with strong slots. The markings are clear. Overall, this revolver is in Very Good-Fine condition as customized.

Mechanics: The action functions correctly. The mainspring has been replaced with a John Newman “buggy” spring, intended to reduce hammer bounce and decrease lock-time. The trigger is light and crisp. The cylinder locks up with minor play on each chamber and has a removable bushing. We did not fire this revolver. As with all used firearms, a thorough cleaning may be necessary to meet your maintenance standards.

Box, Paperwork & Accessories: This revolver comes in a wood presentation case and with a Colt Historian letter. The letter confirms that this revolver originally shipped May 16, 1929 to Tom Padgitt Company in Waco, Texas as a 5 1/2″ .32-20. The letter goes on to state that the revolver was returned to Colt’s June 3, 1929, shipped April 14, 1930 to Odell Hardware Company in Greensboro, North Carolina, and returned again April 24, 1930 to Colt’s. Their records do not indicate what happened to the revolver after being returned this second time. The display case has a red fabric-lined English-fit interior with two accessory compartments, showing minor storage and handling wear.

Our Assessment: Colt’s Single Action Army revolver is the iconic sidearm of the cowboy, lawman, and outlaw. It served the United States Army from 1873 until the Great War and, much like its successor the 1911, it was both a revolution at the time it was adopted, but also a mainstay of American handguns for generations in law enforcement, criminal, and law abiding citizens’ hands. Also like the 1911, the Single Action Army has seen decades of  tweaks, modification, customization and after market parts to fit various purposes.

This example of a later 1st Generation SAA appears to have had a very interesting history. Its first stop after leaving the Colt factory would be Tom Padgitt Company in Waco, Texas. Padgitt learned the saddlery trade in Houston and started his own company in Bryan, TX, moving along as the Houston & Central Texas Railway was constructed before settling in Waco. There, he would see his business flourish into one of the largest saddlery suppliers in the country, even supplying the French, British and, of course, America during the Great War. Padgitts may still be fondly remembered in central TX fondly today for Tom’s son, Clint, who was a great supporter of his Alma Maters, Waco High School and Baylor University.

The gun would not stay there long, being returned to the factory less than a month after arriving in Texas. It would be shipped nearly a year later to Odell Hardware Company, a large wholesaler and retailer in Greensboro, North Carolina. Its stay in the Tar Heel state would be even more brief, spending a total of 10 days outside the factory. It could be speculated that the gun was intended as a sample, being sent to different dealers for display or as examples of Colt’s revolver.

That’s where the documented history of the revolver ends, but there’s more story in the revolver itself. It has been equipped with custom target sights as well as a new mainspring designed by John Newman. The hammer has had its profile adjusted, with the spur coming back at a slightly lower angle and protruding further to the rear than a factory Colt hammer. Rounding out the customization, the barrel and cylinder have been replaced for use with .38 Special cartridges, a common conversion in the post-War era when the cartridge far outstripped .32-20 in popularity and availability.

This is a fascinating 1st Generation SAA which comes with a nice display case for those looking to add to their collection. It is also a revolver clearly customized for target shooting and should still be a great shoter. In any case, this is a unique and interesting gun which is perfect for any collection. Please see our photos and good luck!