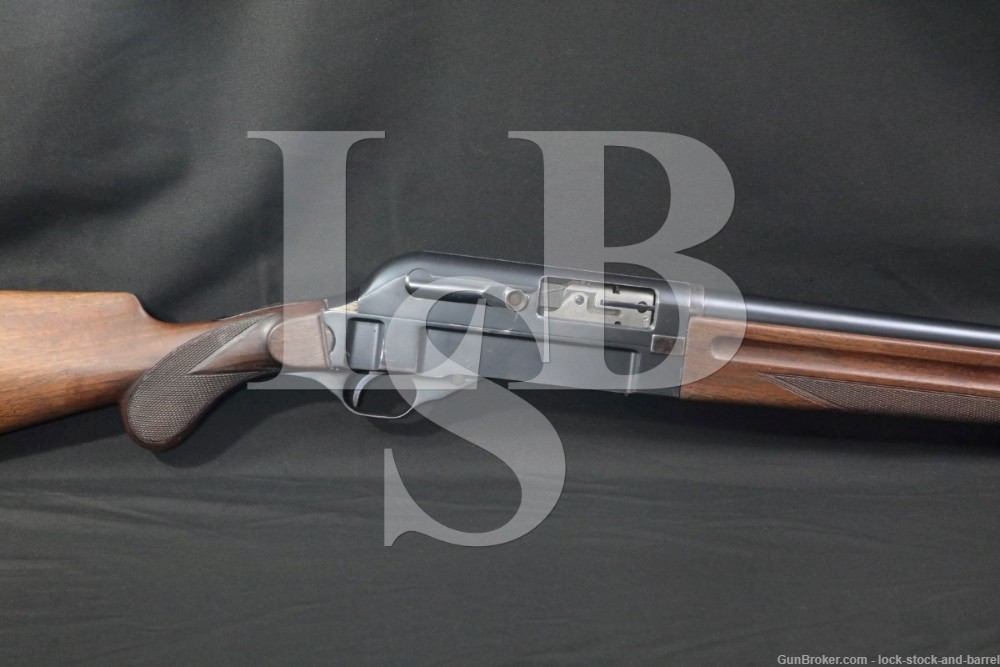 Sights / Optics: There is a silver-colored bead on a checkered, ramped base fixed to the front of the barrel. The top of the receiver has a sighting plane which is checkered for glare reduction.

Stock Configuration & Condition: The stocks are a two-piece checkered walnut set with a round-bottom pistol grip, and finger grooves running the length of the forend. The buttplate is missing. There is an empty hole in the belly which may have been from a previous sling stud or an initial plate. There is a sling swivel on the forend cap. The stocks have some scattered light nicks, scuffs and scratches. The forend has a repaired chip-loss at the left-rear which has been pinned back in place and there are a couple over other very small losses at the left-rear edge. There are cracks at the bottom-front, the right-rear and on the bottom-rear at the right side of the forend. The front of the wrist has a crack at the rear of the top tang (common on this model due to the mechanism, see Our Assessment). The LOP measures 12 5/8? from the front of the trigger to the back of the butt. The mounting bolt is tight, but the buttstock does have some play front-to-rear between the receiver and mounting bolt. The guard’s mounting screw is missing. Overall, the stocks are in Fair-Good condition.

Bore Condition: The bore is mostly bright. There is no erosion in the bore, but there is some stubborn fouling in the choked portion.

Overall Condition: This shotgun retains about 92% of its metal finish. The finish is thinning at all edges. Most of the balance is in operational wear seen on the barrel at the magazine bracket, the right of the receiver from the charging handle and the top-rear of the receiver on each side from the upper housing moving back and forth. There is a patch of grinding on the rear of the trigger guard. There is some scuffing at the muzzle on the left and some other scattered minor nicks, scuffs and scratches. The controls show handling wear. There are infrequent spots of minor surface oxidation. The bolt is cut for a dust cover, but the dust cover is missing. The markings are clear. Overall, this shotgun is in about Good condition.

Mechanics: The action functions correctly. The magazine release is on the left of the receiver, allowing the forend/magazine assembly to pivot down for loading. The charging handle is on the right of the receiver, pulled down to cycle the action manually (the charging handle is non-reciprocating). The bolt release is a button on the bottom of the receiver behind the magazine assembly. There is a cross-bar safety at the front of the trigger guard. We have not fired this shotgun. As with all used firearms, a thorough cleaning may be necessary to meet your maintenance standards.

Our Assessment: Walther is know for many things in the firearms world, but shotguns really are not one of them. This is an example of one of their rare forays into shotguns, a semi-automatic shotgun with a toggle-locked short-recoil operating system. These guns are not particularly common, with approximately 5,000 made in total, and here in the states it can be a little difficult to find one. The operating mechanism lends itself to stout recoil, even from 2 1/2? shells, and this accounts for the crack in the wrist which are common to the model. This example appears to have seen some use over the last 90-100 years, but still retains a great bore, strong mechanics and much of its original finish, though the buttplate and guard mounting screw are missing. The stocks have some wear and damage, but if you’re looking for one of these models this can easily be overlooked. This is a rare find for the Walther collector, but is also a very interesting mechanical design as well as being a great example of the innovation and variety found in early autoloading shotguns. It will make a great addition to any collection. Please see our photos and good luck!