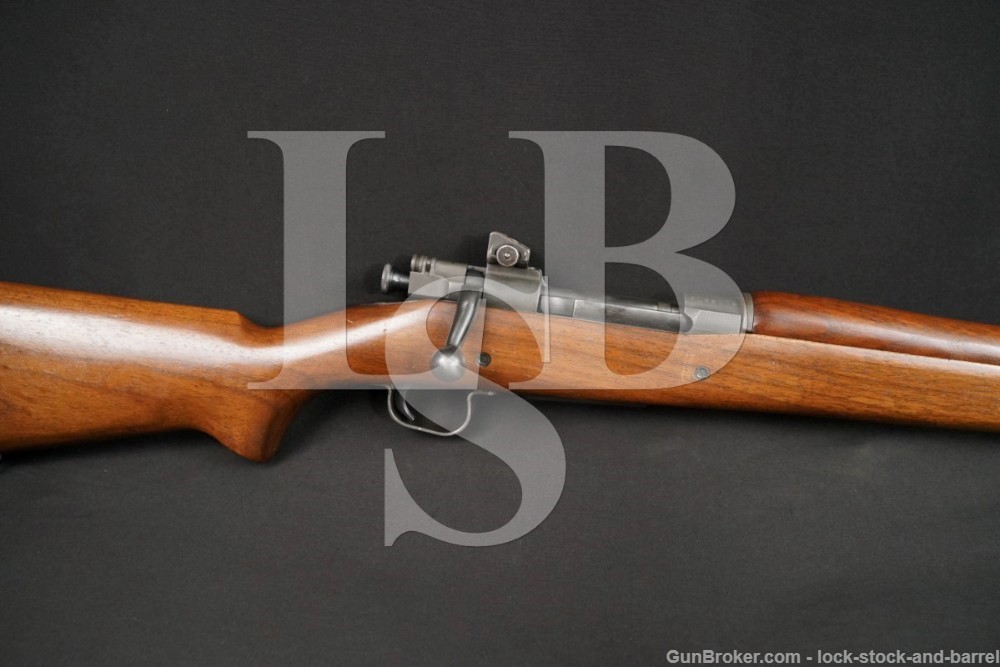 Year of Manufacture: 1943 (page 375 of Joe Poyer’s book, The Model 1903 Springfield Rifle and its Variations, 3rd Edition).
No Barrel Date

Stock Configuration & Condition: The new production hardwood stock was made and marked by the Civilian Marksmanship Program (CMP). It has a pistol grip, metal nose cap with bayonet lug, stacking loop, 2 barrel bands, 2 sling loops, 2 through bolts, and a metal buttplate with hinged door for storage. The buttplate shows scrapes. The wood shows scrapes, scratches and compression marks. The most prominent marks are next to the front though bolt; both sides. The LOP measures 12 7/8 inches from the front of the trigger to the back of the buttplate. The stock rates in about Very Good Plus overall condition.

Bore Condition: The bore is bright. The grooves near the muzzle are semi bright due to fouling. The fouling should clean up some. The rifling is deep. There is no erosion. The bore shows an M.E. of -0.2 (negative 0.2).

Overall Condition: This rifle retains about 96% of its metal finish. The metal shows scattered scuffs, light scrapes, and small scratches. There are more prominent marks on the trigger guard and front sight. The receiver and bolt show operational wear. The screw heads show moderate use. The markings are deep. Overall, this rifle rates in about Very Good Plus condition.

Mechanics: THE RIFLE WILL FIRE WHEN THE SAFETY LEVER IS MOVED FROM THE “FIRE” POSITION TO THE “SAFE” POSITION. Do not load or fire this rifle until this DANGEROUS issue is remedied by a gunsmith.
The action functions otherwise. We did not fire this rifle. As with all used firearms, a thorough cleaning may be necessary to meet your maintenance requirements.

This Remington Model 1903-A3 has been rebuilt by the Civilian Marksmanship Program (CMP). The receiver, bolt and many small metal parts are USGI parts. The barrel and stock are new production items that were added by the CMP. The rifle has deep Remington markings on the receiver and little “R” stamps on some of the metal parts.This is a good looking rifle with a strong & bright bore. It will add to your collection.
Unfortunately the safety has an issue. THE RIFLE WILL FIRE WHEN THE SAFETY LEVER IS MOVED FROM THE “FIRE” POSITION TO THE “SAFE” POSITION. Do not load or fire this rifle until this DANGEROUS issue is remedied by a gunsmith.