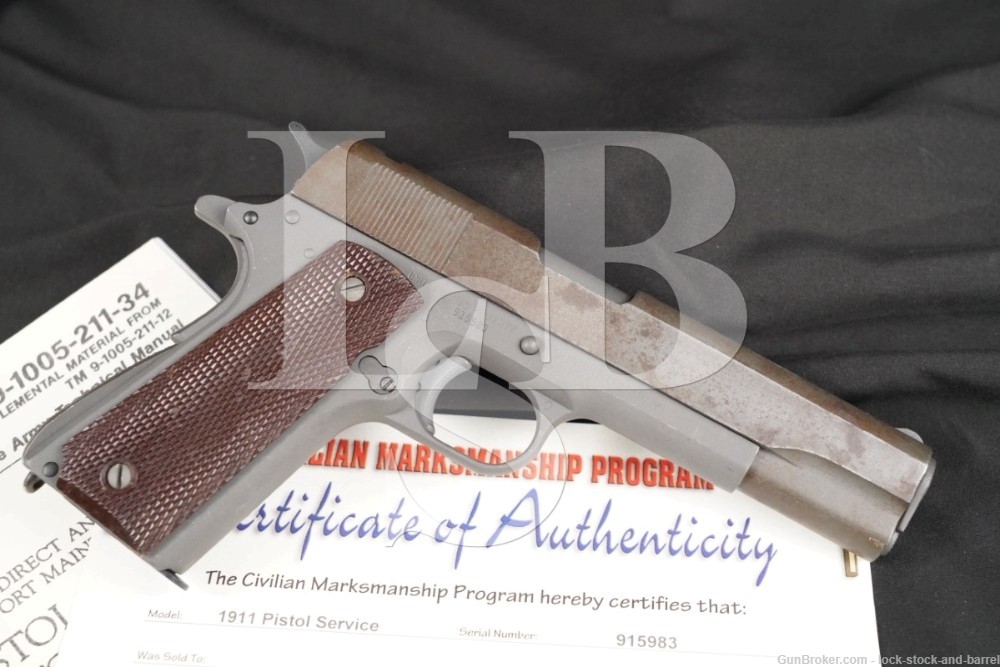 Serial Number: 915983 (This serial number falls into a range which was used by both Colt and Ithaca. Based on the lack of a Verified Proof on the trigger guard as well as lacking the usual inspection mark at the disconnector found on Colt pistols, we believe the frame was produced by Ithaca).

Markings: The left side of the slide is marked “ITHACA GUN CO., INC. / ITHACA, N.Y.”. The left of the frame behind the magazine release and the top of the slide in front of the rear sight are marked with a “P” acceptance proof. The left side of the frame above the magazine release is marked “FJA” (Frank J. Atwood Lt. Col., Sub-Inspector for Ithaca, Remington Rand and Union Switch). The right side of the frame is marked “UNITED STATES PROPERTY / No 915983”, “M 1911 A1 U.S. ARMY”, flaming bomb, “RIA”, “FK” and at the rear there is a faint, incomplete Ordnance mark. The interior of the dust cover has a flaming bomb Ordnance mark. The left link-lug of the barrel is marked “P”, the right “HS”. The right front bow of the trigger guard is marked “0”, the left has an Ithaca inspection mark. There is a flaming bomb under the firing pin plate.

Sights / Optics: The front sight is a short blade with a ramped rear face fixed to the slide. The rear sight is missing, but there is a dovetail at the rear of the slide.

Bore Condition: The bore is mostly bright with sharp rifling. There is some minor erosion in the bore.

Overall Condition: This pistol retains about 70% of its metal finish. The frame has a generally strong gray parkerized finish. There are nicks in the frontstrap under the finish, some scattered minor scuffs and scratches which mostly don’t go through the finish and minor operational and handling wear. The slide’s finish is mostly muted or gone to a light patina with scattered spots of more notable oxidation. The slide has some scattered light nicks and scratches. The action shows light operational wear. The screw heads are tool marked with strong slots. The markings range from clear to shallow, but legible. Overall, the pistol is in Good-Very Good condition.

Mechanics: The action functions correctly. There is light play between the slide and frame. The trigger is crisp. This pistol has manual and grip safeties. We have not fired this pistol. As with all used firearms, a thorough cleaning may be necessary to meet your maintenance standards.

Box, Paperwork & Accessories: This pistol comes with a serial-matched CMP Certificate of Authenticity, Army Technical Manual and a single 7-round magazine. The magazine has minor operational wear with intact feed lips and a strong spring. The certificate has had the original purchaser’s name obscured with whiteout.

During the inter-war years, the design was further refined with an arched mainspring housing, relief-cuts behind the shortened trigger and some minor changes to other small parts, resulting in the 1911A1. This new model would be the US sidearm during WWII, and saw production by a few different companies. As in the previous World War, Colt and American Arsenals were not able to produce everything that would be required for this war, and production would be contracted to a typewriter company, Remington Rand, a company which made switches and signals for railroads, Union Switch & Signal, and one firearms manufacturer, Ithaca Gun Co. This example was made by Ithaca in 1943, and is one of the earlier guns produced by the Ithaca, New York based company.

It stayed in US inventory for some time, eventually being sold to the public by the Civilian Marksmanship Program in December of 2018 as a Service Grade. Based on the difference in condition between the slide and frame, it is likely that this pistol left the CMP with a non-Ithaca slide (the mixture of parts from various manufacturers was quite common) and the slide was added later to make the pistol more “correct”. The RIA and FK markings on the frame indicate that it was refurbished at the Rock Island Arsenal between 1943 and 1946, when assistant foreman Frank Krack left. Based on the gray parkerizing of the frame, we believe that the pistol was refurbished at least once more, though there are no additional markings to tell us where. The pistol is in Good-Very Good condition, and with its good bore and strong mechanics, would be well worth restoring to a correct Ithaca 1911A1. This would be a nice addition to a collection, especially for those who missed out on the CMP’s release of these pistols. Please see our photos and good luck!