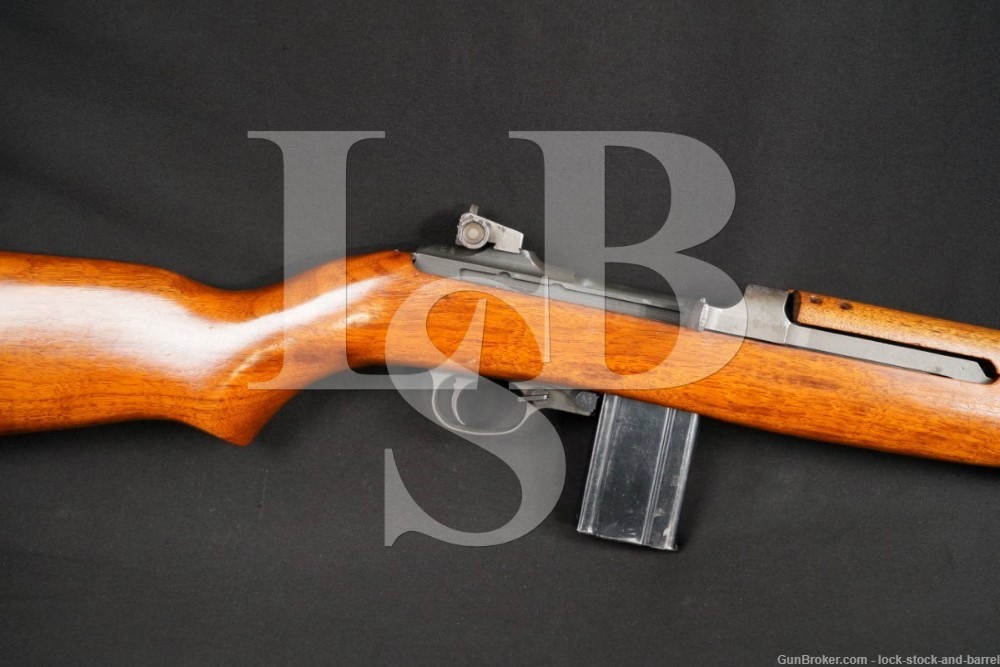 Stock Configuration & Condition: The stock has a pistol grip, Type III barrel band with bayonet lug & sling loop, sling well, sling pass through, and a metal buttplate. The refinished buttplate has dents and light surface erosion showing through the nes finish. It also shows scrapes & small scratches. The wood shows various scrapes & scratches. The edge of the oiler cutout is missing small chips of wood.  These marks have been finished over. The LOP measures 13 1/4 inches from the front of the trigger to the back of the buttplate. The stock rates in about Very Good Plus to Fine overall condition as refinished.

Overall Condition: This rifle retains about 90% of its metal finish as refinished. The metal shows scuffs, light scrapes, and light handling marks. The trigger group and receiver have surface erosion showing through the new finish. The left side of the receiver shows scrapes under the wood. The trigger guard has surface erosion bleeding through the new finish causing discoloration. The top rear of the operating slide and the rear sight show surface erosion. The receiver and bolt show light operational wear. The markings are deep. Overall, this rifle rates in about Very Good Plus condition as refinished.

Box, Paperwork & Accessories: The rifle comes with a 15 round magazine. It shows scrapes, thin scratches and a shallow dent. It is in Very Good condition.
The 15 round magazine is not available to residents of California or any other state with magazine capacity restrictions.

This Inland Division M1 Carbine was made back in 1945. It has since been rebuilt using a mix of USGI parts but still retains an “INLAND MFD. DIV. / GENERAL MOTORS” marked barrel. The rifle has been refinished since the rebuild but it still has deep markings on the metal. The rear sight has some cosmetic issues but can be replaced without too much trouble. Good luck.