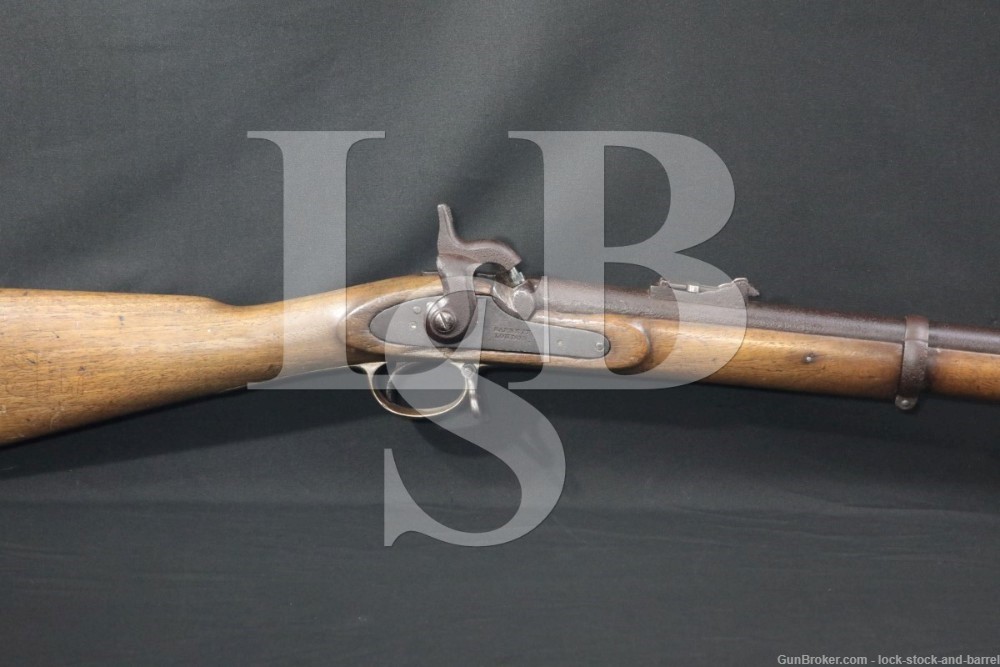 Markings: The lock is marked “BARNETT / LONDON” and the hammer is marked with a checkered shield shaped notch. The concealed portion of the lock features the serial number “343” and several faded markings. The upper left portion of the breech is marked with London commercial proof marks (the original military markings were destroyed during refurbishment). The bottom of the breech, visible when the gun is taken down, is marked with several inspection and proof marks including the serial number “343”. The front of the trigger guard is marked “343”. The left side of the butt is marked with a faded stamp with the surviving letters “F RLR”. The right side is marked “JTB”. There is a British Broad Arrow under the butt-plate.

Sights/ Optics: The front sight is a blade fixed by the muzzle. The rear sight is a ladder which presents a “V’-notch in the down position and when raised presents a fixed “V” at the top and a “V”-notch slider. The ladder is marked 5-8, inclusive. The slider appears to be an aftermarket replacement.

Stock Configuration & Condition/ Grip: The refinished wood stock features a brass nose-cap, a total of three barrel bands (the front barrel band has a sling swivel fixed to the bottom), a lock-plate secured by two screws, a straight wrist, a straight comb and brass butt-plate. The stock has a moderate crack situated where the front barrel band rests on the left side, a moderate crack on the left side of the forend between the barrel bands and there is a ding situated between the top tang and lock-plate. The LOP is 14” from the trigger to the rear end of the butt-plate. The butt-plate is tarnished and coated in light-moderate handling marks. Overall, the refinished stock is in Very Good condition.

Bore Condition: The bore is dark, the rifling is no longer visible and the bore is coated in moderate-heavy erosion.

Overall Condition: The musket retains about 30% of its metal finish. The gun is coated in light-moderate surface oxidation and has taken a dark patina color. There is scattered pitting on the metal parts which is concentrated around the breech. The brass parts are lightly tarnished and coated in light-moderate handling wear. There are scattered light handling marks, nicks and scuffs. Notably, the tip of the hammer is light worn on the left side and there is light wear along the leading edges. Also, the nipple is a modern replacement. Some markings have been lost when the stock was refinished but otherwise most of the stamps remain intact. The front barrel band has excessive play on the stock even when tightened. The screwhead on the center barrel band is no longer serviceable and the barrel band has moderate play, but the rest of the screws have only light tool-marks and they remain in serviceable condition. Overall, the musket is in Very Good condition for an Antique.

Our Assessment: Following the establishment of the Confederacy in 1861 the newly established bloc knew that conflict was inevitable with the United States which it had just seceded from. Both Confederate Central Government officials and several individual states sent agents to Europe in order to secure arms contracts. They would find their greatest success in Great Britain where several arms manufacturers agreed to supply the Confederacy with arms, although it should be noted that the United States also secured similar agreements with British firms once hostilities erupted. These British firms had no actual stake in the outcome of the American Civil War and were largely disinterested in the politics surrounding the conflict, they were just happy to secure lucrative contracts. There were several notable firms which supplied the South including John Edward Barnett & Sons of London. The British arms were superior to many of the aged weapons (including a distressing number of obsolete flint-lock ignition muskets) stored in Southern arsenals and the Confederates were far more reliant on the imported arms, the British guns were chambered for the modern Minie ball and were equipped with the modern percussion ignition system. British arms would be pressed into service in almost every major engagement of the Civil War.

This particular specimen is a Enfield Pattern 1853, Type III which was exported from Britain by John Edward Barnett & Sons of London during the Civil War. While the gun has wear consistent with an arm from the mid-19th century there are several features which indicate it was likely acquired by the Confederacy. British arms that were exported to the warring parties during the Civil War had all of their British military markings removed by the exporters. This gun is no exception, it has had commercial proofs applied over the chamber, the lock’s original markings were removed (which would have included Queen Victoria’s royal cypher, the original manufacturer of the component  and the date it was assembled; marks which were placed on all British martial arms) and the stock’s original cartouches removed. While this gun does have a surviving Broad Arrow under the butt-plate (indicating this was indeed an Enfield Pattern 1853 which had been used by the British Army), this was likely just overlooked by the exporter as they refinished the rifle. The Confederate contracts were time sensitive and the British exporters rushed to supply them with the arms they were contractually obligated to provide. Unfortunately, the stock has been refinished in recent years and during the process most of the stock’s markings were worn out, with only some faded stamps which appear to have been applied by a soldier during the Civil War. Interestingly, the hammer appears to have come from a US martial arm, featuring a distinct shield shaped notch, and was likely installed during a field repair in the midst of the conflict.

This specimen is a beautifully preserved Civil War-era relic and appears to be one of the extremely rare Confederate specimens to have survived the war. Although the slider on the rear sight and nipple are replacements, otherwise the gun appears to be in its configuration from when it was in service.  While this arm is a bit worn, it still has a functional action and retains its distinct charm. This is a great option for fans of historical firearms. Good luck on your bid!