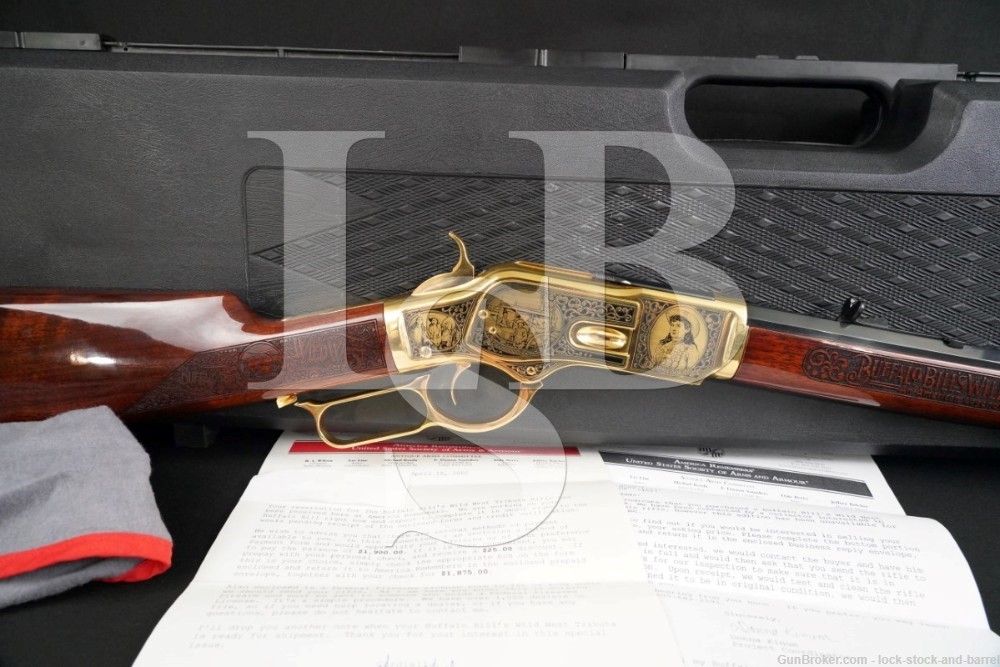 Make: Uberti built the rifle and A&A Engraving in Rapid City, S.D. did the engraving. The rifle was authorized by America Remembers.

Barrel Length: The octagon barrel is 24 ¼” in length.

Stock Configuration & Condition: The stocks are two-piece smooth hardwood with a reddish-brown satin finish. The buttstock has a straight grip, straight comb, and a gold plated crescent buttplate and the forend is held with a gold plated nosecap. The most noticeable mark is a ding into the wood on the belly of the buttstock. There are some scattered little compressions, some of the most noticeable are on the bottom of the forend at the rear and on the belly. There are scattered light handling marks. The LOP measures 12 3/4” from the front of the trigger to the back of the buttplate. The buttplate shows swirls from polishing but no wear marks. The stocks rate in about Fine condition.

Bore Condition: The bore is bright and the ring is sharp. There is no erosion in the bore.

Overall Condition: This rifle retains about 97% of its metal finish. There is some wear on the top of the front sight. The rear sight is bent forwards slightly. There are some scattered light handling marks. The hammer has some light wear on it. The screw heads are sharp and the markings are crisp. Overall, this rifle rates in about Fine Plus condition.

Mechanics: The action functions correctly. The hammer has a half cock position and a lever safety, which is a little stiff. We did not fire this rifle. As with all used firearms, a thorough cleaning may be necessary to meet your maintenance requirements.

Box, Paperwork & Accessories: Included is a hard case with a case cover,

Our Assessment: This is a Bufflao Bills Wild West Tribute Rifle that was built by Uberti and engraved by A&A Engraving of South Dakota for America Remembers. The rifle started out as a Model 1837 Sporting rifle with a 24 ¼” barrel chambered in .44-40 Win. The original finishes on the barrel, magazine tube, bolt, and dust cover were retained but the screws, the receiver, lever, nose cap, magazine tube cap, buttplate and even the magazine tube cap were gold plated. The receiver is engraved with pictures of Annie Oakley, Buffalo Bill, Chief Sitting Bull, and John Nelson. This is a beautiful rifle, so PLEASE see out pictures. The rifle is in about Fine Plus Condition with about 97% of its finish remaining and this is only due to some of the wear on the stocks. There were only 300 of these rifles made, and this one is number 083. This tribute rifle is a great way to honor America’s most famous marksmen, and should be a welcome addition to any collection. Seeing as how it appears to have seen little use and they only made 300, this would be a nice addition to a lever action collection. Please see our photos and good luck!