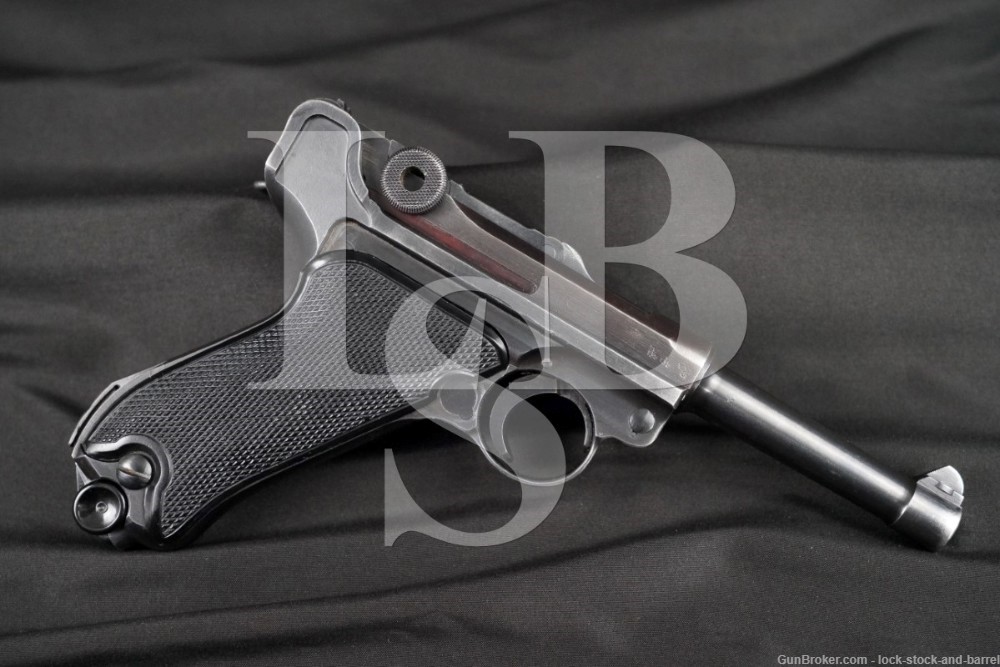 Stock Configuration & Condition/ Grip: The grip panels are two-piece checkered black synthetic. The grip panels have light handling marks, nicks and scuffs. The checkering remains mostly sharp and there are no chips or cracks. Overall, the grips are in Very Good condition.

Bore Condition: The bore is semi-bright with mostly sharp rifling. There is some light-moderate erosion concentrated in the grooves and scattered light pitting.

Overall Condition: The pistol retains about 75% of its metal finish. There are scattered light-moderate handling marks, nicks and scuffs on the gun’s metal surfaces. Notably, there is finish loss along the leading edges and some light wear around the muzzle. The markings remain clear. The screw-heads are unmarred and serviceable. Overall, the pistol is in Very Good condition.

Box Paperwork and Accessories: The pistol comes with a single magazine which has some light handling marks.  Overall, the magazine is in Very Good condition.

This particular Luger was manufactured in 1942 three years into the Second World War and it would prove to be one of the most brutal years of the entire war. Following the Wehrmacht’s failure to seize Moscow in the Winter of 1941-1942, the Germans planned to strike a decisive blow against the Soviet Union by seizing the oil fields in the Caucasus and the critical logistical hub of Stalingrad on the Volga (modern day Volgograd). The fighting in the Caucasus proved indecisive and the entire German Sixth Army was destroyed at Stalingrad in what amounted to the bloodiest battle in recorded history. Aside from the defeat in the Soviet Union, the German Afrika Korps under Erwin Rommel was also defeated by the British at the Second Battle of El Alamein. By early 1943 Germany’s position had become increasingly grim but there were still two more years of bloodletting left. Mauser used the code “byf” on its output from early 1941 until the end of the conflict. Despite some handling wear the gun remains aesthetically pleasing and it is both an ergonomic and mechanically sound option. Some of the gun’s parts are force matched (the breechblock, trigger side-plate, receiver axle) and the serial number on the left side of the frame is stamped awkwardly, this was likely either the result of war-time refurbishment or the work of an importer. If you are a fan of German military arms and WWII history then this is the handgun for you. Good luck on your bid!