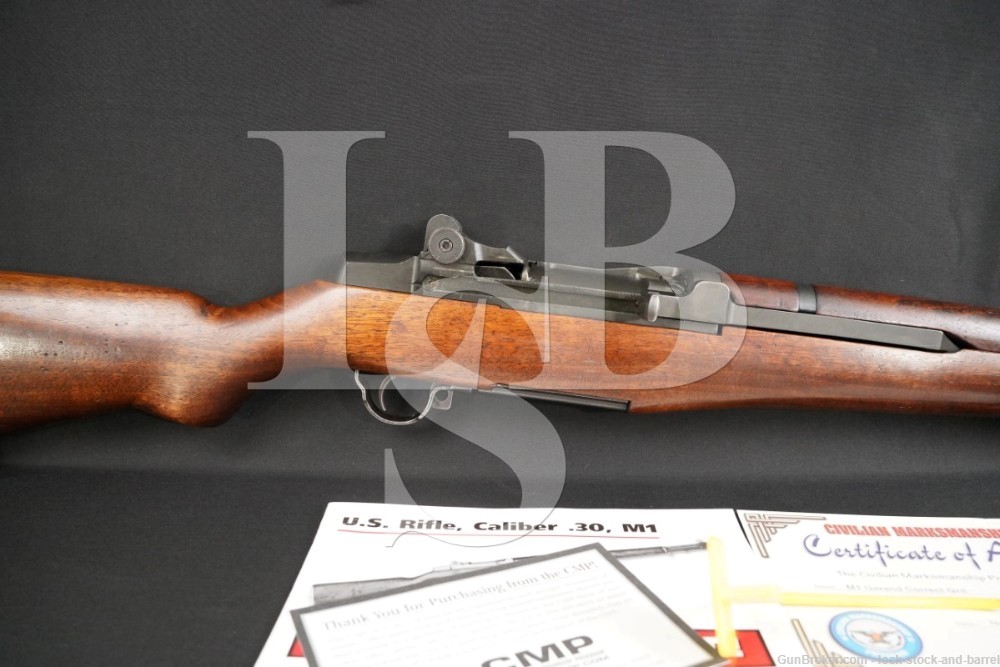 Stock Configuration & Condition: The face of the grip is marked with a “circled P” proof. The left side of the stock is marked with a Defense “Eagle” acceptance stamp which is correct for a post September, 1953 stock.
The hardwood stock has a pistol grip, metal nosecaps, stacking loop, two sling loops, and a metal buttplate with hinged metal door for storage in the buttstock. The right side of the butt shows several small shallow holes. The wood shows several scrapes, scratches & compression marks. Many have damaged small areas of the surface wood. The LOP measures 13 inches from the front of the trigger to the back of the buttplate. The stock rates in about Very Good overall condition.

Bore Condition: The lands are bright, the grooves are semi bright and the rifling is deep. There is some fouling in the grooves which should clean up a bit. There is no erosion. The bore shows an M.E. of 1.5. The throat shows a T.E. of 3.

Overall Condition: This rifle retains about 95% of its metal finish. The metal shows scuffs, light scrapes, and light thinning on the leading edges of the metal. The gas tube shows scrapes and a few small scratches. The sides of the trigger group show areas of thinning. The receiver and bolt show light operational wear. The markings are deep. Overall, this rifle rates in about Very Good Plus to Fine condition.

Box, Paperwork & Accessories:  The rifle comes with an owner’s manual and Certificate of Authenticity from the Civilian Marksmanship Program (CMP). The certificate is marked “M1 Garand Correct Grd” and with the rifle’s serial number.

This Harrington & Richardson M1 Garand was made in 1954. Its action uses all H&R parts. The rifle comes with a Civilian Marksmanship Program CMP Certificate of Authenticity that lists this as an “M1 Garand Correct Grd”. This is a good looking, collectible rifle with a strong bright bore. It will add to your Military Collection and should keep you smiling out at the range. Good luck.