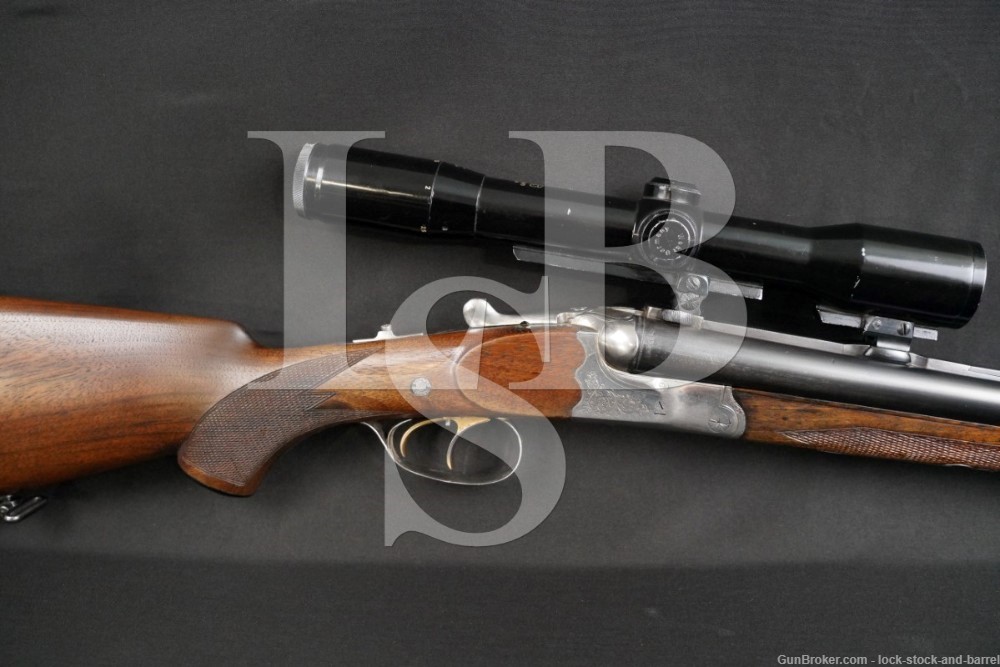 Sights / Optics: The front sight is a blade which is in-lined dovetailed to the front of the rib. There is a “U”-notch rear sight which flips up when the rifle barrel is selected using the switch on the top tang. The top-rear of the rib has claw-mounts with a Carl Zeiss Diavari-D 1.5-6x (first focal plane) scope with german post reticle. The scope has scattered light wear on the body, one more notable dent on the top edge of the objective bell. The glass is fairly clear but could use a good cleaning.

Stock Configuration & Condition: The stocks are two piece checkered walnut with a splinter forend, capped pistol grip, arched comb with European-style cheekpiece, and serrated black hard rubber buttplate. There is a sling swivel in the belly and another mounted to the bottom of the barrel rib forward of the forend. The stocks have some scattered light nicks, scuffs and scratches with light handling wear in the grip areas. The checkering is well defined. There are no chips or cracks. The LOP measures 14″ and 13″ from the fronts of the triggers to the back of the buttplate. The has light wear, well defined serrations, and some stubborn residue in the serrations on the right edge. Overall, the stocks are in Very Good condition.

Finish Originality: Refinished, the rifle barrel appears to be a replacement.

Bore Condition: The rifle bore is mostly bright with sharp rifling. There is infrequent minor erosion in the bore. The shotgun bores are semi-bright with scattered light pitting.

Overall Condition: This drilling retains about 85% of its current metal finish. The finish is thinning at all edges. The barrels have scattered light finish wear and some minor surface oxidation with surface erosion under the finish at the breech-end of each shotgun barrel. The receiver’s coin finish is generally bright with scattered spots of minor oxidation. There are several scattered minor nicks, scuffs and scratches. The screw heads are tool marked with strong slots. The markings range from clear to worn and incomplete. Overall, this drilling is in Good-Very Good condition as refinished.

Mechanics: The action functions correctly. The safety is on the left side of the wrist above the triggers and blocks them when on. The selector switch for the barrels is on the upper tang, and when the switch is pushed forwards into the rifle position, the front sight pops-up. With the rifle barrel selected, the front trigger is used to fire the rifle barrel, but the left shotgun barrel can still be fired using the rear trigger. The front trigger can be set by pushing it forward until it clicks. The barrels lock up with no play. We have not fired this drilling. As with all used firearms, a thorough cleaning may be necessary to meet your maintenance standards.

Box, Paperwork & Accessories: The installed scope is included as described.

Our Assessment: This drilling was made by Sempert & Krieghoff in 1930 and has since been restored, most recently proofed in 1984. While they are best known today for their line of competition shotgun which began with the K-32 in 1957, the history of Krieghoff goes back to 1886 and was originally focused almost exclusively on hunting guns. This example has two 16 GA barrels, choked Full, over a 6.5x57R rifled barrel. The rifled barrel appears to be a newer addition, with a seam just in front of the barrel lug and stronger markings than on the shotgun barrels. This may also account for the 1984 proof marks which were applied at the Mellrichstadt proof house. The shotgun chambers are 2 ½” in length, meant for the old 65mm rounds, not the 70mm rounds made today. The barrels are blued and the receiver was case hardened and now has a bright coin finish. A distinguishing feature of this gun is its rear sight, which pops-up when the rifled barrel is selected, though the rifle will also take advantage of the included Zeiss scope. This drilling is in Good-Very Good overall condition and would rate Very Good as just a rifle, but there is some pitting in the shotgun bores. It has wear consistent with a gun which has seen time in the field, but certainly looks like it could be returned to the field with proper care. If you’re not looking to hnt, it will also make a nice addition to a collection of classic German hunting guns or drillings, specifically. Please see our photos and good luck!