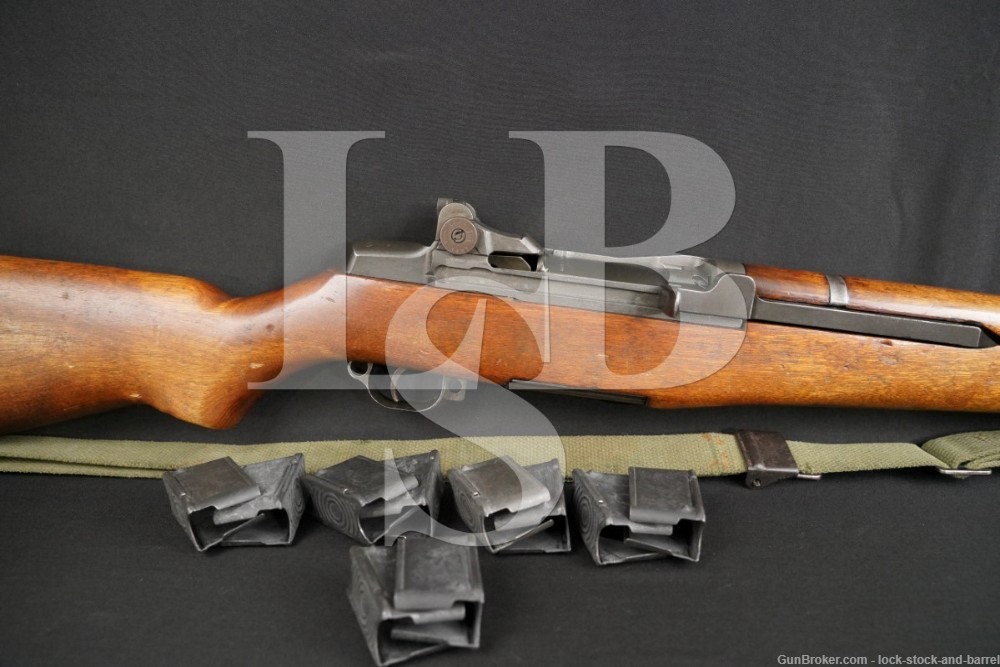 Stock Configuration & Condition:  The hardwood stock has a pistol grip, metal nose caps, stacking loop, two sling loops and a metal buttplate with hinged door for storage in the butt. The buttplate shows scrapes, small scratches and a small shallow dent. The wood shows numerous scrapes, scratches and compression marks. Several have damaged or removed small areas of the surface wood. The LOP measures 13 inches from the front of the trigger to the back of the buttplate. The stock rates in about Very Good condition.

Bore Condition: The bore is gray. The rifling is well defined; shallow at the muzzle. There is heavy erosion in the bore. The bore shows an M.E. of 4.2. The throat shows a T.E. of 7.5.

Box, Paperwork & Accessories: The rifle has an unmarked canvas sling attached. A combination tool and plastic oiler are stored in the butt. One side of the oiler contains agrease. The rifle comes with 10 M1 Garand clips.

This Springfield Armory M1 Garand was made back in 1942. After WWII is served for a US friendly country and was eventually imported back into the US for sales to the civilian market. It is marked accordingly on the barrel. The rifle has been rebuilt and refinished. The rifle uses mostly Springfield parts but does have a Winchester barrel installed. The rifle uses a National Match rear sight and a National Match op rod. The bore isn’t the brightest but this M1 Garand can still put lots of lead down range. Good luck.