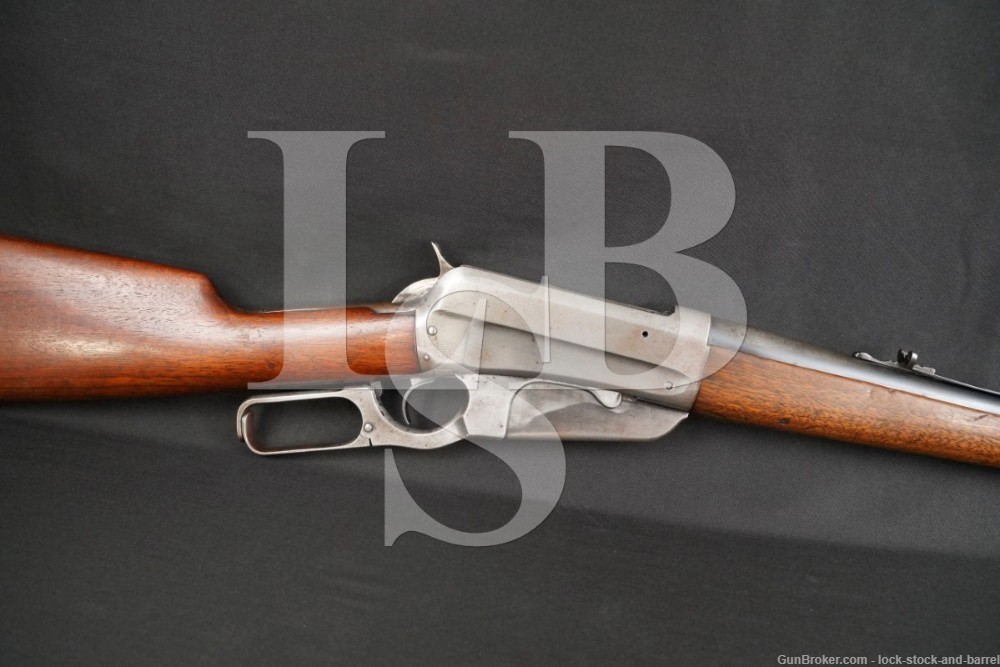 Markings: The left of the barrel is marked “—NICKEL STEEL BARREL— / ESPECIALLY FOR SMOKELESS POWDER” and “30 ARMY”. The left side of the receiver is marked “MANUFACTURED BY THE WINCHESTER REPEATING ARMS CO. NEW HAVEN CONN. CONN. U.S.A.” over patent dates. The top tang is marked “MODEL 1895 / —WINCHESTER— / TRADE MARK REG. IN U.S. PAT OFF”.

Sights/Optics: The front sight is a beaded blade pinned in a slotted base fixed to the front of the barrel. The rear sight is a “V”-notch elevator sight dovetailed into the barrel, the notch is fine-adjustable for elevation.

Stock Configuration and Condition: The stocks are two-piece smooth walnut with schnabel forend with triangular ebony inlay at the tip, straight grip, straight comb, and a steel carbine-style butt plate with a sliding door over a storage compartment (there is nothing in the storage compartment). The stocks have some scattered nicks, dings, scuffs and scratches. There is more notable bruising around the rear of the top tang and a couple of more notable dings in the comb. There are some very minor grain-line cracks at edges and a couple of small losses at the top-front corners of the wrist. The LOP measures 12 5/8″ from the front of the trigger to the back of the buttplate. The plate has scattered wear, heaviest at the heel and toe, with scattered light surface oxidation. Overall, the stocks are in Good-plus condition.

Bore Condition: The lands are gray, the grooves are dark. The rifling is well defined. There is light erosion on the lands with more moderate erosion in the grooves. Our gauge shows an ME of about 4.5.

Overall Condition: This rifle retains about 35% of its metal finish. Most of the remaining finish is on the barrel which has scattered finish wear with strongest finish around the sights and edges of the forend and receiver. There is a little bit of finish remaining on the flats of the magazine and portions of the lever assembly which are concealed when the action is closed. Most of the receiver has been worn to white or polished. The worn areas show scattered discoloration from oxidation with infrequent minor erosion. There are some scattered light nicks, scuffs and scratches. The action shows operational wear. The markings range from clear to worn, but legible. The screw heads range from sharp to disfigured with useable slots. There are tool marks around some screw heads. Overall, this rifle is in about Good condition.

Our Assessment: The 1895 Winchester was the first lever action model to incorporate a fixed box magazine (i.e., it could not be removed). This is the model Teddy Roosevelt used for hunting both here in the United States and in Africa—he referred to it as his “Big Medicine”. With quick handling characteristics, a box magazine, and spitzer—more aerodynamic, accurate—bullet capability, the Model 1895 completely changed the world of sporting rifles. This rifle pattern was utilized by major powers worldwide, with Russia alone purchasing nearly 300,000 1895 rifles in the lead-up to World War I. In 1898, the United States ordered 10,000 1895 rifles in musket form for use in the Spanish-American War (the war ended before they could be delivered, however). 100 of those were issued for field testing in the Philippines and the remaining 9,900 were later sold to a private business. Many 1895 rifles were shipped to the new Cuban government in 1906 and some even found their way to Pancho Villa’s troops in Mexico. The U.S. Government also ordered carbines, but we are, as of this writing, unable to find records as to just how many. This saddle ring carbine was made in 1923 during the inter-war years. This example, chambered in .30-40 Krag, is a later version made just prior to the massive Russian order of 1915/1916. Note the grooved slab sides of the receiver, the later magazine profile, and the flat top profile of the bolt. This 107 year old rifle is mechanically sound, and has a fair bore. The plain fact is, Winchester rifles were exceedingly well built, and regardless of the wear present, it ought to function just as well as ever. Whether you’re looking to add to your Winchester collection or want to restore this for use as a classic hunting rifle, this would be a good addition to any safe in America. Good luck and happy bidding!