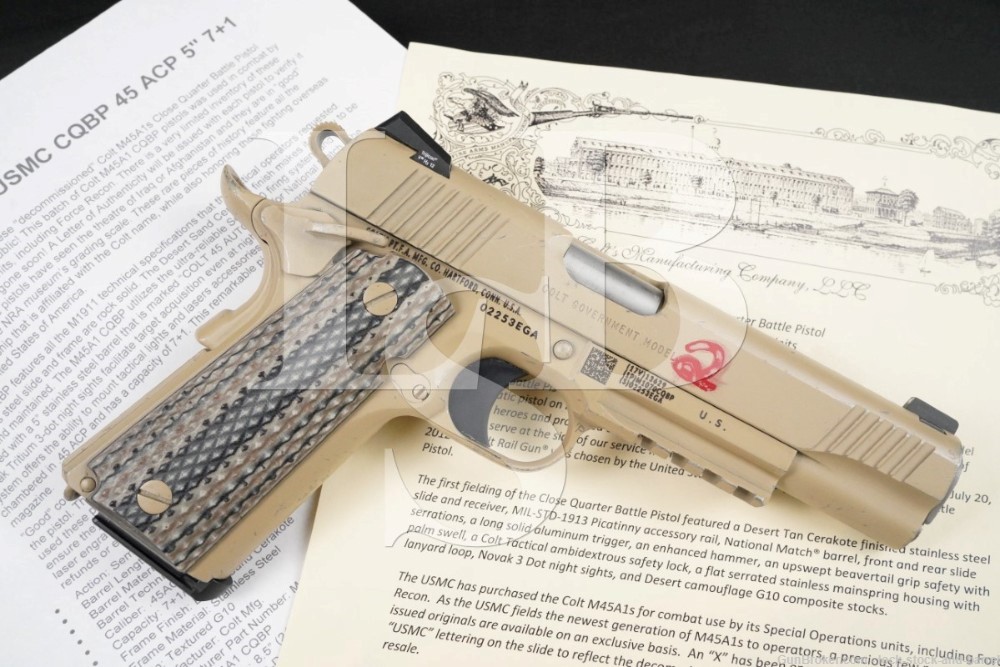 Sights / Optics: The front sight is a Trijicon blade with a slightly ramped rear face and inset tritium lamp, dovetailed to the slide. The rear sight is a square-notched Novak base with one inset tritium lamp to each side of the notch that is dovetailed into the top rear of the slide. The lamps have dimmed somewhat but are still useable in very low-light environments.

Stock Configuration & Condition: The grips are textured G10 panels. The grips have a few scattered light nicks and scuffs. There are no chips or cracks. Overall, the grips are in Fine condition.

Overall Condition: This pistol retains about 92% of its metal finish. There are scattered light nicks, scuffs and scratches. The finish is thinning at most edges. The action shows operational wear. The screw heads are tool marked with strong slots. The markings are clear. Overall, this pistol is in Very Good condition.

Mechanics: The action functions correctly. The trigger breaks crisply. The slide has light play to the frame. We did not fire this handgun. As with all used firearms, a thorough cleaning may be necessary to meet your maintenance standards.

Box, Paperwork & Accessories: This pistol comes with a total of one 7-round Wilson Combat magazine. Also included is a Colt letter confirming the authenticity of this decommissioned pistol.

Our Assessment:  On July 20, 2013, about 101 years after the 1911 was first adopted by U.S. Armed Forces, the Marine Corps for use by several of their Special Operations Capable units as well as their pistol shooting team. The pistol has several upgrades over the original Model of 1911, including front and rear slide serrations, night sights, accessory rail, extended beavertail grip safety, skeletonized hammer, ambidextrous thumb safety, National Match barrel and Cerakoted stainless steel slide and frame.

We have seen a couple of these decommissioned CQBPs which were in nearly pristine condition, a great feature for some collectors, but this one has wear consistent with actual service use as well as having been marked with a rack number on the slide. While some like putting aside an example in the highest possible condition, this example looks like it has traveled to distant and exotic places, met interesting and exciting people. This pistol also comes from the collection of author Kevin Williams, best known for his exceptional work on the topic of General Officers Pistols & Clandestine Organization Pistols of WWII. Combined with the Colt letter, this pistol is, as the letter describes it, a “unique piece of American history”. This pistol is a must have for any U.S. Military pistol collection or 1911 collection. Please see our photos and good luck!