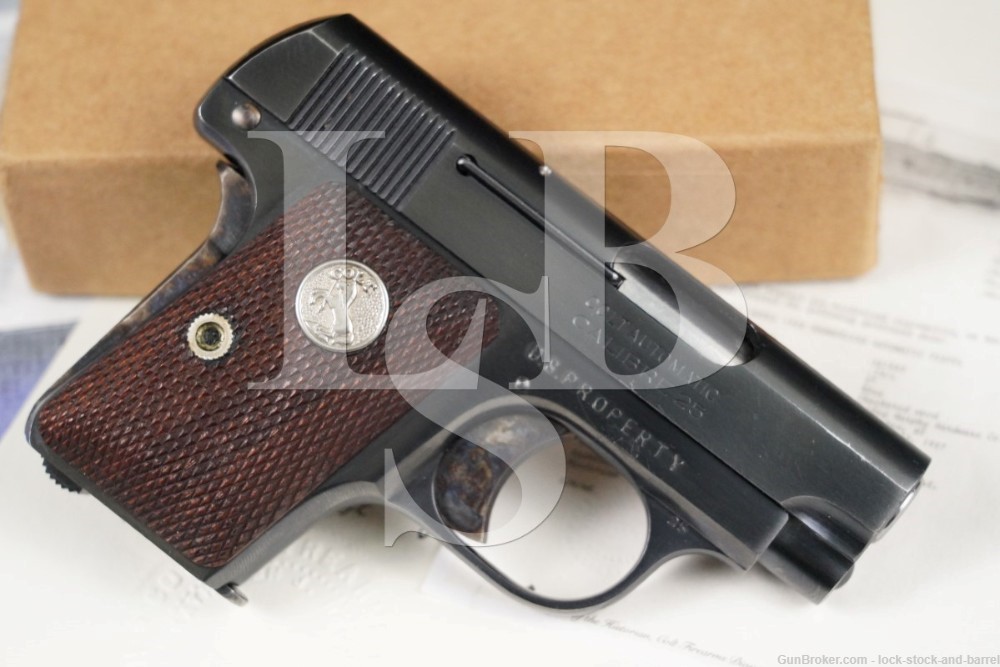 Sights / Optics: The front sight is a tiny blade that sits in the front of the “U” groove that runs the length of the slide. The rear sight is a tiny square notch in the back of the groove. The groove has fine serrations for glare reduction.

Stock Configuration & Condition: The grips are two-piece checkered walnut with silver-colored Colt medallions at their tops. The grisp have minor handling wear with some verdigris around the screw escutcheons. The checkering is well defined. There are no chips or cracks. Overall, the grips are in Fine-plus condition.

Overall Condition: This handgun retains about 97% of its metal finish. The finish is lightly thinning at some edges. The trigger guard has a spot of finish wear at the bottom-front. Otherwise, there are only light handling marks. The controls retain strong case color. The screw head is lightly tool marked with a strong slot. The markings are clear. Overall, this pistol is in Fine-plus condition.

Mechanics: The action functions correctly and the slide has very little play to the frame. This pistol has a slide locking safety, a grip safety and the magazine disconnect added to this model after 1917. We did not fire this handgun. As with all used firearms, a thorough cleaning may be necessary to meet your maintenance standards.

Box, Paperwork & Accessories: This pistol comes in a (modern) two-piece cardboard craft box with a single six round magazine, Colt letter and a copy of the page in Charles W. Pate’s book “U.S. Handguns of World War II The Secondary Pistols and Revolvers” where this pistol’s U.S. Property marking is photographed and discussed. The two-tone magazine’s floorplate is marked “CAL. 25 / COLT”. The magazine has light operational wear, scattered minor surface oxidation, intact feed lips and a strong spring. The Colt letter indicates that this pistol shipped February 25, 1927 to Morley Murphy Hardware Co. in Milwaukee, Wisconsin as one of 6 pistols of the same type in the shipment.

Our Assessment: The Model 1908 Vest Pocket is a compact, hammerless, striker-fired, semi-automatic single action pistol. Manufactured by the Colt’s Manufacturing Company from 1908 to 1948, it was marketed as a small concealable firearm, which could be easily tucked into a gentleman’s vest pocket for unobtrusive carry. Created by famed firearms designer John Moses Browning, the Model 1908 followed Browning’s earlier European version, the FN Model 1906.

This pistol’s markings are quite interesting, if something of a mystery. There have certainly been some spurious U.S. markings applied to Vest Pocket pistols, but there are more than two dozen documented examples which were in U.S. service, mostly with the Office of Strategic Services (OSS). Even among the documented examples, there is some variance in the type and size of markings, and Colt’s records indicate that most or all originally shipped to commercial sellers, not purchased directly on a government contract.

This example has quite a good pedigree as these things go. Not only does the pistol come from the collection of author Kevin Williams, best known for his exceptional work on the topic of General Officers Pistols & Clandestine Organization Pistols of WWII, it also was photographed in Charles Pate’s book on U.S. secondary sidearms of WWII. Despite the interest that well informed authors have shown in this pistol, apart from comparison of the markings with other examples, there is no definitive documentation of its U.S. Property markings’ authenticity. In any case, this is a nice example of the 1908 Vest Pocket, and it would make a nice addition just by virtue of coming from Williams’ collection and being photographed in Pate’s book. Please see our photos and good luck!