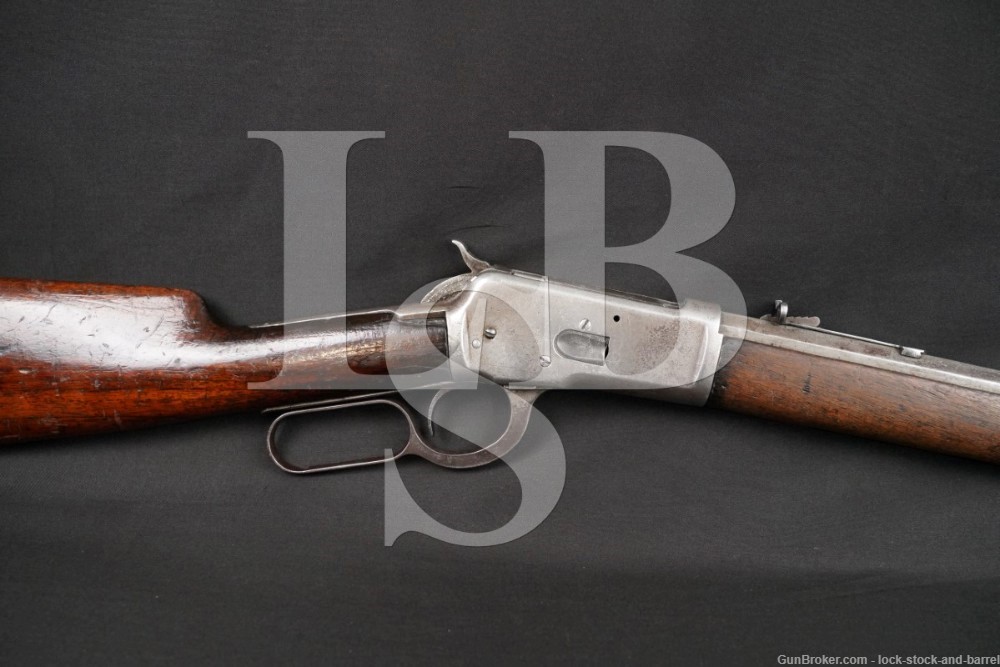 Barrel Length: The octagonal barrel has been cut to 20″.

Stock Configuration & Condition: The stocks are 2-piece smooth walnut with capped forend, straight grip and steel crescent buttplate. There is a silver-colored shield-shaped plate mounted to the comb a little rear of center. The stocks have scattered light-moderate nicks, dings, scuffs and scratches, more in the buttstock than the forend. The forend has a chip-loss on the top-right edge which has been sanded down some, a long crack at the bottom-rear and a shorter crack at the left-rear. The buttstock has chip-losses at the front corners of the wrist, most notable on the right at the top-front. There are cracks in the front of the wrist and at the toe on each side. There is notable sanding at the rear of the comb where it is shy to the front edge of the buttplate’s top tang. Both the stock and forend have minor play to the gun. The LOP measures 12 3/4″ from the front of the trigger to the back of the buttplate. The plate has gone to a light patina with scattered erosion, most notable at the heel and toe. Overall, the stocks are in about Good condition as refinished Antique.

Finish Originality: The finish appears to have been intentionally removed, but there are no signs of a new finish being applied. Most surfaces show signs of aggressive cleaning.

Bore Condition: The bore has been re-lined. The bore is bright with sharp rifling. There is no erosion in the bore.

Overall Condition: This rifle retains about 0% of its metal finish. The exposed surfaces have been cleaned or polished bright. There is scattered light erosion and minor pitting which has been mostly scrubbed out and discoloration from oxidation. The magazine tube has damage and repair around its bracket, it is likely that the follower cannot pass the location of the bracket. There are scattered nicks, scuffs and scratches. The action shows operational wear. The screw heads range from sharp to disfigured with questionably useable slots. The markings range from clear to worn, but legible. Overall, this rifle is in Fair-Good condition as Antique.

Our Assessment: The Winchester Model 1892 rifle and carbine replaced the toggle link action of Winchester’s Model 1873 with a breechblock locked with two rectangular locking bolts that made it much stronger and suitable for the higher pressures of smokeless powder. It was designed by John Browning, and was sort of a scaled-down Model 1886 rifle, the first he designed for Winchester. The Model 1892 rifle was popular with ranchers and later was the rifle of choice for western movies and TV shows, John Wayne used both M1892 rifles and carbines in many of his western movies.

The M1892 rifles again became popular in the 1980s with the advent of Cowboy Action shooting, as they were smooth and dependable. This is a Model 1892 rifle which has had its octagonal barrel cut down to 20″ and re-lined, so it has a great bore. Made in 1896 and chambered in .38-40 Win., the rifle shows its age on the outside. Apart from what appears to be a modification or repair to its magazine tube, the action still functions properly. With its new bore, it would be well worth restoring. As it sits, it will still make a great display piece with its “been there, done that” appearance. Please see our photos and good luck!