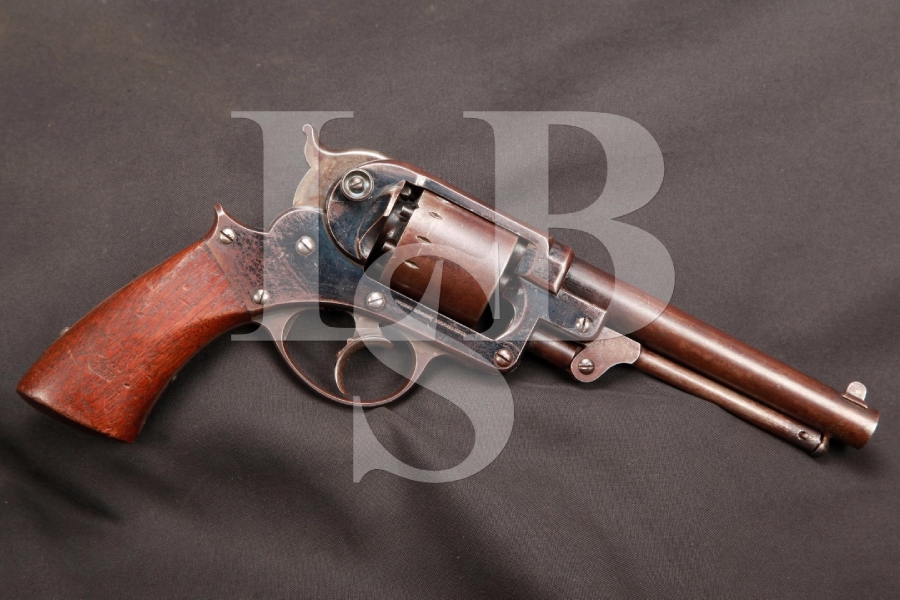 LSB#: 140325XX10
Title: U.S. Marked Starr Arms Double Action 1858 Army Revolver .44 Percussion Revolver – Antique
Make: Starr Arms Co.
Model: Double Action 1858 Army Revolver
Serial Number: 5334
Year of Manufacture: 1861 – 1864
Caliber: .44 Cap and Ball
Action Type: Self-Cocking Percussion Black Powder Revolver
Markings: The left side of the barrel is marked “W” near the frame and the underside of the barrel is marked “5334” above the pivot screw for the loading lever and ram. The front of the frame is marked “5334 / B” just below the loading ram. (The “B” is deep, but very indistinct.) The left side of the frame is marked “STARR.ARMS.Co.NEW.YORK.” below the cylinder window and “W” below the thumbpiece screw. There is also a “W” on the left side of the top strap extension, just ahead of the thumbpiece screw. There is a “W” behind the forward trigger guard screw and “5334” is marked on the left side of the combination trigger guard/front grip strap. The hinged backstrap is marked “5334” on the inside face. The forward inside arc of the hammer is marked “5334” as is the arched portion of the frame beneath it when the hammer is at rest. The right side of the frame is marked “STARR’S PATENT JAN.15.1856.” The cylinder’s circumference is marked with a “W” and “5334”. The left side of the one piece walnut grip is marked with a rectangular cartouche “R.H.K.W.” (Robert Henry Kirkland Whiteley Capt., USA Aston Navy Pistols, Colt Dragoon and M1851, Starr and Savage Revolvers, Sharps Carbines 1838-1875) and the right side has an ovalled cartouche marked “ADK” (A.D. King Colt 3Rd Model Dragoon, Colt M1851 Colt M1861 and Starr Revolvers, Ames M1840 Heavy Dragoon Saber 1850-1865). The inside top edge of the grip has “5334 / K” pressed into the wood.
Barrel Length: 6”
Sights / Optics: The front sight is a half round blade set in a dovetail on the barrel. The rear sight is a tiny “V” notch in the hammer’s nose.
Stock Configuration & Condition: The one piece grip is smooth walnut. There are handling and compression marks scattered throughout, but no chips, cracks or scratches. The left side of the one piece walnut grip is marked with a rectangular cartouche “R.H.K.W.” and the right side has an ovalled cartouche marked “ADH”. The inside top edge of the grip has “5334 / K” pressed into the wood. The grips rate in about Fine overall condition for an antique.
Type of Finish: Blue
Finish Originality: Original
Bore Condition: The bore is almost bright and the rifling is distinct. There is some scattered erosion in the bore.
Overall Condition: This handgun retains about 60% of its metal finish. The flats of the frame retain the most finish, with the finish on the trigger guard, cylinder and barrel mostly turned to patina. The barrel and loading lever show many light scattered compression marks. The hammer retains some of its case coloring. The screw heads are all serviceable, although they bear marks of a screwdriver. The raised ridges (similar to knurling) on the edge of the thumb screw remain almost pristine. The markings are clear except as discussed. Overall, this handgun rates in about Fine to Excellent condition as an antique.
Mechanics: The action functions correctly. The large forward trigger is the self-cocking, or double action trigger. If pulled all the way through, the hammer cocks and the large forward trigger hits the smaller rear trigger and causes the hammer to fall, similar to a normal double action revolver. If pulled part of the way, the hammer may be set at full cock. In this condition, pulling on the smaller rear trigger causes the hammer to fall, in effect firing the revolver is single action. Removing the thumb screw allows the barrel to pivot up and forward, allowing the cylinder to be easily removed and the barrel to be easily cleaned. We did not fire this handgun.
Box, Paperwork & Accessories: None
Our Assessment: This is a Starr Double Action Army 1858 Revolver in .44 caliber, as opposed to the Starr Double Action Navy 1858 Revolver which was in .36 caliber. This is an original revolver, not a replica as made by Pietta. It is in strong mechanical condition and in Fine to Excellent condition cosmetically for an antique service revolver. Over 20,000 of these revolvers were sold to the Union Army making it third in use, after Colt and Remington. If the revolver looks vaguely familiar to you, it was featured prominently in movie posters for Clint Eastwood’s “Unforgiven”. The posters usually show Eastwood in character as William Munny, his back to the camera, holding the revolver in his right hand. This is a rare revolver surviving with a fair amount of finish and with all numbered parts matching. There are U.S. Inspection marks on the individual parts and the cartouches of Robert Whiteley and A.D.King, who were both sub-inspectors for Starr revolvers. This revolver will make a great addition to any Civil War or Old West firearms collection.