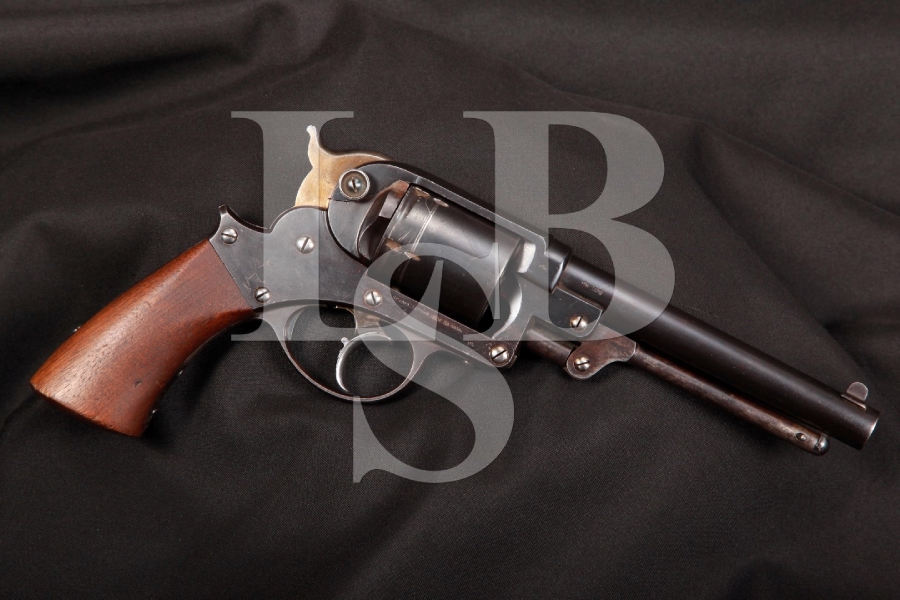 LSB#: 141203JM10
Make: Starr Arms Co.
Model: Model 1858 DA Army
Serial Number: 6404
Year of Manufacture: The revolver was made in the late 1850’s to early 1860’s and converted to cartridge use after 1894.
Caliber: .45 Colt
Action Type: This is a single or double action revolver with a top brake opening action. The top strap is secured to the frame via a screw with a large knurled head for easy removal. The cylinder must be removed for reloading and removal of spent cartridges.
Markings: The left side of the frame is marked “STARR ARMS CO. NEW YORK”. The right side of the frame is marked “STARR’S PATENT JAN. 15, 1856”. The underside of the barrel lug is marked “6404 / 5”. The frame flat under the cylinder is marked “6404” and “20”. The right side of the barrel at the receiver is marked with a “Crowned R” proof and a “* / q” inspection mark, the latter of which is also marked at the right front of the top strap and at the right front of the frame The “Crowned R” proof was used by Belgium after 1894 to denote a rifled barrel. The left rear of the barrel is marked “W”. The front face of the cylinder is marked “20”, and the circumference is marked with “* / q”, a “Crowned L” and a “Crowned ELG / *” post 1893 Liege proof. The left side of the front strap “6404” and the inside surface of the backstrap are marked “6404”. The top of the grip is marked “6404” and “K”.
Barrel Length: The round barrel is 6” in length.
Sights / Optics: The front sight is a tall rounded blade dovetailed into the barrel. There is no provision for a rear sight.
Stock Configuration & Condition: The grip is one piece walnut with flats at the top of each side. There are several compression marks/chips around the bottom edge of the grip with one large but shallow compression mark at the right front. There are also a few compression marks on the bottom surface and the sides of the grip. The grips rate in about Fine overall condition.
Type of Finish: The finish is blued. The hammer and trigger have a straw colored finish.
Finish Originality: The finish is not original.
Bore Condition: The bore is bright with 6 equally spaced grooves and lands. The rifling is somewhat shallow but shows only very light wear on its edges. There are a few spots of very light erosion near the muzzle.
Overall Condition: This revolver retains about 85% of its current metal finish. There is thinning on the loading lever, front strap, backstrap, trigger guard and the front edge of the cylinder. There are a few tiny compression marks on the right side of the frame above the trigger, the left side of the top strap and along the top rear edge of the frame. There are light handling marks along the left side of the barrel. There is bright drag line and a small compression mark in the cylinder. The screw heads are sharp and the markings are clear. Overall, this revolver rates in about Fine condition as re-finished.
Mechanics: The action functions correctly. There are two triggers and a selector switch on the back of the front trigger that selects either SA or DA mode when up or only SA mode when pushed down. The front trigger can be pulled all the way back and fired in double action mode. Or, the front trigger may be pulled slightly back, cocking the rear trigger. The hammer may then be pulled back manually and cocked, and the rear trigger used to fire the revolver. There is a small amount of play in the cylinder lock-up. The loading lever was retained, although it no longer has a purpose. We did not fire this handgun.
Box, Paperwork & Accessories: None
Our Assessment: This is Star Model 1858 DA Army revolver that has been converted from .44 Percussion to .45 Colt cartridges. From http://www.nramuseum.org/guns/the-galleries/a-nation-asunder-1861-to-1865/case-16-union-pistols-and-revolvers/us-starr-arms-co-1858-double-action.aspx: “Starr revolvers, in both single-and double-action models, represented over 12 percent of the sidearms issued to Union cavalry troops. Only Colt and Remington revolvers were more frequently encountered in the hands of Northern soldiers.”. Whether Colt and We suspect this revolver was an Army surplus revolver that was acquired by a Belgian firm which converted it to cartridge use in the late 1890’s or early 1900’s. It was then either sold back to American wholesalers or somehow found its own way back to America. This revolver has been refinished and it retains about 85% of its current finish. There is thinning on the loading lever, backstrap, front strap, trigger guard and the front edge of the cylinder. There are also several handling marks scattered around the finish and a bright drag line on the cylinder. The wood grip shows several compression marks on its bottom edge. The bore is bright with sharp but shallow erosion and a few spots of very light erosion. This is a very unique operating revolver with features that you don’t see on other firearms. The dual trigger arrangement with mode selector switch appears simply constructed, though, and Star was able to sell about 23,000 of these for about $25 to the U.S. Government and to civilians and still make a profit. Even with it having been refinished and converted to cartridge use, collectors of Civil War weapons are bound to show a big interest in this revolver. There can’t be that many left that are still fully functional with all matching part numbers.