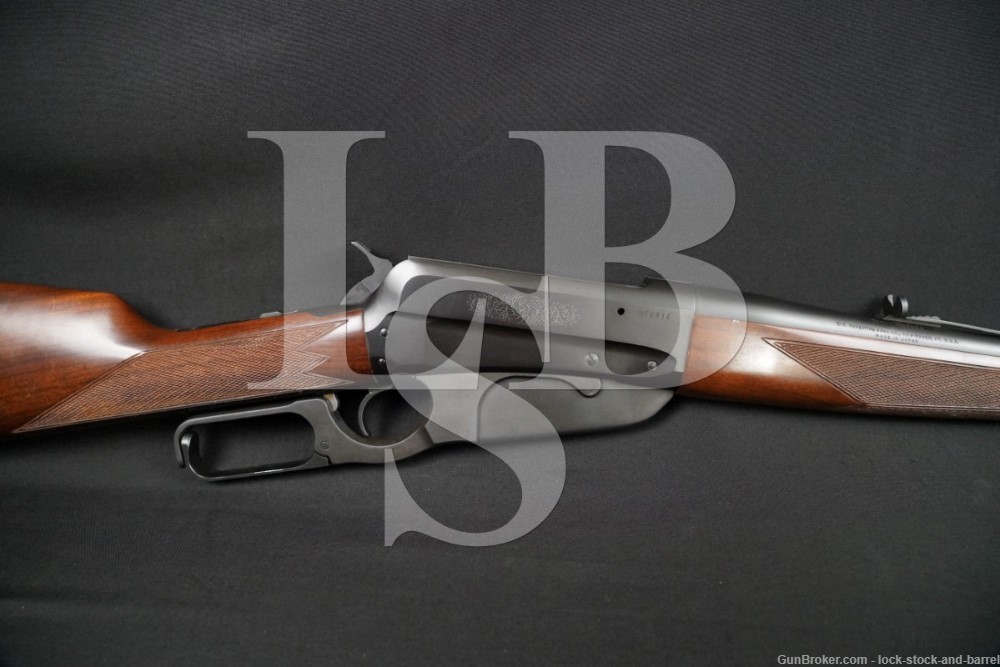 Make: Winchester, made by Miroku for U.S. Repeating Arms Co.

Stock Configuration & Condition: The stocks are two-piece checkered walnut with a schnabel forend, straight grip, straight comb, and a steel buttpad. There are little nicks and scratches on the right side of the buttstock and on the forearm, notably on the left and on the bottom front. There are some minor dings and draglines near the toe. There are some other infrequent minor handling marks throughout. The checkering is sharp. There are no chips or cracks. The LOP measures 13 1/4? from the front of the trigger to the back of the buttplate. The plate has some light dings and faint scratches. Overall, the stocks are in about Very Good-Fine condition.

Bore Condition: The bore is bright and the rifling is sharp. There is no erosion in the bore. There is light fouling on the lands.

Overall Condition: This rifle retains about 97% of its original metal finish. There are some scattered faint lines about the metal, most notably on the lever and magazine. Otherwise, there are only light handling marks. The screw heads are sharp. The markings are clear. Overall, this rifle is in about Fine-Plus condition.

Mechanics: The action functions correctly. The hammer has a half-cock safety, there is a tang-safety and the trigger pull is crisp. We have not fired this rifle. As with all used firearms, a thorough cleaning may be necessary to meet your maintenance standards.

Our Assessment: The 1895 Winchester was the first model to incorporate a non-detachable box magazine. Teddy Roosevelt called this model, chambered in .405 WCF, his “Medicine Gun for Lions” (from his book “African Game Trails”). The M1895 rifle became the preference of major powers worldwide, with Russia alone purchasing nearly 300,000 1895’s for use in the Great War. The Model 1895 was designed for the new generation of cartridges utilizing smokeless powder and pointed bullets, and many of its original chamberings remain popular today. With its quick handling characteristics, box magazine and pointed bullet capability, the Model 1895 changed the world of sporting rifles forever. In the late 1990s and early 2000s, the U.S. Repeating Arms Co. licensed Miroku to produce a limited re-introduction of the design. The rifles were chambered in a variety of original calibers, such as this .30-06 Winchester. This rifle is in Fine-Plus condition with minor handling marks, a great bore and strong mechanics. With its limited production, Winchester collectors who missed their chance when this re-introduction first took place will want to jump on this one. If they fall asleep at the wheel, this will make someone a great “Medicine Gun”. Please see our photos and good luck!