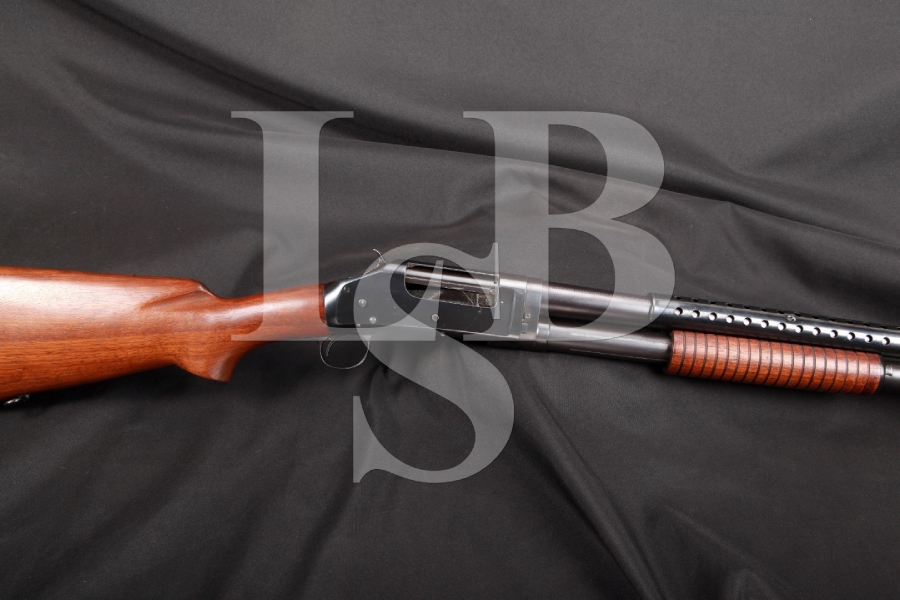 LSB#: 141216BT01
Make: Winchester
Model: 1897 Takedown Frame Trench
Serial Number: 950667
Year of Manufacture: WWII Serial Number Range According to Joe Poyer’s U.S. Winchester Trench & Riot Guns book. Under the barrel just ahead of the receiver is marked “44” for the barrel date code.
Gauge: 12 Gauge 2 ¾”
Action Type: Pump/Slide Action Shotgun with Tubular Magazine
Markings: The left side of the receiver is marked “U.S.” followed by the ordnance flaming bomb. The barrel extension is marked “950667” The underside of the receiver is marked “E / 950667”. The top of the receiver is marked with the Winchester Proof. The top of the barrel forward of the receiver is marked with the Winchester proof and a “P” in a circle. The barrel is marked with the standard Winchester barrel address and various patent dates. The left side of the barrel is marked “MODEL 97 WINCHESTER / TRADE MARK – 12 GA. 2 ¾ CHAM. / CYL”. The left side of the buttstock is marked with the U.S Govt. Inspector’s initials “G.H.D.” in a rectangle over the ordnance department’s Crossed Cannon cartouche. The GHD cartouche is for Colonel (later, Brigadier General) Guy H. Drewry. Meaning this gun was purchased by the Ordnance Department after May 1942. Under the barrel just ahead of the receiver is marked “44”. We have learned that the lower “P” and lack of ordinance bomb on the barrel indicates that this barrel is a replacement / mail ordered barrel. This may explain the nearly perfect condition… We imagine the gun was held behind at an arsenal awaiting a new barrel (Which was manufactured in 1944 and marked “44”), which didn’t get installed until the war was over… Thus saving it from beach landings and combat use.
Barrel Length: Standard 20”
Choke: Cylinder
Sights / Optics: This shotgun is mounted with a small silver bead on the bayonet lug
Stock Configuration & Condition: The forend is ribbed walnut. There is light wear to the lacquer on the belly and the sides of the forend. There are also a few light compression marks. The buttstock is smooth walnut with a sling swivel inlayed into the belly. There is a “G.H.D” proof over the crossed cannons in a wheel proof described in further detail in the Markings Section. The buttstock only shows a few scattered light compression marks and scuffs in the finish. The LOP measures 13 ½” from the front of the trigger to the back of the Winchester buttplate which rates in Fine condition. The stocks rate in about Fine overall condition.
Type of Finish: Blue
Finish Originality: All Original
Bore Condition: The bore is bright. There is No erosion. There are three light distortions from the bayonet lug screws. We have seen this on numerous other trench guns.
Overall Condition: This shotgun retains about 97% of its metal finish. The balance of the finish shows light wear on the magazine tube from the action as well as some marks at the tip of the magazine tube which exposed the bare metal beneath. There are a few light scratches on the left side of the receiver above the US marking which can be felt with the fingernail. One imperfection is that someone tapped the frame with a hammer causing a light compression mark while driving in the trigger pin. The screw on the left side of the receiver at the belly is marred. The screw heads are mostly sharp. There is a screwdriver mark on the bayonet lug around the forward most screw. The markings are clear and sharp. Overall, this shotgun rates in about Fine condition.
Mechanics: The action functions correctly. We have not fired this shotgun.
Box, Paperwork & Accessories: None
Our Assessment: After observing the Great War for the first three years, it became clear to the U.S. that serious close-range firepower was needed in trench warfare. The Model 1897 Trench grade was an evolution of this idea. The pre-existing Winchester Model 1897 was modified by adding a perforated steel heat shield over the barrel which protected the hand of the user from the barrel when it became over-heated, and an adapter with bayonet lug for affixing an M1917 bayonet. American soldiers who were skilled at trap shooting were armed with these guns and stationed where they could fire at enemy hand grenade s in midair. This would deflect the grenades from falling into the American trenches and therefore protect American soldiers. They were so effective and brutal in combat that the German high command once announced they would execute any US soldier captured with one in his possession. The amount of history that this gun could have seen and lived through is truly incredible. Our research and analysis leads to the conclusion that this is a true WWII trench gun and is absolutely without a doubt the most beautiful and near pristine example we have ever seen. It is important to note that this barrel is not the one that was shipped out of the factory. From what we can tell, there may have been a defect in the original barrel. This barrel was ordered by the arsenal as a replacement which caused this shotgun to be left behind and never shipped out for combat. We believe this barrel was installed by the arsenal during wartime as it has a 1944 date stamp. If you are a serious collector, you cannot let this one pass you by. This is a museum quality piece.