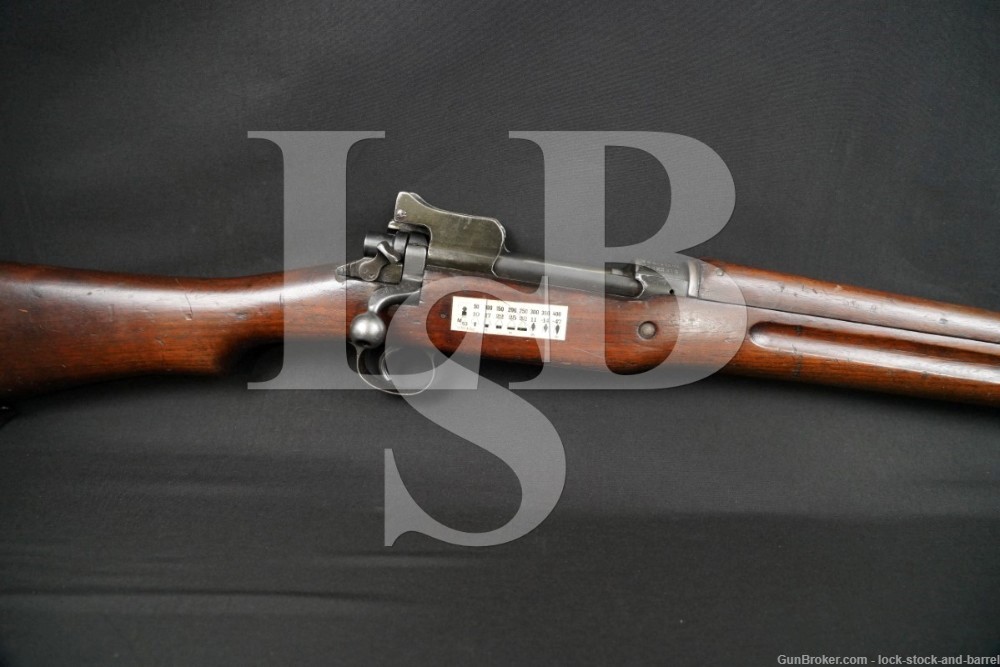 Markings: The import mark on the barrel reads “CAI ST ALB VT / CAL. .30-06”. The front of the Eddystone barrel is marked  “E / flaming bomb / 12-18” . The top of the receiver is marked “U.S. / MODEL OF 1917 / EDDYSTONE / 1350315”. The left side of the receiver and the top of the bolt handle are both stamped with a “flaming bomb” proof. The top of the bolt handle and top of the buttplate are marked with numbers that do not match the serial number. The top left of the receiver (twice), safety and bolt release lever are marked with “eagle head” inspection stamps. The bottom of the bolt handle, rear of the bolt assembly and the safety are each marked “E” for Eddystone. The  nose of the stock is marked “W” for Winchester. The right side of the butt is marked with 2 Canadian acceptance stamps “arrow inside a C”.  The left side of the stock has a trajectory sticker on it. The forearm is painted with a red band that is marked “30-06” (faded) on both sides.

Stock Configuration & Condition: The hardwood stock has a straight grip, cutout for the bolt handle, finger grooves, nosecap with bayonet lug, stacking loop, two sling loops, barrel band, through bolt, reinforcing pin, and a metal buttplate with a hinged door for storage. The buttplate shows scrapes, scratches and discoloration from oxidation. The wood shows numerous scrapes, scratches, and compression marks. Several have damaged small portions of the surface wood. The LOP measures 13 1/2 inches from the front of the trigger to the back of the buttplate. The stock rates in about Very Good overall condition.

Type of Finish: Blue. The receiver has been refinished in Gun Paint.

Finish Originality: Original Parts. The receiver has been refinished in Gun Paint.

Bore Condition: The grooves are gray. The rifling is deep. There is erosion in the bore. It is more prominent in the grooves. The bore shows an M.E. of 2.

Overall Condition: This rifle retains about 65% of its metal finish. The receiver has been refinished in gun paint. The metal shows scrapes, scratches, areas of thinning and discoloration from oxidation. The thinning and discoloration are more prominent on the barrel. The bolt and receiver show operational wear. The screws show heavy use and oxidation. The markings on the metal are deep. Overall, this rifle rates in about Very Good condition as refinished.

Our Assessment: The UK urgently needed rifles during WWI and could not produce enough. Contracts for the new Pattern 1914 (P14) Rifle rifle were placed with arms companies in the United States. The rifle was chambered in .303 for convenience of supply. Winchester, Remington and Eddystone Arsenal (a subsidiary of Remington) produced the P14 chambered in .303 British.
When the U.S. entered WWI, it had a similar need for rifles. Rather than re-tool the Pattern 14 factories to produce the Model 1903 Springfield, the P14 was modified to accept the U.S. .30-06 cartridge. Remington Arms Co. altered the P14 design for the .30-06. The new rifle was formally adopted as the U.S. Rifle, Caliber .30, Model of 1917.

This Eddystone Model 1917 was made just after WWI. It was eventually shipped off to a US friendly country where it most likely served through WWII. It is marked accordingly on the barrel. We believe this 1917 eventually served in Canada as it has Canadian acceptance marks on the stock. It may have also spent some time in England as the stock is marked with a red band and “30-06”. This was done to distinguish it from a Pattern 1914 Rifle that is visually identical but chambered in .303 British. The red band is a common marking for a British Model 1917.
This Model 1917 deep Eddystone markings on the receiver and barrel. It is over 100 years old and its markings tell a story. This Model 1917 will add to your WWI, WWII or Military collection. Good luck.