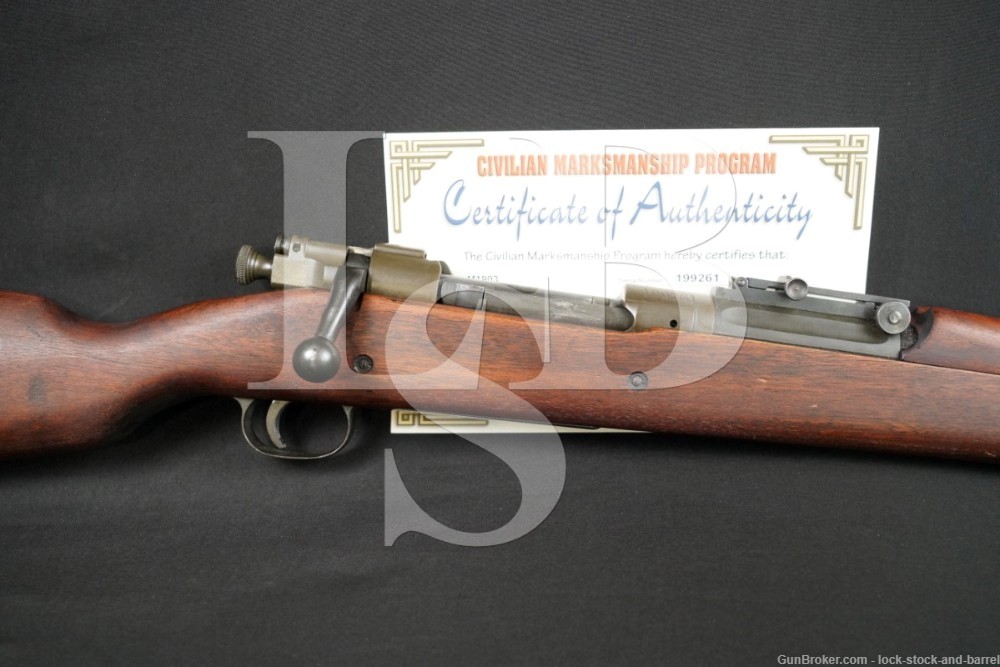 Stock Configuration & Condition: The two piece hardwood stock has a pistol grip, metal nosecap with bayonet lug, barrel band, stacking loop, 2 sling loops, 2 through bolts, and a metal buttplate with hinged door for storage. The buttplate and nosecap have been refinsihed in gun paint. Surface erosion shows through the new finish on the buttplate. The wood shows scattered scrapes, scratches and compression marks. There are more prominent marks on the left side ahead of the thought bolt. The LOP measures 13 inches from the front of the trigger to the back of the buttplate. The stock rates in about Very Good Plus overall condition.

Finish Originality: Original. The front of the barrel has been refinished in Gun Paint.

Overall Condition: The front of the barrel has been refinished in gun paint. This rifle retains about 95% of its current metal finish. The receiver has been treated with cold blue. It shows discoloration from both the cold blue and oxidation. The metal shows scrapes and small scratches. The bottom metal also shows oxidation. The receiver and bolt show operational wear. The screw heads show heavy use. The markings are deep. Overall, this rifle rates in about Very Good Plus condition.

Box, Paperwork & Accessories: The rifle comes with a Certificate of Authenticity from the Civilian Marksmanship Program (CMP). The certificate is marked with the rifle’s serial number.

This Rock Island Arsenal Model 1903 was made back in 1910. We don’t know its service life but it was probably put to good use during WWI and WWII. At some point the rifle was Arsenal Rebuilt at the Raritan Arsenal and is marked accordingly on the stock. This rifle was eventually purchased through the Civilian Marksmanship Program (CMP) and comes with a CMP Certificate of Authenticity. The barrel, receiver and stock hardware had their finishes “touched up” after the CMP purchase. This Rock Island Arsenal 1903 looks good and has nice RIA markings on the barrel and on the receiver. It will add to your Military collection. Good luck.