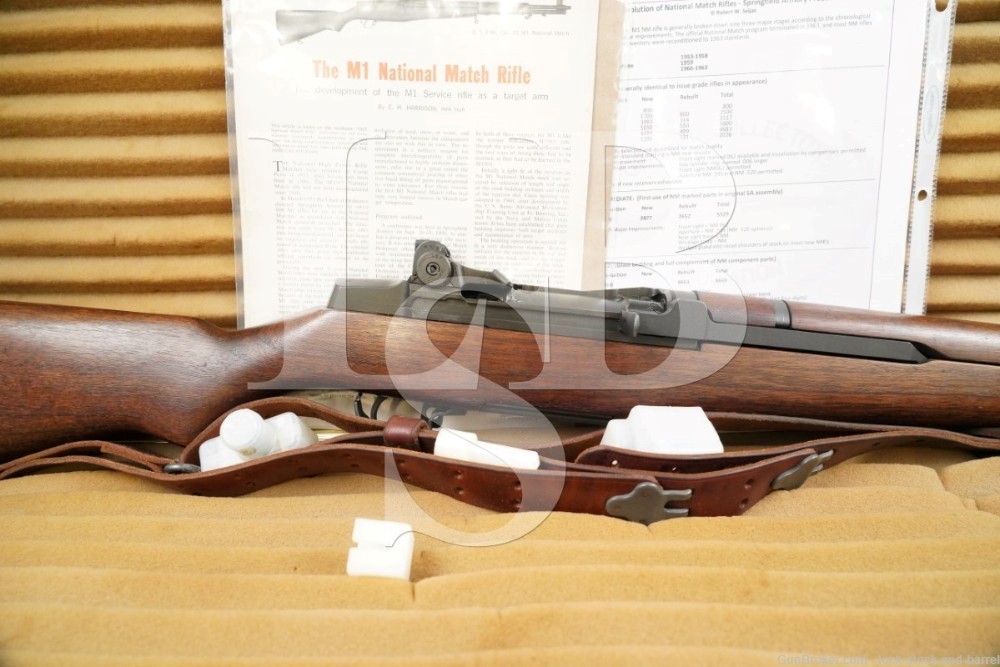 Stock Configuration & Condition: The left side of the stock (above the trigger) is marked with a Defense “Eagle” acceptance stamp. The face of the grip is marked with a “circled P” proof. The last 4 digits of the serial number are marked in the barrel channel which is a National Match marking (page 556 of Bruce Canfield’s book, The M1 Garand Rifle).
The front handguard was previously glued to the lower band. The glue is still visible but the handguard and band are no longer attached. The wood has been built up with a bedding compound to better fit the action and the trigger group. These modifications are consistent with a National Match rifle.
The hardwood stock has a pistol grip, metal nose caps, a stacking loop, two sling loops and a metal buttplate with hinged door for storage in the butt. The wood shows several scrapes, scratches, and compression marks. The most prominent are below the left side of the receiver. The LOP measures 13 inches from the front of the trigger to the back of the buttplate. The stock rates in about Very Good Plus to overall condition.

Bore Condition: The grooves are semi bright. The rifling is deep. There is no erosion. The bore shows an M.E. of 0.8. The throat shows a T.E. of 4.

Overall Condition: This rifle retains about 95% of its metal finish. The bottom rear of the receiver shows light thinning. The op rod shows an area of surface erosion and thinning. The metal shows scuffs and light handling marks. The gas tube assembly also shows light scrapes. The receiver and bolt show light operational wear. Most of the markings are deep. Overall, this rifle rates in about Very Good Plus to Fine condition.

Box, Paperwork & Accessories: The rifle comes with an invoice  that documents the purchase of a National Match M1 Garand from the Director of Civilian Marksmanship (DCM). The DCM became the Civilian Marksmanship program (CMP) 1996. The invoice is marked “Rifle Cal. .30, M1, N/Match” and with the rifle’s serial number.
The rifle is stored in a hard case and comes with an M1 National Match article, leather sling, metal oiler tube, combo tool, sight protectors and a chamber flag.
Please see photos as to the condition of the listed items.