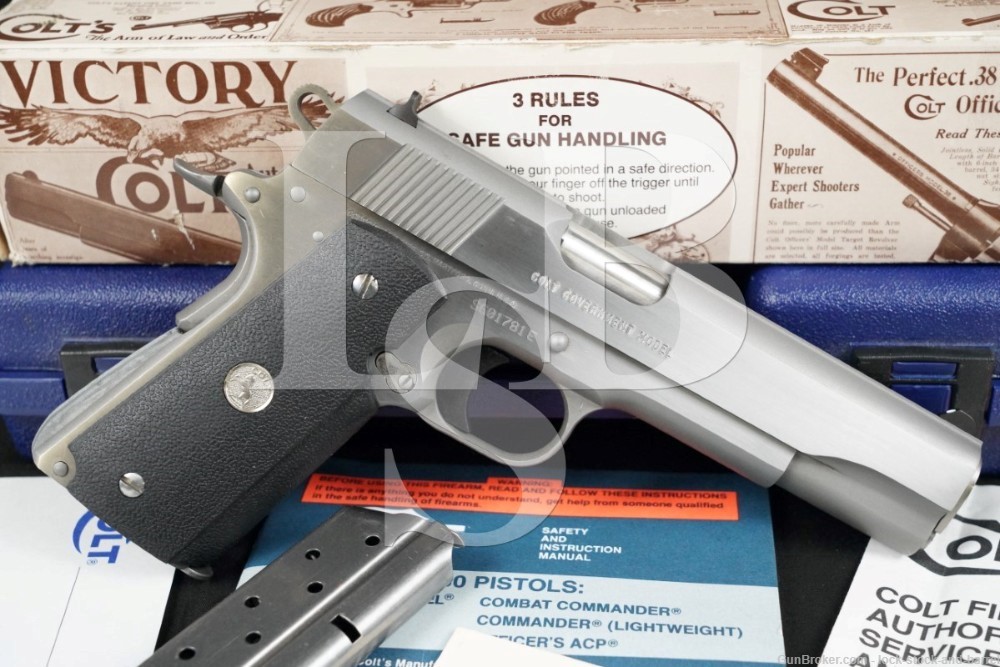 Stock Configuration and Condition: The grip is a one-piece textured rubber wraparound grip which has silver-colored Colt medallions. The grip has no notable wear or damage, only light handling marks. There are no rips or tears. Overall, the grip is in Excellent condition.

Overall Condition: This pistol retains about 98% of its metal finish. There are a few scattered minor scuffs and scratches, most notable on the right slide flat around the serrations and the left of the frame below the slide stop. The action shows faint operational wear. The screw heads are sharp. The markings are clear. Overall, this pistol is in Excellent condition.

Mechanics: The action functions correctly. The slide has minor play to the frame. The trigger is crisp. This pistol was made with a firing pin block safety (series ’80). We did not fire this pistol. As with all used firearms, a thorough cleaning may be necessary to meet your maintenance standards.

Box, Paperwork, and Accessories: This pistol comes in a blue plastic Colt case with serial-matching cardboard sleeve, an assortment of factory paperwork including manual and a total of two 9-round Colt magazines.

Our Assessment: The 1911 and 1911-A1 pistols served the military of the United States from 1911 to 1985, through two World Wars and the Korean and Vietnam wars. They gained a reputation as a reliable handgun with plenty of stopping power, and are held in high regard by those who have used them. The design was the end-result of a series of developments by famous gun designer John Browning, starting with the Model 1900. The advances made by Browning were revolutionary at the time, and were so successful that they are considered commonplace today. Browning not only developed first a pivoting and then a tilting barrel to allow for a locked system, he developed the concept of “the slide”, which is now synonymous with semi-automatic handguns. Having secured a contract for the US Military sidearm, Colt also offered the pistol to the commercial market as the “Government Model”. The design has seen some updates including a firing-pin block safety, higher profile sights, and more ergonomic grips, but the basic design and fantastic trigger remain the same after more than a century. This example is a MK IV Series 80 Government Model Enhanced made in 1992. The Enhanced variant comes from the factory with a beavertail grip safety, skeletonized hammer and an under-cut trigger guard. This example is constructed from stainless steel and is chambered for the .38 Super cartridge. It is in Excellent condition, retaining 98% of its finish, a great bore and strong mechanics. If you are looking for your first 1911 or your next, this would be a great addition to any safe in America. Please see our photos and good luck!