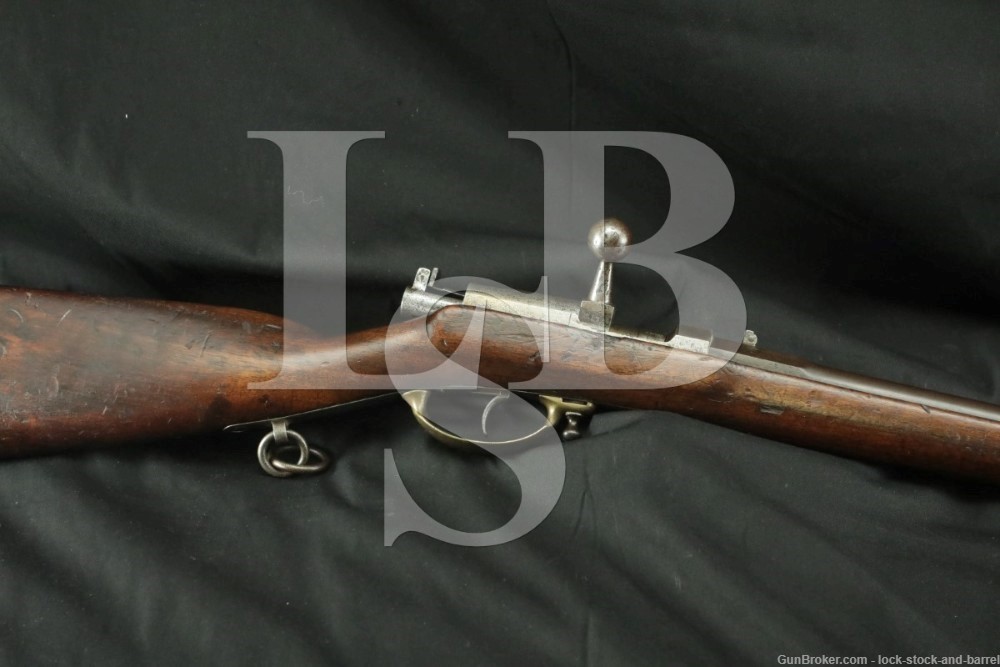 Make: The arsenal marking is worn and incomplete, but we believe this carbine was made by the Soemmerda (Sömmerda) Arsenal

Markings: The left of the receiver at the rear is marked “Soemm??? ND / Mod. 57”, the top-right is marked “1861”. The right of the receiver and barrel have a series of crowned gothic letters (Prussian military inspection marks) and there are several other crowned letters in other locations. The top-rear of the barrel is marked “Stahl” (steel). The top-left barrel flat is marked “585”. The left barrel flat is marked “877” and “FW”. The left-front of the receiver is marked “877”. The rear of the barrel inlet inside the stock is marked “877”. The left of the lug at the rear of the needle housing, the rear face of the cocking spring-tab and the trigger plate in front of the trigger guard are each marked “877”. The right of the trigger, rear of the bolt handle, the inside of the nosecap, the inside of the buttplate, the knob-headed screw at the front of the trigger guard (used to secure a sling or strap) and each of the screw heads are marked “77”. The top tang of the buttplate is unit-marked “19. / 14.D. R. / 3. E.” (we believe this is gun number 19 of the 14th Dragoon Regiment, company 3E, but have not been able to confirm). The stock appears to have a few markings, but with the wear it is unclear if these are markings or simply nicks/dings which appear to be markings.

Stock Configuration & Condition: The stock is a one-piece smooth hardwood with a full-length forend, nosecap which has integral protective ears for the front sight, straight grip, straight comb with cheekpiece, and brass buttplate. There is a saddle ring mounted to the trigger plate and there is a knob-headed screw at the front of the trigger guard which was used to secure a leather sling or strap in a slot (there is actually a small piece of leather still secured in this slot by the screw). The stock has many scattered nicks, dings, scuffs and scratches, the great majority are dark and oiled-over. There is a large crack in the left of the stock, extending back and then down and forward from the left-rear of the receiver. There is a small loss along the right edge of the trigger plate and another at the toe. The LOP measures.12 7/8″ from the front of the trigger to the back of the buttplate. The plate has scattered wear and some discoloration with a small crack at the toe at the location of the loss in the wood. Overall, the stock is in Good-Very Good condition as Antique

Type of Finish: The barrel and nosecap have been browned or perhaps cold blued in the distant past. Other metal surfaces were finished bright.

Finish Originality: The barrel and nosecap have likely been refinished. Other surfaces show wear and aggressive cleaning, but no signs of refinishing.

Bore Condition: The bore is light gray with deep, sharp rifling. There is scattered light erosion and infrequent minor pitting in the bore.

Overall Condition: This rifle retains about 40% of its metal finish. The finish of the barrel and nosecap has mostly thinned and gone to a light patina. The receiver and trigger plate have retained semi-bright surfaces, but they have scattered surface erosion and pitting with some discoloration from oxidation. The trigger guard has gone to a mustard patina. There are scattered light nicks, scuffs and scratches. There are tool marks around the rear sight assembly. The action shows operational wear. The screw heads range from sharp to tool marked with serviceable slots. The markings range from clear to worn and incomplete. Overall, this rifle rates in Very Good condition as Antique.

Our Assessment: Johann Nicolaus von Dreyse developed one of the first widely adopted breech-loading military rifles, not to mention the first bolt action rifle of any significance. The Prussian Army adopted his rifle in 1840 and it would prove to be a significant advantage from its initial adoption, staying in service all the way through the Franco-Prussian war of 1870 and 1871, being replaced by the Mauser 1871. The Dreyse design utilized a “needle-fire” paper cartridge. The bolt assembly had a long needle which, when fired, would pierce the rear of the cartridge and extend forward to strike a percussion pellet at the base of the bullet, lighting the powder charge. While this seems primitive today, it allowed Prussian troops to nearly quintuple their rate of fire when compared to opposing forces using muzzle-loading arms, even while prone. This example is a Model 1857 Cavalry Carbine, a short, lightweight rifle suitable for use by Prussian Cavalry. Despite being 160 years old, this carbine still retains serial-matching parts, a strong bore and strong mechanics. The installed needle does protrude from the face of the bolt, but we’re not certain how long it is supposed to be, it may have some material missing from the front end. There can’t be too many of these carbines that have survived, much less in this kind of condition, and fewer still that have made their way here, to America. This fascinating piece of Prussian/German military history will add nicely to any collection. Please see our photos and good luck!